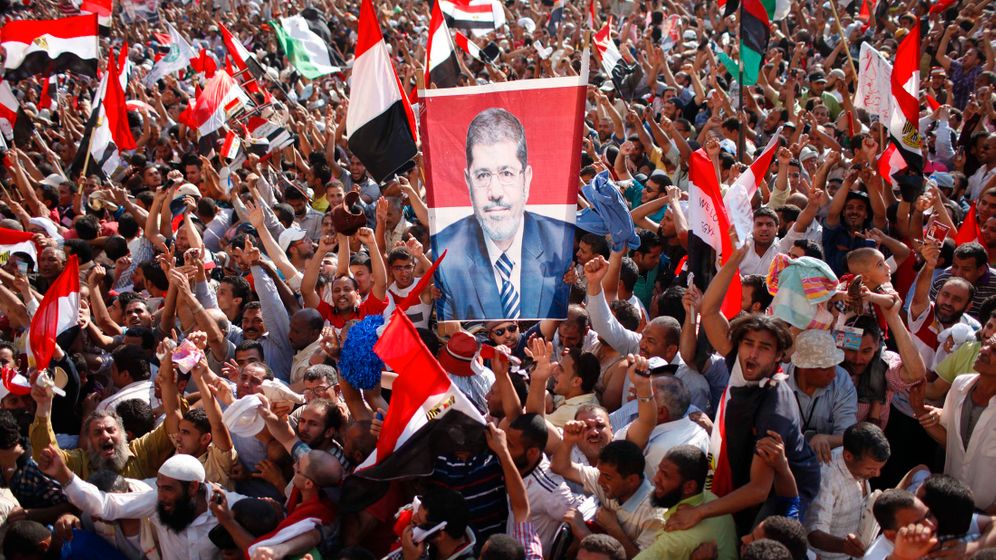 Egypt's president sat cross-legged on a green rug with his eyes closed and hands raised in prayer. His lips moved as Futouh Abd al-Nabi Mansour, an influential Egyptian cleric, intoned: "Oh Allah, absolve us of our sins, strengthen us and grant us victory over the infidels. Oh Allah, destroy the Jews and their supporters. Oh Allah, disperse them, rend them asunder."

This was a Friday prayer service held in the western Egyptian port city of Marsa Matrouh on October 19. The words of this closing prayer, taken from a collection of sayings attributed to the Prophet Muhammad, seemed quite familiar to Mohammed Morsi, Egypt's new president. A video clip obtained by the US-based Middle East Media Research Institute (MEMRI) shows Morsi murmuring the word "amen" as this pious request for the dispersal of the Jews is uttered.

The Muslim Brotherhood, which backs Morsi, has since removed a note concerning the president's visit to Marsa Matrouh from its website, and the daily newspaper al-Ahram has reported that the president must have been "very embarrassed" over the matter. Are such statements enough to dispel the incident?

Morsi has been in power for four months. In June, with the backing of the Muslim Brotherhood, Morsi won a narrow victory over a representative of the country's former regime. Many voters supported Morsi only out of fear of a return to the days of dictatorship. But the new president has remained an enigma to his people. Who is this man with an American Ph.D. in engineering, who sometimes presents himself as a democrat and a peacemaker and sometimes as a hard-line Islamist?

The tasks facing Egypt's first freely elected president remain unresolved. Indeed, these are immense economic and social problems that can't simply be waved away. At the same time, precisely the thing that secularists, leftists and Christians have long feared is coming true: Egypt is growing ever more religious.

For the last three weeks, the activists who previously protested against the country's military council and the old regime of Hosni Mubarak have once again been gathering regularly on Cairo's Tahrir Square. Their new opponent is the Muslim Brotherhood, which the demonstrators believe is in the process of establishing a new dictatorship -- but an Islamist one.

The protests are primarily directed against the Islamists' attempts to push a religious constitution on the country. A constitutional council convened by Egypt's parliament has suggested redefining the roles of church and state, with the "rules of Sharia" becoming the basis for the country's laws. This would also entail re-examining and renegotiating the issue of equality between men and women.

The committee is dominated by members of the Muslim Brotherhood and by Salafists; the secularists and Christians who once sat on it abandoned it in protest. "Laws like these will land us in the Middle Ages," says Ahmed al-Buraï, a lawyer who stepped down from the committee. "This would be the end of our 200-year-old civil state."

On October 12, when Morsi's detractors took to Tahrir Square for the first time, buses of Muslim Brotherhood supporters arrived, as well. These bearded men set one of the secularists' platforms on fire, threw stones at their opponents and shouted: "We love you, oh Morsi." More than 150 people were injured.

One Muslim Brotherhood spokesman later claimed that those who committed the violence were not organization members. Instead, he said they were so-called baltagiya, or groups of thugs hired by "dark forces" trying once again to drag the Brotherhood's name through the mud. Yet bloggers have proved that the Islamists had long-established plans to sabotage the event.

Images of protests against the president don't look very good on television, especially not when they are held on the very square that has become the global symbol of the Arab Spring. But although the atmosphere in Egypt is tense, Morsi is doing little to connect with his critics. After his electoral victory, he promised to be the president of "all Egyptians." He even announced his intention to leave the Muslim Brotherhood so as to be able to perform his role neutrally as well as his plan to install women and representatives of the country's Coptic Christian minority in high government positions. So far, nothing has come of those promises.

"He has yet to internalize the idea that the existence of an opposition is an important instrument of democracy," says Amr Hamzawy, a Cairo-based political scientist. "He's well on his way to creating a single-party system, just as it was under Mubarak."

Egypt's critical newspapers call this trend "ikhwanization," with "ikhwan" meaning "brothers." The process has seen the president and the Muslim Brotherhood bringing all state-run institutions under their control within a short period of time. This includes state-owned media, where critical editors-in-chief have been replaced with Morsi supporters.

The "Holy Koran," a state-run radio service that has traditionally been moderate in terms of religion, has also become "ikhwanized." It has declared that so-called liberals are nothing more than immoral heretics who have "fallen" from Islam and are bent on the single goal of destroying society, and it has asserted that only the president can lead the country to "true Islam."

In some parts of the country, Egyptians seem to be trying to outdo one another in their displays of piety. A teacher in the Luxor governorate, in southern Egypt, recently cut off the hair of two 12-year-old students after the girls refused to wear headscarves. The incidents sparked protests, and the teacher was transferred to another school.

When a Coptic Christian tried to order a beer in a suburb of Cairo last week, the waiter reacted violently. The government plans to massively restrict the consumption of alcohol, a move whose effects will also be felt by members of the country's Christian minority. Especially in Upper Egypt and in Alexandria, where religious tensions already existed under Hosni Mubarak, thousands of Christians are believed to have applied for visas for the United States and European countries.

The Men Behind the President

What has become of Morsi's promise to be an impartial president? "The boundaries between the office of the president and the leadership of the Muslim Brotherhood aren't defined," says Hamzawy, the political scientist, in an understated way.

Many Egyptians believe Morsi is still taking his cues from two men in particular. One is Mohammed Badie, a 69-year-old professor of veterinary science and the man to whom all members of the movement swear lifelong loyalty as the Brotherhood's "supreme guide."

The other, Khairat el-Shater, was initially the Muslim Brotherhood's presidential candidate, but he was disqualified before the election on account of having once been imprisoned for money-laundering -- although this was admittedly under Mubarak, who used his justice system to sideline political opponents. Shater, a millionaire with good connections to the Gulf states, is considered an important financial backer of the Muslim Brotherhood and is believed to have been Morsi's direct superior within the organization.

Shater has considerably expanded his empire of supermarket chains and textile and furnishings shops in the new Egypt. Likewise, he's viewed as a model businessman among the Muslim Brotherhood, which has so far continued Mubarak's neoliberal economic policies. It's an approach meant to win the trust of the foreign investors that Egypt so desperately needs.

Mubarak left his successor a country deeply in debt, where millions of people are unemployed and a quarter of the population lives below the poverty line. For years, salaries were constantly kept low and unions were suppressed.

Keeping Egypt from national bankruptcy will eventually require unpopular decisions, such as cuts to gas and bread subsidies. But, so far, Morsi has decided to wait it out. The only area where he has been active is a different one entirely: In a television address last week, Morsi announced a new religious campaign that will see an army of preachers fan out through the country "spreading the true word among the people." It's a re-education measure that may yet help to dislodge Western ideas from people's heads -- such as the absurd belief that religion is a private matter.