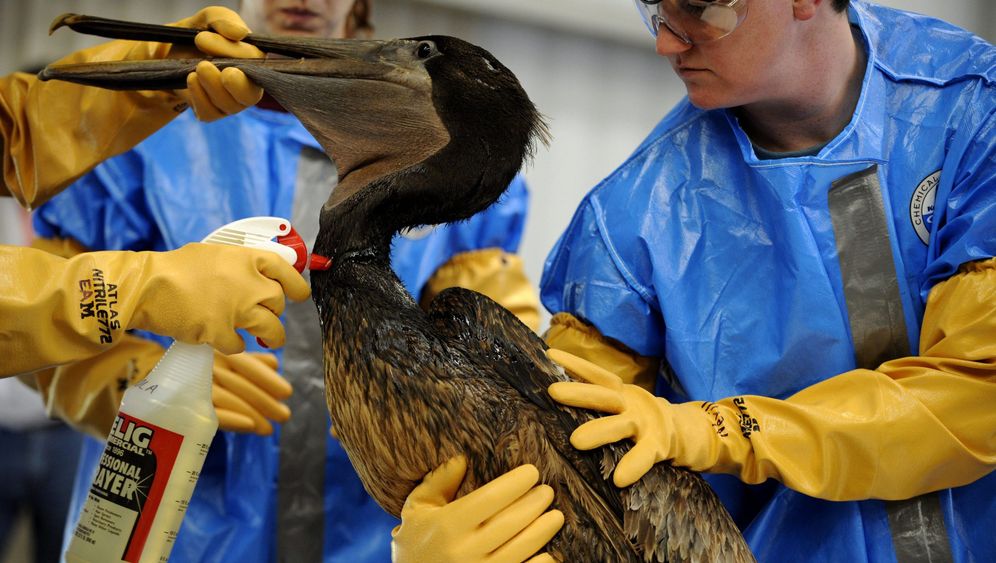 "Kill, don't clean," is the recommendation of a German animal biologist, who this week said that massive efforts to clean oil-soaked birds in Gulf of Mexico won't do much to stop a near certain and painful death for the creatures.

Despite the short-term success in cleaning the birds and releasing them back into the wild, few, if any, have a chance of surviving, says Silvia Gaus, a biologist at the Wattenmeer National Park along the North Sea in the German state of Schleswig-Holstein.

"According to serious studies, the middle-term survival rate of oil-soaked birds is under 1 percent," Gaus says. "We, therefore, oppose cleaning birds."

In the path of the spill are several large protected areas for wildlife, including a vital nesting area for thousands of brown pelicans which were only removed from the US Endangered Species Program last year. Louisiana's Breton National Wildlife Refuge is by itself home to 34,000 birds. So far, the vast oil slick has yet to make significant landfall, limiting the numbers of birds affected, but observers worry that it is only a matter of time before beaches along America's Gulf Coast become blackened.

Catching and cleaning oil-soaked birds oftentimes leads to fatal amounts of stress for the animals, Gaus says. Furthermore, forcing the birds to ingest coal solutions -- or Pepto Bismol, as animal-rescue workers are doing along the Gulf Coast -- in an attempt to prevent the poisonous effects of the oil is ineffective, Gaus says. The birds will eventually perish anyway from kidney and liver damage.

Gaus speaks from 20 years of experience, and she worked on the environmental cleanup of the Pallas -- a wood-carrying cargo ship that spilled 90 tons of oil in the North Sea after running aground in October of 1998. Around 13,000 birds drown, froze or expired due to stress as a result of the Pallas spill.

Once covered in oil, a bird will use its bill and tongue to remove the toxic substance from their feathers. Despite oil's terrible taste and smell, a bird will still try and clean itself because it can't live without fluffy feathers that repel water and regulate its body temperature. "Their instinct to clean is greater than their instinct to hunt, and as long as their feathers are dirty with oil, they won't eat," Gaus says.

Kill Them 'Quickly and Painlessly'

But it's the instinct of biologists, who often feel compelled to save the birds out of duty and ethical reasons, that will ultimately lead a bird to a worse death, say some. It would be better to let the birds die in peace, Gaus says, or kill them "quickly and painlessly."

Even dyed-in-the-wool preservationists from the WWF agree with Gaus. At the time of the 2002 Prestige oil spill off the coast of Spain, a spokesman from the organization said: "Birds, those that have been covered in oil and can still be caught, can no longer be helped.  Therefore, the World Wildlife Fund is very reluctant to recommend cleaning."

The Prestige spill killed 250,000 birds. Of the thousands that were cleaned, most died within a few days, and only 600 lived and were able to be released into the wild. According to a British study of the spill, the median lifespan of a bird that was cleaned and released was only seven days.