A German frigate in the Gulf of Oman headed off an attack on a cruise ship by two speedboats last Friday, according to a German Defense Ministry presented to parliament this week. Two "suspect" speedboats travelling towards the German ocean liner MS Astor in the Gulf of Oman were fired on by machine guns on the frigate Mecklenburg-Vorpommern, according to the report. The speed boats dashed away in another direction, it said. 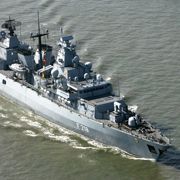 The Astor was sailing from Sharm-al-Sheikh in Egypt to Dubai on Nov. 28 when the suspected pirates first appeared at a distance of about three miles. The German frigate steered into their path "when these (boats) turned toward the Mecklenburg-Vorpommern, the frigate fired warning blasts from a machine gun," according to details from the report obtained by SPIEGEL ONLINE.

The boats then moved "at high speed into Yemeni territorial waters."

The Astor carried 492 guests, according to Transocean Tours in Bremen. It arrived safely in Dubai on Tuesday and none of the guests noticed the attack, a spokesman said.

The incident was separate from a widely-reported attack on Sunday, in which an American cruise ship called the Nautica accelerated to outrun pirates in speed boats. The boats had given chase to the Nautica in the Gulf of Aden and even opened fire with rifles.

Last Friday, though, was a busy day for the Mecklenburg-Vorpommern. Before it intercepted the two speedboats, it dispatched a helicopter to rescue three crew members from a cargo ship called the Biscaglia who had jumped overboard during a successful pirate attack. The Biscaglia was a Liberian-registered chemical tanker, hijacked that morning in the Gulf of Aden by Somali pirates.

The Mecklenburg-Vorpommern is patrolling waters off Oman and Somalia as part of a UN-sanctioned anti-piracy unit called Task Force 150, which grew out of Operation Enduring Freedom in Afghanistan. Germany will send another frigate to the area with the EU's Atalanta project, which is due to begin Dec. 8. Germany will clarify its legal role in certain aspects of the mission -- like arresting pirates -- only two days later, on Dec. 10.

Atalanta will take over from a third anti-piracy force, organized by NATO, which sailed for the region in October as hijacking attempts off Somalia became hard to ignore.

Western governments are still trying to work out how to fight piracy in the lawless waters off the Horn of Africa, where ships have to funnel from the Arabian Sea and the Indian Ocean towards the Suez Canal. Denmark, which also contributes to Task Force 150, has considered placing elite military SEALs on freighters just as they pass through the region, according to the Danish newspaper Politiken.

"We have a plan that works like a pilot system in which freighters either take on security guards or soldiers when they enter the area, and land them on another vessel when they leave the area", said Danish Commodore Bigum Christensen, who serves as operational commander for Task Force 150.

"About half of the vessels have private security companies on board, and we can see that it works," he said. "It's a sensitive issue, but it works."