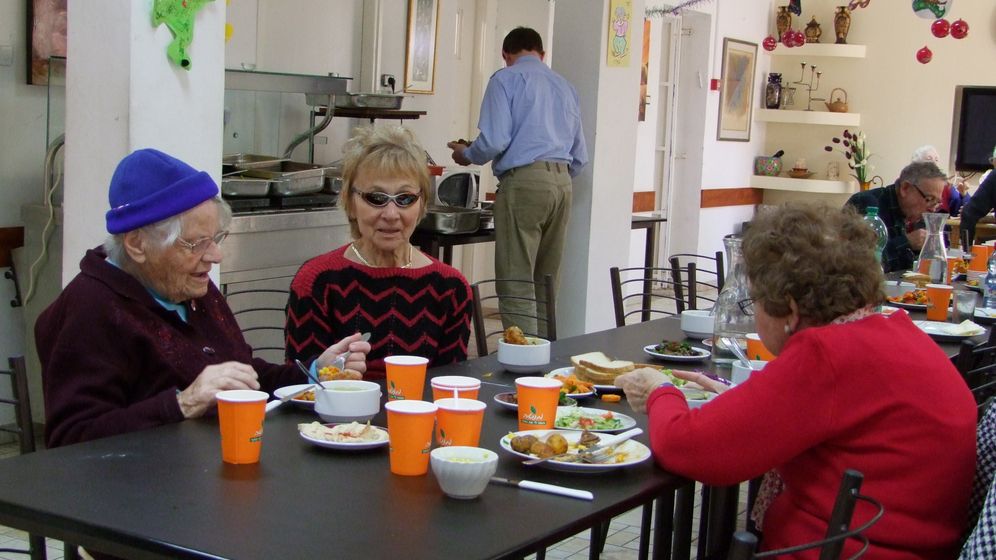 Sarah Samir speaks softly and leans forward so she can hear better. Although she hasn't spoken German in more than 50 years, the words flow freely. After the war, the Holocaust survivor had no desire to use German -- her own native language and that of Hitler -- ever again, she says.

Samir, 83, came to what is now Israel in 1945 at the age of 17. She was born near the then-German city of Breslau (today's Wroclaw), but fled to Belgium with her grandmother in 1939. Her father died in a concentration camp in southern France, and her mother and brother both died in Auschwitz. A Christian family in Belgium saved her from the Nazis by letting her hide in their home. After the war, the family offered to adopt her, but she declined.

"I wanted to stay Jewish," she recalls.

She emigrated to Israel, where she married and raised six children according to Jewish religious traditions. Her husband has since passed away and her children are fully grown with families of their own, but Samir still practices her religion in her adopted homeland. Each Friday, she joins about 20 friends and family to celebrate Shabbat at Helping Hands, Israel's first and only residence for elderly Holocaust survivors, located in the northern city of Haifa.

The situation for many of these survivors is grim. A report issued in 2008 by Israel's National Commission of Inquiry into the Assistance Given to Holocaust Survivors confirmed that about one-third of Israel's roughly 210,000 Holocaust survivors live beneath the poverty line.

Free Housing and Care for Survivors

Shimon Sabag is the founder of the home and director of the charity organization Yad Ezer L'Haver -- Hebrew for "a helping hand to a friend." He began operating soup kitchens after an injury in a car accident some 20 years ago led him to rethink his life goals. He says he recognized the need for an old people's home when the number of Holocaust survivors visiting the soup kitchens began to surge.

As a first step in helping the survivors, he purchased a building in a quiet side street in Haifa's Hadar neighborhood and provided a home to a dozen of them. "He who helps one person helps the whole world," Sabag says, referring to a teaching from the Talmud.

Sabag says his mother inspired him to create the Helping Hands home. The only member of her family to survive the Holocaust, she always opened her family's home in Kiryat Ata, a suburb of Haifa, to others. "My mother lived in a big house and welcomed people who needed help," he says.

And it's the kind of help that more and more Holocaust survivors require. The 2008 report on assistance to Holocaust survivors, which is critical of the Israeli government, reveals why private initiatives like Sabag's are so important. It claims that the government "took funds from the Conference on Jewish Material Claims Against Germany, the source of which was Jewish property stolen during the Holocaust for which there were no successors and which, by the nature of things, ought to have been earmarked solely to help Holocaust survivors, and used it to finance national institutions serving the general public."

In response to the so-called Dorner Report, named after retired Supreme Court judge Dalia Dorner, who headed the commission, then-Prime Minister Ehud Olmert and Finance Minister Ronnie Bar-On agreed to increase the monthly stipend of 40,000 Holocaust survivors in Israel. Many Holocaust survivors still rely on individual payments and pensions from Germany. However, immigrants who came to Israel before its bilateral reparation agreement with Germany took effect in 1953 don't have access to the same kind of assistance. The government has followed the recommendation of the commission and raised their payments to 75 percent of the average pension the German government gives to eligible survivors.

The cost of implementing the recommendations from the report has been about 380 million Israeli shekels, or €74.4 million ($107.2 million), according to a spokesperson for Israel's Interior Ministry. "The Authority for Holocaust Survivors Rights in the Ministry of Finance works in various ways to increase and widen the assistance to Holocaust survivors," the Interior Ministry said in a statement.

Still, many Holocaust survivors spend what should be their golden years in poverty. Those from the former Soviet Union are especially hard hit. Most came to Israel later in life when they were already retired and spoke little or no Hebrew. Many never worked in Israel and therefore never paid into a pension fund. Negotiations in 2009 between the Claims Conference and Germany made special funds of €33 million available to such survivors in 36 countries, including Israel and the United States.

"We heard so many stories of people having to decide whether to pay their electricity bill or to buy medicine," says Yudit Setz, deputy director of the aid department of the International Christian Embassy in Jerusalem (ICEJ), a Christian Zionist organization. The ICEJ was founded in 1980 following a controversial decision by the Israeli parliament, the Knesset. At that time, Israel declared Jerusalem as its undivided and eternal capital, and several countries moved their embassies to Tel Aviv in protest. In response, a group of Christians decided to establish its own embassy to "stand with the Jewish people." Christian Zionists regard the establishment of Israel as fulfilling Biblical prophecy and feel that they as Christians have a duty to support the Jewish state.

The German chapter of ICEJ provided 60 percent of the funding for the survivors' home in Haifa. "Our German director, who is also the international director, had asked me to find a project for Holocaust survivors," Setz explains. The remaining 40 percent of financing for the home came from private donors and Yad Ezer L'Haver funds, and the Israeli government also contributes subsidies.

In addition to ICEJ's Germany chapter, other German evangelical Christian groups are also stepping in to help Holocaust survivors. Retired police officer Siegfried Wiegand and his wife Renate recently visited the home as representatives of the Friends of Israel in Saxony, a group from the eastern German state. The Christian charity regularly sends workers to help renovate the new buildings bought for the survivors. Members said their motivation comes straight from Isaiah 40:1 in the Bible: "Comfort, comfort my people."

"That we, as the second generation after the perpetrators (of the Holocaust), are allowed to comfort the victims is a blessing," Wiegand says. The Germans paint walls and lay tiles for two weeks at a time, sleeping on the construction site, in order to help Sabag save money.

'Without Them, There Would Be No State of Israel'

Some of the home's residents don't feel Israel's government should be criticized for not providing greater assistance to Holocaust survivors, even if they were once young people who helped build the Jewish state after its founding in 1948.

"Israel is a very poor country," says Haia Kaspi, 77. "The government couldn't give us what we needed -- they gave a little, but couldn't give more." The Romanian-born Holocaust survivor immigrated to Israel immediately after its declaration of independence.

At the end of the war, Kaspi was a seven-year-old girl who had lost her family in forced labor camps, over-crowded deportation trains and death marches. She spent a couple of years in the Netherlands, where she was taught Hebrew by American Jews in preparation for her new life in Israel.

Kaspi, who moved into the Haifa residence after her children left home, says that being part of a community of survivors has made her feel better. The retired childcare provider values the friendships and the fact that they share a common language, Hebrew. She says that Sabag, the son of a survivor himself, provides "everything we ask for."

For many years, Israel had an ambivalent relationship with its Holocaust survivors. Experts in the field of caring for Holocaust survivors say it was the 1961 trial of Adolf Eichmann -- the Nazi leader who was indicted, convicted and executed in Israel for his role in orchestrating the Holocaust -- that was the turning point in the relationship between those who had survived the death camps in Europe and those who came before or after World War II and did not suffer directly.

The Eichmann trial raised awareness of what survivors had gone through, explains the ICEJ's Yudit Setz. "Before, they were told, 'this is over -- you are an Israeli now.'"

There was also a complicated relationship between Holocaust survivors and the generations of Israelis born after World War II.

"In the early years following the Holocaust, the fact that Jews went to the slaughter without violent struggle was a source of embarrassment both for the survivors and collectively," explains Dan Lainer-Vos, an assistant professor of sociology and Jewish studies at the University of Southern California in Los Angeles.

'We Owe These People So Much'

Sarah Samir first moved into Helping Hands in 2010. After her husband died, her children began to worry about who would take care of their mother. Michal, 40, Samir's youngest daughter bumped into a fundraiser for Yad Ezer L'Haver on her way home from the supermarket one day. "When I heard of this, I thought it was like a gift, a dream come true," she says, her blond hair firmly tied back in a long braided ponytail.

Michal Samir can barely conceal her deep disappointment with the Israeli government, which she feels should do more to help survivors. "I think they count on the fact that they just become fewer and fewer as they die, and the problem just solves itself," she says.

"But we owe these people so much," she adds. "Without them, there would be no state of Israel."