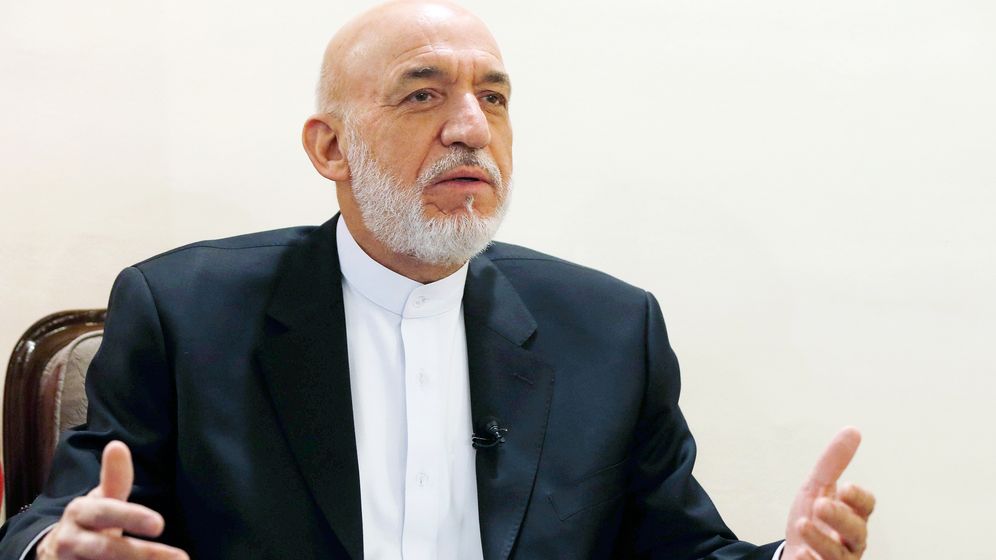 Hamid Karzai was the first democratically elected president of the Islamic Republic of Afghanistan. A member of the Pashtun ethnic group, Karzai governed the war-torn country after the U.S.-led invasion of December 2001 for 13 years. Today, the 60-year-old still has considerable influence, especially among the clans in southern Afghanistan.

In an interview with SPIEGEL ONLINE, Karzai paints a grim picture of the situation in his homeland. The number of extremists continues to grow, neighboring states are using the country as a venue for their geopolitical power struggles, and the former president accuses the U.S., first and foremost, of being too forgiving of Pakistan, the Taliban's most important supporter. Karzai, however, praises Germany's role.

The former head of state is keeping his political future open. He isn't completely excluding the possibility of running in next year's presidential election.

SPIEGEL ONLINE: From the perspective of the West, the war in Afghanistan cannot be won. Yet it hasn't come to an end. Why not?

Hamid Karzai: Initially, after the tragedy of September 11, we succeeded very, very well. Afghanistan was liberated from the Taliban, women won back their rights, institutions were built. But when it comes to the fundamental reason for the intervention in Afghanistan -- the defeat of terrorism and extremism -- we failed together and we failed miserably. The loss of Afghan and international lives, and of property and much more, has been massive. On top of that, the extremists have grown by the thousands and we now have the Islamic State operating in Afghanistan. How do you explain this to the Afghan people? How do you explain this to the American people? How do you explain this to the German people? Or to our neighbors? How come, after all that sacrifice, after all that money spent, we don't have anything to show for it?

SPIEGEL ONLINE: What consequences do you draw from this bitter insight?

Hamid Karzai: The only solution to the conflict in Afghanistan is through peaceful means -- political solutions which have to include everybody, even the Taliban. We are willing, as a nation, to forgive all that has happened. Everyone involved needs to come together. We need a new beginning and a new contract. When the U.S. came to Afghanistan with its allies, we had the perfect cooperation of major powers: Russia, China, Saudi-Arabia, Iran. One reason for the initial success in Afghanistan was that cooperation. Today, unfortunately, that cooperation has given way to suspicion and rivalry. Now they try to weaken each other in Afghanistan. And the price is always paid by the Afghans.

SPIEGEL ONLINE: Do you have a solution?

Karzai: One of the ironies of the situation is that while the United States knew about and told us about the sanctuaries and the training grounds in Pakistan and that all that violence was coming to us from Pakistan, they treated Pakistan as an ally and supported the Pakistani army with billions of dollars and continue to do so today.

SPIEGEL ONLINE: Pakistan is an official ally of the West.

Karzai: The Americans are feeding the hand that kills their own and our soldiers, as well as countless civilians. I could never understand this. It became the fundamental reason for disagreement between us and the United States. It led to the United States conducting operations all over Afghanistan and caused so much death and destruction in Afghan villages, in Afghan homes. This is major mistake and we want that corrected. We don't want America to be enemies with Pakistan, but we want America to be truthful with Afghanistan.

SPIEGEL ONLINE: Ever since the Taliban raided and plundered Kunduz in 2015, destroying 10 years of reconstruction in just a few days, many Germans have completely given up hope for Afghanistan.

Karzai: That was not your fault. And there is a bigger picture: German contributions have been very important economically, in the training of the security forces, the political impact. I want you to tell the German people that Germany has done a lot that has left a lasting impact in Afghanistan.

SPIEGEL ONLINE: Your differences with the Americans were viewed as irreconcilable, but only a couple of days ago, U.S. Ambassador John Bass reached out to you. Could you imagine working with President Donald Trump?

SPIEGEL ONLINE: Afghanistan is holding elections in May 2019. Are you going to run against President Ashraf Ghani?

Karzai: I was a democratically elected president. I left a legacy and I don't want that legacy to become tainted. The Afghan constitution only allows two terms.

SPIEGEL ONLINE: Some legal scholars interpret the constitution differently, arguing that a president has to take a break after two terms, but can run again afterwards.

Karzai: If there is an absolute need for it, and if all political groups agreed, why not?