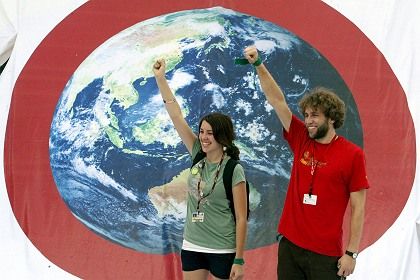 The last-minute deal came as a relief.

After two weeks of intense discussions and bitter wrangling, delegates from over 180 nations at the Bali climate summit reached agreement on a two-year "roadmap" for finding a successor to the Kyoto Protocol.

The last-minute deal came on Saturday after the US delegation made a U-turn in a final negotiating session. The US had opposed a proposal by the G77 bloc, which represents developing countries, for rich nations to do more to help the developing world combat increasing greenhouse gas emissions.

Paula Dobriansky, leader of the US delegation, and her colleague James Connaughton found themselves the targets of naked animosity. When Dobriansky announced that the US would not sign up for the Bali roadmap, boos echoed through the room. The Americans were sharply attacked by several delegations. "If you're not willing to lead, please get out of the way," said a US environmental activist representing Papua New Guinea.

Other opponents of binding targets for reducing greenhouse gas emissions, such as Japan or Russia, failed to come to the US delegation's defense. Left isolated, the American delegation gave in and agreed to the roadmap. "We will go forward and join consensus," said Dobriansky. This time the delegation was rewarded with a standing ovation from some participants.

German Environment Minister Sigmar Gabriel told reporters he was on the verge of sending a mobile phone text message to Chancellor Angela Merkel, asking her to intervene with the White House, when the US delegation reversed their position. "I had already typed the SMS after Dobriansky's first statement but then I was able to cancel it," Gabriel said.

Gabriel was cautiously optimistic about the deal. "Bali has laid the foundations ... it was hard work and exhausting," he said. "But the real work starts now." Earlier in the week, Gabriel had warned that the EU might boycott US-led climate talks if the US delegation did not budge.

UN Secretary General Ban Ki-Moon returned to Bali to try to break the summit deadlock after talks, due to end on Friday, extended into Saturday. He expressed his pleasure at the result. "This is the defining moment for me and my mandate as secretary general," he said, adding that he appreciated the "spirit of flexibility" shown by certain delegations.

Indonesian Environment Minister Rachmat Witoelar, who acted as conference president, was also pleased with the outcome, describing it as "a real breakthrough."

However the roadmap does not include the firm emission reduction targets which the European Union and the Intergovernmental Panel on Climate Change had been demanding, although it does state that emission cuts are necessary. Environmental groups and some delegates criticized the draft for not going further, describing it as a missed opportunity.

Under the roadmap approved at the Bali summit, nations will hold a two-year series of talks to negotiate a new treaty which will succeed the Kyoto Protocol after it expires in 2012. According to the plan, the successor treaty will be adopted at a UN climate conference in Copenhagen in late 2009.

The roadmap also includes measures to promote the transfer of environmentally friendly technologies to developing countries and to halt deforestation. It also launches a so-called "Adaptation Fund" which will help poor countries cope with the negative consequences of climate change, such as rising sea levels.