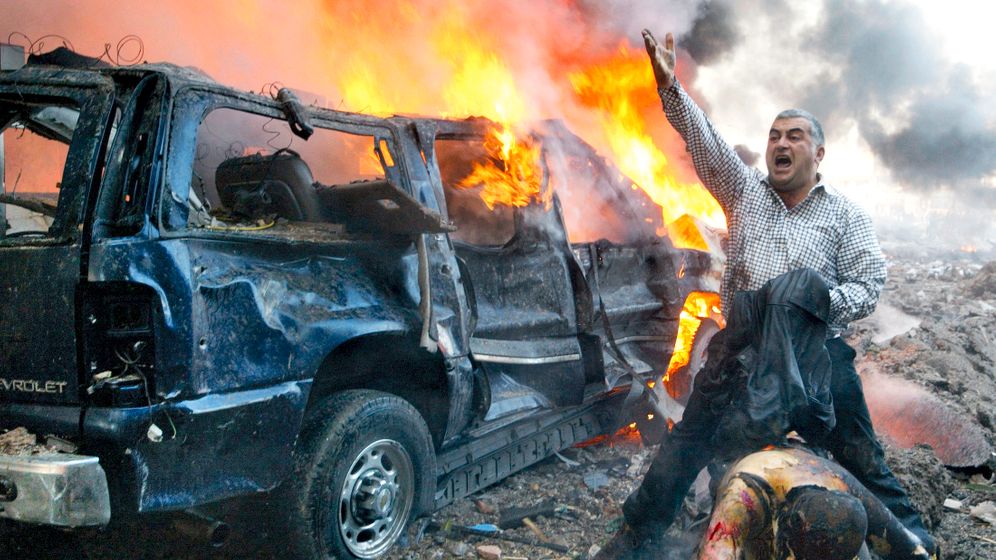 Hassan Nasrallah is a stern man, as uncompromising toward others as he is toward himself. While giving an inspirational speech to his troops in 1997, the Hezbollah leader was handed a slip of paper. His son Hadi had just been killed in a gun battle with the Israelis. Nasrallah carried on as if nothing had happened, indicating that there would be time enough for mourning later. For the secretary general of the radical Shiite "Party of God," everything has a higher purpose. His mandate is "resistance" against Israel and the political reshaping of Lebanon -- under his ideological leadership, of course.

Triumph and loss have rarely coincided as closely in the life of Nasrallah, 50, as they have in recent days. He was instrumental in bringing the new government in Beirut into office a few weeks ago. But on the Thursday before last, a United Nations special tribunal indicted some of his closest associates on murder charges. Nasrallah, who is highly popular in the Arab world, maintains excellent relations with Syria and Iran and is secretly in talks with Turkey and France, will now play a key role. Whether and how he performs that role will be critical to shaping the future of the entire Middle East.

In a television address to the people, Nasrallah called the four Hezbollah members indicted by the UN Special Tribunal for Lebanon (STL), which is based near The Hague, "brothers with an honorable past." The accused would not be extradited, he said, "not in 30 days, and not in 30 years," and he warned that he would "cut off the hand" of anyone who tried. He called the tribunal an "American-Israeli conspiracy" that aimed to reignite the civil war in Lebanon.

The crime that took place at 12:56 p.m. on Feb. 14, 2005, Valentine's Day, was a monstrous one. A giant bomb exploded in front of the Hotel St. Georges in Beirut just as the motorcade of former Prime Minister Rafiq Hariri was driving by. In addition to the former prime minister, nicknamed "Mister Lebanon," 20 people, including bodyguards and passersby, died in the inferno. The incident rocked the Arab world. Why did Hariri have to die? Who committed the crime, and who were the backers?

At the request of the Lebanese government, the United Nations would soon tackle the case. An ad hoc criminal court was created in 2007, the first in UN history to address a terrorist crime. Beirut agreed to pay a portion of the costs of the international body. Saad Hariri, 41, who considered the investigation of his father's murder to be above all political considerations, was especially committed to the STL.

The tribunal was periodically in the news. Detlev Mehlis, its German chief investigator, had four pro-Syrian Lebanese generals arrested, but they had to be released again after witnesses proved to be less than credible. However, the suspicion that Damascus could have been involved in the Hariri assassination has not been set aside to this day.

In May 2009 SPIEGEL, citing sources close to the tribunal, published a detailed report on the possible motives for the assassination. The report identified Hezbollah commanders Mustafa Badr al-Din and Hajj Salim Ayash as the presumed suspects. At the time, Nasrallah threatened to sue the author of the story and the magazine. Now Al-Akhbar, a newspaper with ties to Nasrallah, is even calling the STL indictment "a SPIEGEL decision."

Nasrallah knows what is at stake for him. Saad Hariri called the arrest warrants an "historic moment" and a "turning point in the history of fighting organized political crime in Lebanon." The parliamentary group consisting of his Future Party and its allies is almost as strong as Hezbollah. And although Nasrallah can rely on most members of the government, not all are his allies. Referring to the four Hezbollah members indicted by the STL, Interior Minister Marwan Charbel said: "We will find their addresses, raid (their houses) and arrest them."

Under international law, the Lebanese government has no choice but to extradite the men. UN Resolution 1757 requires it to cooperate fully with the tribunal and, in the event of noncompliance, includes the possibility of sanctions once the case has been turned over to the Security Council.

That point has not been reached yet. For now, Beirut has "30 business days after the delivery of the indictment" to submit a report on its efforts to serve the arrest warrants. If this does not lead to an arrest, as is expected, the STL will display wanted posters worldwide, particularly in Lebanon. This would be followed by a trial in absentia. After past missteps, the tribunal is taking pains to ensure that the process is handled fairly.

Daniel Bellemare, the chief prosecutor in The Hague, counters Nasrallah's charges that the STL is a "corrupt and biased" institution with the assurance that the STL will seriously review information from Hezbollah's leader relating to possible Israeli involvement in the crime. Bellemare has also told SPIEGEL that he has "great confidence" in the Lebanese criminal prosecutors, and that he is even willing to travel to Beirut and meet with Nasrallah.

Additional STL indictments are not out of the question, possibly against Syrian intelligence or military officials who may have "inspired" the Hariri assassination. However, Syrian President Bashar Assad is not formally required to provide information to the UN tribunal. Besides, now that the uprising in his country has Assad with his back to the wall, the Hariri case is not exactly one of his most pressing problems.

The turmoil in neighboring Syria and the worldwide condemnation of Assad's brutality is bad news for Hezbollah. Damascus is traditionally a strong supporter of Hezbollah. No one knows whether a new regime in Syria would continue to allow weapons for Hezbollah to be brought across the Chouf Mountains.

That would leave the Shiite theocracy Iran as Hezbollah's partner and principal financial backer. Tehran is firmly committed to Hezbollah, which it sees as its most important bridgehead to the Arab world. It is possible that the two main suspects in the Hariri attack have already gone to Iran, which would be familiar territory for them. They were trained there and have been working closely for years with their Iranian contact, Qasim Sulaimani, a general in the Revolutionary Guard.

An Embarrassment for Hezbollah

Hezbollah intelligence chief Badr al-Din, 50, is believed to be the organizer of the assassination. He is a member of Hezbollah's governing body, the Shura Council, and he was reportedly involved in terrorist attacks in South America against Jewish targets and in Kuwait, where he was arrested and sentenced to death. In the confusion surrounding the Iraqi occupation of Kuwait in 1990, he managed to escape from prison and, with the help of the Iranian embassy in Kuwait, returned to Lebanon.

The suspected leader of the attack was Salim Ayash, 47, the head of a secret military "special unit for operatives" within Hezbollah. The two other suspects are not considered to be as important, and some in Beirut speculate that they may already have been liquidated "internally."

As strong as Tehran's support for Hezbollah is, there are currently considerable problems with financing. Contrary to Israel's consistent claims, militant Shiite Hezbollah does not have access to a constant flow of cash.

In recent months, Hezbollah has become involved in disastrous investments, losing almost €1 billion ($1.4 billion). The Iranians, who are now feeling the brunt of the UN sanctions imposed as a result of their nuclear activities, have made it clear that they cannot provide Hezbollah with additional funding at this time. This is embarrassing for Hezbollah, whose image in Lebanon depends in large part on its generous social services. It is now falling behind in the rebuilding of homes it had promised to Hezbollah's Shiite followers after the destructive 2006 bomb attacks. Israel began massive bombing strikes in Lebanon that year after Hezbollah abducted two Israeli soldiers in a cross-border raid.

Western intelligence agencies believe that they have identified a new Hezbollah income source: the drug trade. Iranian weapons shipments to the Lebanese were reportedly "enriched" with large quantities of heroin and cocaine. The drugs were then allegedly shipped to their final destination, Western Europe, through the Turkish Cypriot port of Famagusta. The Iranian representative of the Revolutionary Guard in Beirut, Hassan Mahdavi, allegedly mentioned, in a telephone conversation, a "drug tsunami" that could flush millions into Hezbollah's coffers.

Nasrallah is unlikely to approve of such activities. He has always fought the "drug scourge," even cooperating on the issue with the hated Hariri government in 2010. He is now trying to perform a balancing act that cannot possibly go well -- between being a statesman and a supporter of terrorists, and between opposing civil war and possibly profiting from one. He wants to be part of the democratic process, and yet he insists that he is above the law.

After Nasrallah had managed to destroy former Prime Minister Saad Hariri's pro-Western alliance at the beginning of the year by convincing some of Hariri's supporters to defect to his camp, the new prime minister, Najib Mikati, 55, was finally able to present his new cabinet in mid-June. Mikati, a wealthy Sunni businessman, is considered a moderate and has also included representatives of Christian groups in his team. Nevertheless, Hezbollah dominates the cabinet.

For the first time the movement, whose militia is more powerful than the regular Lebanese army, has also established itself as the dominant political force. Although Hariri calls it a "coup," Hezbollah formally adhered to the democratic rules of engagement. Nasrallah, for his part, portrays himself as a peacemaker. He says that by no means does he intend to play off the Shiites, who make up an estimated 40 percent of the population, against the Sunnis or the Maronites. And he insists that Lebanon, with its fragile religious makeup, should be a unified, democratic country. But he also wants it to serve as a front line against "the Zionist enemy."

The Mikati government narrowly won a parliamentary confidence vote on Thursday. The prime minister promises to cooperate with the tribunal "in principle, provided it is not detrimental to our national interest." To be on the safe side, the government has already indicated that the Lebanese authorities have issued warrants for the arrest of thousands of people. Unfortunately, despite all official efforts, those individuals are not to be found.