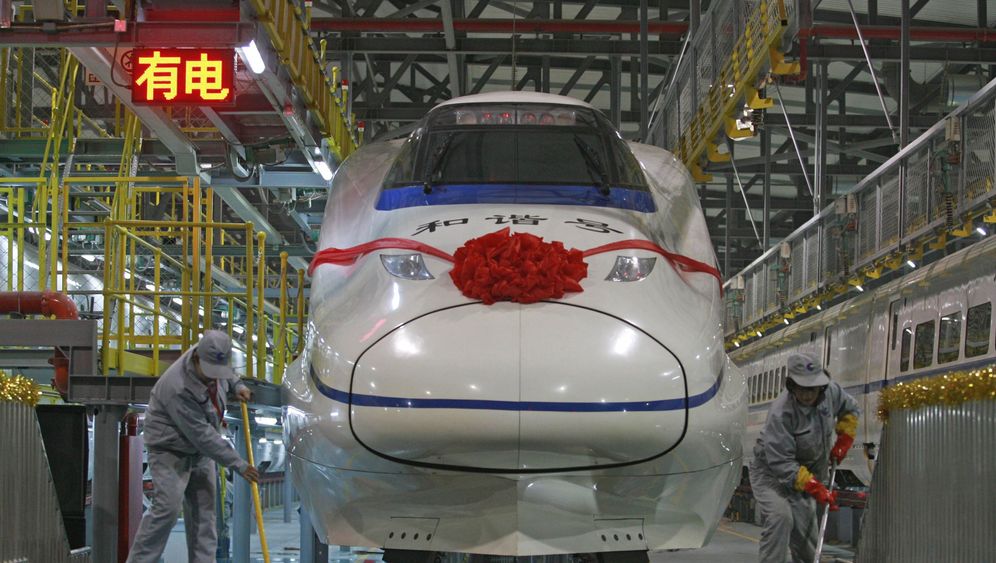 With their elegant, white-and-blue exteriors, the super-high-speed trains lined up on the factory floor glitter like a school of barracudas. The opened front panels of the locomotives gape like hungry jaws as technicians in beige uniforms tend to what's inside.

Deputy chief engineer Lu Renyuan, 48, smiles proudly. These newly assembled bullet trains will soon leave the China South Locomotive & Rolling Stock (CSR) factory here in the northeastern Chinese city of Qingdao to race along new high-speed tracks at speeds of up to 350 kph (217 mph) -- in other words, faster than any other train line in the world. Similar trains already race back and forth between such major cities as Wuhan and Guangzhou, shortening the travel time between them from 11 hours to three.

These trains and their railways are only one step along the way in China's ongoing and ambitious race to catch up with its competitors. By focusing on incorporating foreign rail technology since 2004, the country has grown to become the most serious competitor to companies -- such as the German engineering giant Siemens -- that used to run laps around it when it came to such technologies.

At the moment, Western companies are still proudly showcasing their technology at the 2010 World Expo that just opened in Shanghai. They're still hoping for more contracts worth billions. And, as Siemens did at the expo's opening, they're still giving polite public thanks for being considered "an integral part of the Chinese economy."

Even so, CSR is simultaneously busy at work developing its own trains that can travel 380 kph (236 mph). The plan is for these new super-speedy trains to shorten the 1,300-kilometer (800-mile) stretch between Beijing and Shanghai from roughly 10 to just four hours by 2011.

More than anything, the expansion of China's railway network has taught its competitors a lot about its sophistication and desire to expand. The one-time client has now become a competitor. And this is no where more evident that in the railway sector.

The new challenger to Germany's ICE, France's TGV and Japan's Shinkansen is called "Hexie." The word means "harmony" -- in a respectful bow toward President Hu Jintao and his constantly evoked idea of fostering a "harmonious society."

Beijing wants to use its new high-speed trains to bring the various parts of China's vast territory closer together. By 2020, its new rail network is set to increase in size from around 6,500 kilometers (4,000 miles) to 18,000 kilometers (11,000 miles). A web of high-speed train lines will connect the most important cities -- from north to south and east to west. In a later phase, planners even want to expand on a global scale, toward Southeast Asia and the West, even as far as London. And, of course, they want to use Chinese high-speed train technology in the process.

Until only recently, if you had told Western experts that China would evolve into a global technology leader, they most likely would have laughed. But now it's the Chinese who are laughing. Whether in Venezuela, Malaysia or Indonesia, their homeland has started aggressively bringing its own high-speed trains onto the export market. And, in doing so, it ruthlessly exploits the cutting-edge technology so recently imported into the country from the West.

In the US, for example, China hopes to win billions in contracts to help President Barack Obama upgrade his country's run-down rail network as part of his economic stimulus package. And, in Saudi Arabia, Siemens recently declined to go up against Chinese companies manufacturing much less expensive railways. Instead, the Munich-based company will merely bid on the high-speed line planned between Mecca and Medina as part of a Chinese-led consortium.

Lu, the engineer, casts a sweeping glance across the factory work floor. Screws are neatly and carefully sorted by size in colorful plastic boxes, and not a speck of dust mars the perfect shine of the gray floors. Here in Lu's factory, everything has to be perfect -- because there's much more at stake for China than just high-speed trains.

Indeed, in a national tour de force, planners in the Communist Party and the Ministry of Railways have succeeded in doing what they also hope to achieve over the long term with automobiles, airplanes and other high-tech industries. When it comes to rail technologies, the plan was simple: By using both the political bait of forming joint ventures and deft negotiating tactics, China attracted leading Western engineering companies to China -- such as Siemens from Germany, Alstom from France, Bombardier from Canada and Kawasaki from Japan. Once it had these foreign companies where it wanted them, it played them off against each other so that they would relinquish key pieces of technological know-how at a low price.

The exteriors of the Chinese trains easily betray their genetic heritage. The trains here in Qingdao, for example, bear a striking resemblance to Japan's Shinkansen trains. In Tangshan, a few hundred kilometers further northwest, a competitor called China Northern Rail got most of its technology from Siemens --and you can hardly tell the difference between its Hexie trains and Germany's ICEs.

Still, Lu insists that the bodies of the Hexie trains as well as their contact-line and signaling systems are all Chinese intellectual property. "For a long time," he says, "we have stood at the forefront of global high-speed technology."

Likewise, there are claims that it won't be long before the trains' external appearances bear hardly any resemblance to the ones that have been imported from abroad. For example, the trains on the high-speed line currently under construction between Beijing and Shanghai will reportedly have a very unique Chinese design.

Railway engineers in China are proud to point out that they have developed more than 940 of their own patents. Officials from the Beijing-based Ministry of Railways closely monitor train manufacturers to make sure that they share the knowledge they've acquired from other countries amongst each other and continue to jointly develop that know-how. Collaborative efforts like these take place, for example, in the modern research center located in the middle of Qingdao's massive 1.3-square-kilometer (0.5-square-mile) railway factory complex that is directly supervised by the government.

"Zizhu chuangxin," or "independent innovation," is the Chinese catchphrase for their system of further developing foreign technologies. When he wants to demonstrate the meaning of the concept, Lu leads visitors to the part of the factory work floor where axles are being assembled and points out their spotlessly clean steel wheels. With each increase in traveling speed, Lu explains, it's also necessary to reinforce the material with carbon -- thus creating a completely unique product.

The work floor is currently being expanded. In late 2009, the Qingdao factory was producing 120 high-speed trains each year. By June of this year, the factory hopes to boost that number to 200. To make this goal a reality, Lu and his co-workers almost labor around the clock. Indeed, Lu says he hardly has any time for his family, but that his wife can't complain because she works here in the Qingdao factory, too.

People working in China's railway industry almost behave as if they were part of one big family, as can be seen, for example, in the way they urge each other on in their joint attempt to outdo their Western competitors. As Lu sees it, this patriotic incentive is precisely what distinguishes his country from Germany. Having taken several extensive tours of German train factories, Lu has concluded that: "Deutsche Bahn thinks first and foremost about Deutsche Bahn, and Siemens first and foremost about Siemens." "But, in China," he adds, "each person thinks about how we can all advance our nation together."

Zhao Xiaogang views things in very much the same way. The 59-year-old general manager of CSR receives visitors at the company's new headquarters in Beijing. A lanky man, he doesn't look like the head of the country's largest manufacturer of locomotives and railway cars. But, during the first quarter of 2010 alone, he has succeeded in boosting the company's net earnings by the equivalent of €39 million ($51 million) -- or 85 percent more than the company earned in the same period of 2009.

Since the outbreak of the global financial crisis, China's train manufacturers have been working with even more of a tailwind. As part of its efforts to further spur on the economic boom, Beijing plans to invest around €78 billion each year between now and 2012 toward expanding its railway network. Granted, high-speed trains on several routes, such as the one connecting Beijing and Tianjin, are operating at a considerable financial loss. But that's doesn't concern Zhao -- because that's where the government steps in.

A Need for Speed

Zhao, who has a degree in engineering, is driven by the ambition to keep setting new records with his trains. He becomes unexpectedly animated when he starts to discuss the noise levels in all classes of trains. China strictly adheres to European noise restrictions, he says, but his trains can travel 350 kph -- instead of 270 kph -- while maintaining a higher standard of comfort. "When I rode the Eurostar," Zhao recounts, "it shook so much I had to hold onto my seat." In China's newly developed trains, he says by way of comparison, he can walk around comfortably even at 350 kph.

Still, though its trains might be breaking records for speed, China is still assuming higher levels of risks than its foreign competitors. "Ensuring continued safety remains China's greatest challenge," says Sun Zhang, a transportation expert at Shanghai's Tongji University. Indeed, the country's Japanese competitors -- who have run the world's safest high-speed train network for 46 years -- go so far as to accuse China of risking lives in its manic pursuit of speed.

Zhao's engineers are already testing an even faster Hexie train -- a lightning-quick model capable of traveling 550 kph -- at the state-run railway laboratory in Qingdao. In October, the company hopes to set its next world record -- 600 kph. No one has ever flown so low.