SPIEGEL: Mr. Miron, why should heroin, cocaine and marijuana be legal?

Miron: The prohibition of drugs is the worst solution for preventing abuse. Firstly, it brings about a black market that is corrupt and costs human lives. Secondly, it constrains people who wouldn't abuse drugs. Thirdly, prohibiting drugs is expensive.

Miron: If it legalized drugs, the United States could save $85 billion to $90 billion per year. Roughly half that is spent on the current drugs policy and half that is lost in taxes that the state could have levied on legal drugs.

SPIEGEL: On the other side of the equation, there are many people who would become addicted to drugs.

Miron: Let us assume that the consumption of drugs would increase as a result of legalization. Would that be a bad thing? If we apply the standards of economics, that is (at least partially) a good thing. Any policy that prevents me from doing what I'd like to do impairs my happiness.

SPIEGEL: Should the state treat sports and cocaine equally?

Miron: The effects of cocaine are described in a highly exaggerated way. There are Wall Street bankers who snort coke; they have high incomes, access to a good healthcare system, are married and have a stable life situation. Many of them subsequently stop taking cocaine. I get the impression that these people enjoy consuming it. Then there are people who smoke crack cocaine and lead lives that are very different from those of stockbrokers; they are people with low incomes, no jobs and poor health. Many of these people come to a sorry end. But cocaine's not to blame for that. Those people's lousy lives are to blame.

SPIEGEL: Are you trying to say that crack is harmless?

Miron: Can you consume crack for a long time and then give it up? Absolutely, and that's supported by the data. The prohibition lobby exaggerates substantially to help it achieve its goals. Drugs are far less dangerous than people think. It's not clear that consuming marijuana or cocaine has significant negative effects if the product is affordable, if we don't have to risk our lives to get it, and if the product hasn't been diluted secretly with rat poison.

SPIEGEL: Are you trying to say it's not dangerous to shoot heroin?

Miron: Injecting it is so widespread because, under prohibition, heroin is expensive and injecting makes users high for less money. If drugs were much less expensive, most people would probably smoke heroin rather than injecting it.

SPIEGEL: One more time: do you think it would be good if legalization led to an increased consumption of drugs?

Miron: If you believe in anything that the Americans claim to believe in -- freedom, individuality, personal responsibility -- you have to legalize drugs. The maxim should be that you're allowed to do it if you're not harming anyone else. There is an assumption that you're harming someone when you take drugs, but the scientific data doesn't support this hypothesis.

Miron: The scientific evidence for that is very thin. Most of the evidence that points to a connection between violence and drugs relates to alcohol. Does that mean that alcohol should be banned? In fact, the legalization of all drugs would sharply reduce the amount of violence in the US.

Miron: Prohibition leads to violence. By making a black market inevitable, you generate violence because the conflicts between the parties involved in the drug trade can't be solved by legal means within the judicial system. They are forced into a twilight world in which they have to shoot each other instead of hiring lawyers and taking the matter to court.

SPIEGEL: So the state should just let the cartels get on with it?

Miron: There are studies that show the level of violence is reduced when the state leaves the drug trade alone, the reason being that the drug dealers have fewer disputes. The latest evidence from Mexico confirms that. Of course there has been drug-related violence there for a long time. But the violence didn't escalate and increase sharply in scale until the president, Felipe Calderón, declared the big war on drugs in 2006. We have calculated that the murder rate in the US could fall by around 25 percent if drugs were legal.

SPIEGEL: How would drug prices change as a result of legalization?

Miron: Marijuana prices would hardly change. If we compare the black-market prices with prices in places where marijuana is virtually legal today, for example the Netherlands, they are very similar. The prices paid for cocaine could fall substantially.

SPIEGEL: Then the whole country would snort coke.

Miron: Consumption of the more harmless drugs would probably increase. And there would be a larger number of people who occasionally take a drug. But when single malt whiskey became legal again after the prohibition of alcohol in the US ended, the whole country didn't become addicted to single malt.

SPIEGEL: Don't we as a democracy have an obligation to protect the people from themselves?

Miron: I think that people who harm themselves with drugs will do it anyway, regardless of whether or not they're legal.

SPIEGEL: Don't we have a moral obligation?

Miron: If a friend of yours does something that's stupid, do you think about whether it would make the situation better or worse if you intervened? Maybe putting your friend in prison and forcing him to undergo therapy isn't the best solution. Maybe it's better to talk to your friend in a calm and collected way.

SPIEGEL: Is talking the solution to the drug problem?

SPIEGEL: Why are drugs prohibited at all?

Miron: Naive people believe that if something's illegal, people won't do it any more. That clearly isn't true. Others think that if you make it illegal, the price will rise and fewer people will take the drug. But for some people the price isn't a factor.

SPIEGEL: What would a world in which drugs were legal be like?

Miron: Like Portugal. There, consumption has been legal for several years and there has been hardly any change in the amount of drug use. Legalization wouldn't greatly increase the rates of use. And if people started to smoke more marijuana, that would be okay too. It's their business.

SPIEGEL: Do you seriously want drugs to be sold in supermarkets?

SPIEGEL: Would prescribing the drugs be a possibility?

Miron: A very lax prescription law like the one in California doesn't do any harm, because everyone gets a prescription. But if that's the case, what good does it do? If you have a very strict prescription law, you'll have a black market again.

SPIEGEL: What would happen to the black market if drugs were legalized?

Miron: You'd have the choice. You could buy your cocaine in a supermarket or from a mysterious Mexican dealer at a street corner who might shoot you. That would drain the black market.

SPIEGEL: What would happen to the drug cartels?

Miron: If drugs were legalized, many of the big cartels in Mexico would try to use the benefits of their experience by setting up a legal company right away. They'd want to be the first and they've got good products and a good distribution network. It's still highly uncertain whether the drug cartels want legalization. El Chapo Guzmán, the most powerful cartel boss in the world, has a natural advantage because he's a very skilled criminal -- that's why he's so rich. If there was no longer a black market for drugs, Guzmán would lose his advantage.

SPIEGEL: Should drugs be taxed?

Miron: A substantial tax is a bad idea because it would increase the incentive to set up a black market again.

SPIEGEL: Why isn't anyone putting your suggestions into practice?

Miron: Many thousands of people working in government posts would lose their jobs as a result of legalization. The rehab centers would lose a lot of customers because many of the people in rehab were forced to go there by the judicial system. The people who build prisons also have an interest in there being large numbers of inmates. In addition to that, the church doesn't like drugs and the church is powerful in America.

SPIEGEL: Do you take drugs yourself?

Miron: No. I smoked a bit of pot when I was a student, but that was all. But if drugs were legal tomorrow, I'd go out and give them all a try. I doubt I would use them more than once; but after all the research I have done on this issue, I am curious! 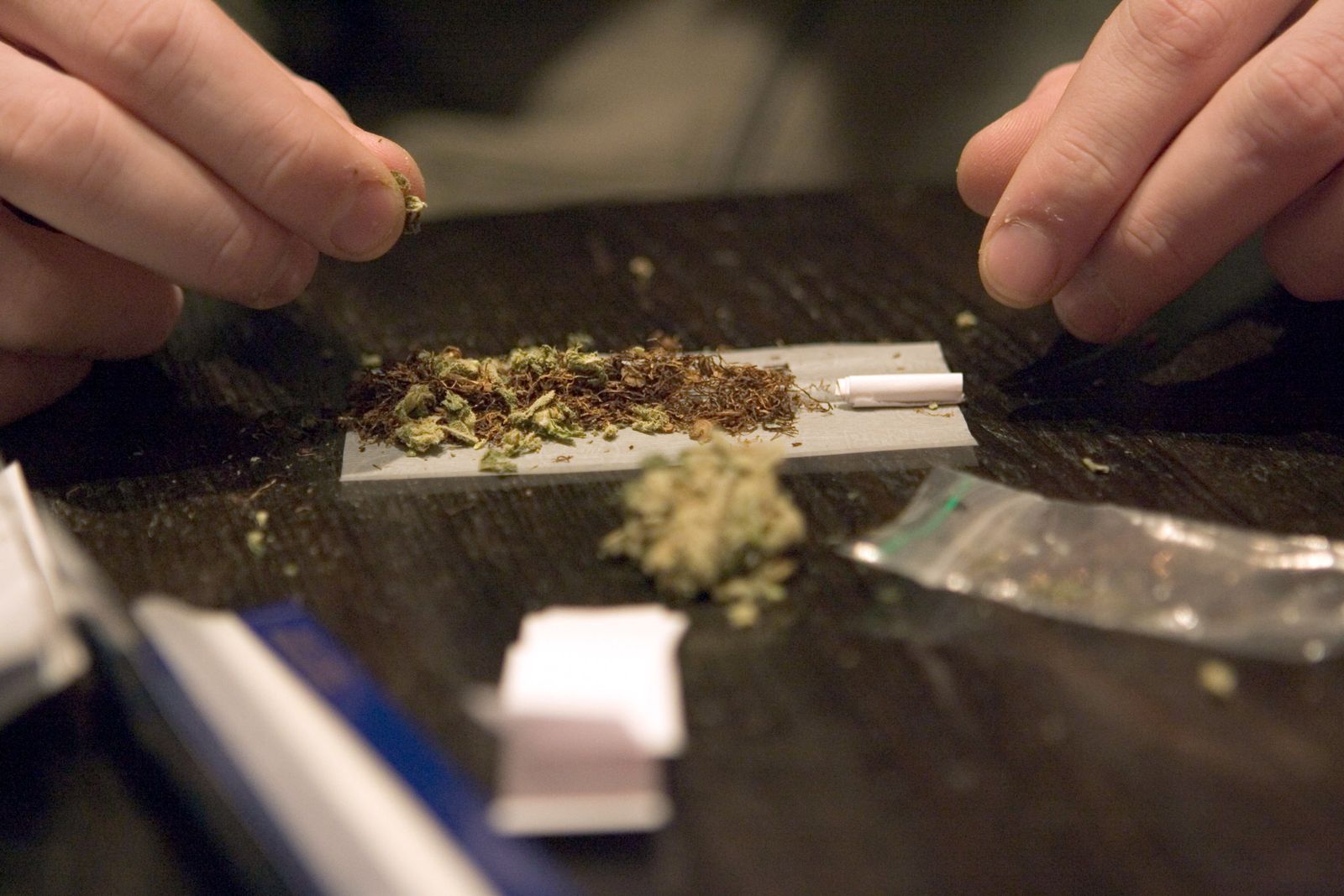 Jeffrey Miron believes that the effects of drug use are grossly exaggerated.