A young man named Hussam, a 26-year-old with a Kalashnikov slung over his shoulder, controls access to liberated Libya. Passports? What for? Hussam is more interested in finding out how someone entering the country feels about this enormously important event in his life. "What do you think about our revolution?" he asks.

Hussam volunteered to stand guard in the border town of Umm Saad after the colonel's border guards had disappeared. The border post used to be called Forte Capuzzo back when Libya was an Italian colony. General Erwin Rommel's tanks passed through the area on their way to El-Alamein.

And now Hussam is standing in the very same spot, on Friday of last week. He is a Bedouin from the Aulad Ali tribe, which has never had much respect for borders. "Tobruk is secure, Al-Bayda is secure and Benghazi is almost secure. Another five days and Gadhafi will be finished," he says, seemingly surprised at what he has just said.

The first thing they did was to replace the flags. Now the old royal flag hangs over Forte Capuzzo, red, black and green stripes with a white crescent and star in the middle. The words "Welcome to the Land of the 2011 Youth Revolution," in blue and white, are sprayed onto the wall in front of the border crossing.

An exodus is unfolding on the other side. For days, Egyptians, Turks and Jordanians have been passing through the checkpoint, loaded down with blankets and mattresses, shovels, power tools and wheelbarrows, as if they had just left a construction site to flee to Egypt. One man is dragging a metal box across the asphalt in no man's land, while others are clinging to the bed of a Toyota pickup truck. Those who still have the strength to do so are waving and cheering and shouting with relief, happy to have escaped the danger.

These construction workers, harvest workers and teachers can still hear the appeal broadcast on Libyan state television to kill every foreign troublemaker. "We are fair game," says one man who wants to finally return to his village in Upper Egypt.

The area they are all coming from, the coastal region between here and Benghazi, is almost completely under rebel control. A new Libya is already taking shape there.

Libyan leader Moammar Gadhafi governed his realm through so-called Basic People's Congresses, pseudo-democratic bodies in which the will of the revolutionary leader was implemented. Now other people's committees have formed in Benghazi, Tobruk and Misratah, councils of lawyers, teachers and engineers who are providing a rudimentary form of government.

Looking after the World's Press

Hassan is also part of the new power structure, in Tobruk, a two-hour drive west of the border with Egypt. He is only one of many, he says, peering out from behind thick glasses. With a group of young men, most of them carrying pistols under their T-shirts, the 52-year-old strides through the Masira Hotel, which has been repurposed to serve as the local rebel headquarters. Hassan says that he runs the revolutionary committee in this port city. The 15-member group meets in one of the conference rooms every evening. The flat-screen TV is tuned to Al-Jazeera, while reports from other cities in the "liberated zone" are coming in via mobile phone.

The committee still lacks a political road map, but it is looking after the world press as it floods into Tobruk with astonishing professionalism. Large buses soon arrive to transport the journalists to the scenes of clashes along the Mediterranean coast. "The world has to realize what is going on here," says Hassan.

Others, like Ashraf Abdullah, are more interested in taking the revolt all the way to Tripoli. The 25-year-old is standing in front of the gate of the Nasr military base near Tobruk. An old Russian fighter jet can be seen in the background. He is carrying an almost unused Kalashnikov with a bayonet attached to it. The gun is from the armory at the base, where Abdullah and his cohorts have stocked up on weapons and radios.

The 500 soldiers on the base switched sides when the protests began, he says. "We let them go home. They are good men, because they did not obey the command to shoot us." According to Abdullah, the seven remaining fighter jets took off for Tripoli shortly before the rebels arrived.

On this evening, the former members of Gadhafi's military have called an improvised press conference in the lobby of the Masira Hotel. The ranking general in Tobruk and a few of his officers are there. Surrounded by the new powers that be, they are choosing their words carefully. The officers report that there has been resistance to Gadhafi in the army for some time, and that they would never have accepted an order to shoot protesters. The officers insist that it is now time to join forces with the rebels in fighting the despot, even if it means becoming a martyr.

'Hospital of the February Dead'

It is 220 kilometers (137 miles) from Tobruk to Al-Bayda. The transition of power did not go off as smoothly in Al-Bayda. The evidence of what was apparently a fierce battle covers the white tile floor in the regional airport terminal: shell casings, combat boots and first-aid supplies. There are also weapons crates and blood-spattered uniforms lying around, which belonged to African soldiers sent to quell the uprising among the residents of Al-Bayda. The windowpanes were shot to pieces.

Local residents say that the regime brought in about 400 soldiers from Chad, Sudan and Uganda on Russian Ilyushin aircraft three times last week, and that tanks were flown in from Tripoli. One of the tanks, now burned out, stands in front of the devastated airport.

Armed with sticks and metal bars, the rebels tried to stop the soldiers from marching into the town, says a young man from a nearby village. He filmed it all with a small camera, he adds.

Now they are lying side by side in beds in the hospital in Al-Bayda, the victims and the perpetrators in this revolution, with shattered faces and bullets in their stomachs. The hospital is now informally referred to as the "Hospital of the February Dead."

Issa Gobaili, 45, is in a room on the second floor. He is a portly, jovial man, the father of 10 children. There are tubes emerging from his abdomen, where Gadhafi's mercenaries shot out half his stomach and a kidney. Gobaili was at the airport with many others. They tried to talk to the strangers, but the foreign troops couldn't understand them, "not a word," he says. Eventually a scuffle erupted, and then the black soldiers began to shoot.

"Gadhafi is no longer one of us," says Gobaili, lying in his hospital bed. "He has foreign mercenaries shoot at his own people. He no longer has a people." Gobaili's 10th child, a boy, was born a day before the battle. He named the child Jihad, which simply means "struggle."

But the Libyan soldiers also fought, mainly to protect the barracks. Snipers fired at protesters. A bullet hit Adris Sulaiman in the neck. It reemerged from his cheek, ripping off half of his nose in the process. An agricultural engineer by trade, Sulaiman has a gray beard and doesn't look like a revolutionary. But now he says things like: "Freedom is more important than my life."

'I Am Not an Islamist'

One of the wounded soldiers is Abdul-Karim Ali. He is only 17 and used to be in school. But then, he says, the so-called Khamis Brigade, the militia run by Gadhafi's son Khamis, forced him into service. The soldier lying to his right is shaking. He had to be tied down earlier. To Ali's left is a man who is staring blankly at the ceiling. "All of his bones are broken and he was shot in the head. We don't know what happened to him," says the doctor, Imili al-Hilali.

The leader of the Al-Bayda rebels is in a room on the ground floor of the hospital, but only because he has had trouble with his blood pressure in recent days and needs treatment. Mohammed al-Darnawi looks exhausted. He is 57, and his beard is almost completely white. He was the principal of the girls' school in Al-Bayda before the revolution. Now he is the head of the entire region and apparently so important that the government media are disparaging him as a member of al-Qaida. "They're doing that so that the West will be afraid of us," says Darnawi. "I am a Muslim. I am not an Islamist or a terrorist. I'm a teacher. This revolution is coming from us, not the Islamists."

Individual gunshots can be heard outside the hospital from time to time. They are shots of joy, says the doctor.

No Danger to Other Countries

Governing has become complicated in the rebel-held part of Libya. Meetings are now being held constantly, some of them involving hundreds of people, says Darnawi. People are being appointed by acclamation to handle various tasks or stand guard on specific streets.

The tribal structures have maintained order so far, applying the traditional system of giving and taking, regulated by Bedouin tribal law. But no one knows how the tribes will be able to work together once Gadhafi has been ousted. It is also unclear which structures are supposed to replace Gadhafi's system. Unlike Tunisia and Egypt, there are no trade unions or political parties in Libya.

Rebel leader Darnawi also doesn't know where the revolution could be headed, what Libya will look like in a few months' time and whether anarchy is only a temporary state of affairs. But one thing, he says, is clear: "We rebels will not pose a danger to other countries." 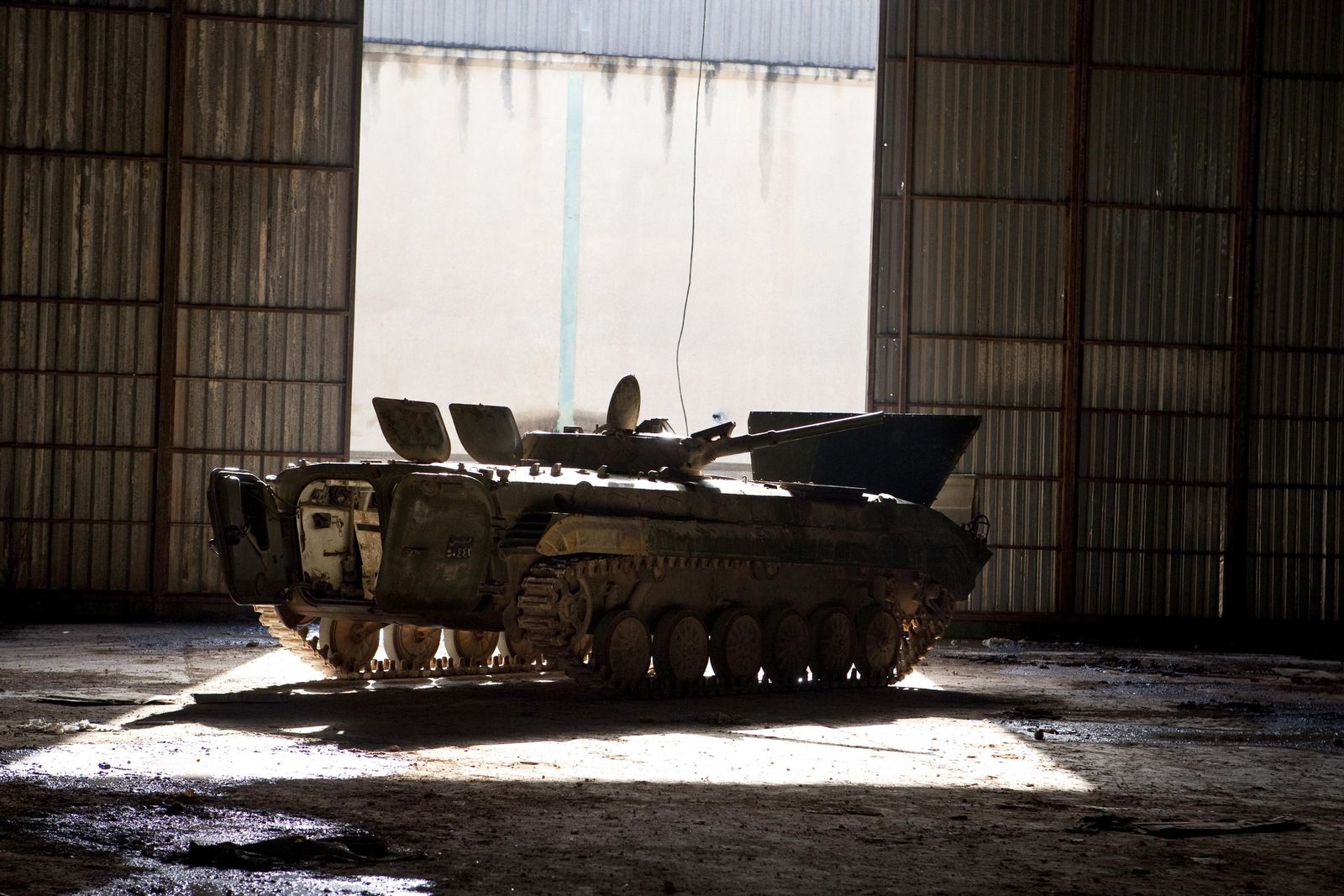 A burnt-out tank belonging to Gadhafi's security forces lies abandoned in a hangar near Al-Bayda on Sunday.