A special investigative committee of German parliament hasn't even started its work in addressing allegations of US spying against Germany, but Marcel Rosenbach and Holger Stark are already wrapping up their own work on the matter. The SPIEGEL journalists, who appear to have had access to the documents in Edward Snowden's archive, provide a comprehensive and detailed account of the former NSA worker as well as background about his asylum in Russia in their newly published book "The NSA Complex," which came out in German this week.

In the book, they quote from encrypted chats with Snowden, they report on visits to NSA headquarters in Fort Meade, to the Chancellery in Berlin and to the White House, and on interviews conducted with both current and former intelligence service workers around the world. The book even quotes a former head of the East German secret police, the Stasi. The tome contains a trove of information from Snowden's documents -- for example on the joint tapping of data from fiber-optic cables by Britain's GCHQ intelligence service and the National Security Agency in the United States. There's not much by way of spectacular new information -- the invaluable service here is the authors' ability to see the forest through the trees and provide greater context about what we have learned so far.

The "NSA Complex" depicts Snowden as the archetype of a new hero for a new generation, one whose arguments and thoughts have a whiff of radical morality to them. And the book does indeed provide thoroughly interesting details about the life of the 30-year-old autodidact, but it is also permeated with a seeming admiration for the subject that is quite atypical of SPIEGEL reporting. It's not just the gushing tone that irritates at times with this book, but also the attempt to elevate the whistleblower to the level of some nascent digital, social movement. Snowden is stylized to the point of becoming an allegory for a generational conflict: Politics 1.0 versus Politics 2.0, the meeting of two worlds that are only semi-compatible with one another.

Exaggerated Fears of a Surveillance Society

Through this newly sculpted hero, the authors paint a gloomy picture of an NSA and GCHQ that have become a global surveillance apparatus that people can no longer escape. The book makes overly clear the authors' fears of a surveillance society in which, thanks to "Big Data" analysis, intelligence agencies can access every bit of knowledge about people, including their thoughts -- even before they have had a chance to become cognitive reality. It's the fear of a "Brave New World" à la Aldous Huxley or of some North Korea 2.0.

Rosenbach and Stark describe this new world in a chapter titled, "We, the Monitored." Perhaps they're just suffering a typical case of German angst? And perhaps the title of the book says it all: This fear of being surveilled by the NSA could in itself be an NSA complex in the true psychological sense. Why else might it be that Snowden isn't attracting nearly the attention in other countries that he is paid in Germany? Why hasn't the NSA become an issue on a similar scale in France, Spain, Italy, Russia, China or Japan? These are all countries and people who also must have been affected by the Snowden documents.

Perhaps these fears are the product of two misconceptions. One is the misconception that the mere capture of data automatically means that people's behavior or actions are being monitored. The other is the assumption that dominated the public discussion here in Germany last autumn -- that if the NSA has no qualms about eavesdropping on the German chancellor, then normal German people also have to assume that they are being watched.

We already know that the United States and other countries have a different conception of data privacy protection than we do and that the law is unconcerned with the mere capture and storage of personal data. But does the saving of data automatically equate to surveillance? Why would the US be expected to read the emails of Germans and listen to their conversations? If I correctly understood the public opinion polls taken around the time of the German federal elections last September, then most Germans do not share these concerns. They do not believe that some sinister authority is interested in their personal emails and telephone conversations. What they actually believe is that they are being protected from the threat of terrorist attacks. The book itself reminds us that the plans of the so-called Sauerland Group of would-be terrorists to attack American targets in Germany were foiled with the help of a tip-off from foreign intelligence.

I am convinced that even an intelligence service like the NSA would be overwhelmed if it were to have to intercept and read Germany's entire telecommunications traffic. It would likely have to hire hundreds of thousands of employees to handle that massive task alone.

All the same, we cannot down-play the mass capture of German data by foreign intelligence services nor the eavesdropping on political decisionmakers in Germany. It would also be a mistake to narrow the conversation to just the NSA and GCHQ. Other countries exist that possibly possess similar capabilities who are not our friends.

Taking this into account, Rosenbach and Stark present possible approaches for addressing the issue, starting with ways for those affected to protect their own data and telecommunications and leading up to what states can do to protect themselves and their citizens.

Criticism of our friends in Washington and London won't help to improve the situation. Instead we need to get our own houses in order. Being sloppy with your data is like leaving the front door open -- it's not just your friends who will be coming in and out of your homes, but also uninvited guests. There's no point in cursing at the thief or flogging the guard dog, especially if you kept it on a leash and muzzled at the time of the crime.

The answer to the issue can only be better education and improved protection -- in terms of the legal, the tangible and our own intelligence capabilities. Information security is a part of national sovereignty as is the fundamentally protected privacy of the individual. Cyber security and networked security are one and the same.

The effect of the Snowden disclosures has been that the public has had a one-sided view of the activities of the US and Britain. There has been little reporting about similar behavior on the part of other countries. Nevertheless, there have also been positive aspects to the reporting, at least indirectly. The public debate over the NSA revelations has increased awareness of a number of problems relating to the vulnerability of the digital world to spying attempts -- from the unhesitating use of smart phones to an elementary threat to critical infrastructure.

Marcel Rosenbach and Holger Stark have produced a fact-filled, important and passionately written book that is compelling and draws in its readers. Of course they have their own view about Snowden and the NSA. You don't necessarily have to buy into their analysis, but it ought to be taken seriously and also lead us to review our own arguments on the basis of it.

Hans-Georg Maassen, 51, is the president of the Federal Office for the Protection of the Constitution, Germany's domestic intelligence agency. In addition to monitoring extremists threats, his office is also responsible for the country's counterintelligence efforts.

You can read an article based on the SPIEGEL book, "The NSA Complex: Edward Snowden and the Path to Total Surveillance," here. The book was published this week in German by DVA, a subsidiary of Random House. You can read the English-language archive of SPIEGEL's reporting on the NSA scandal here. 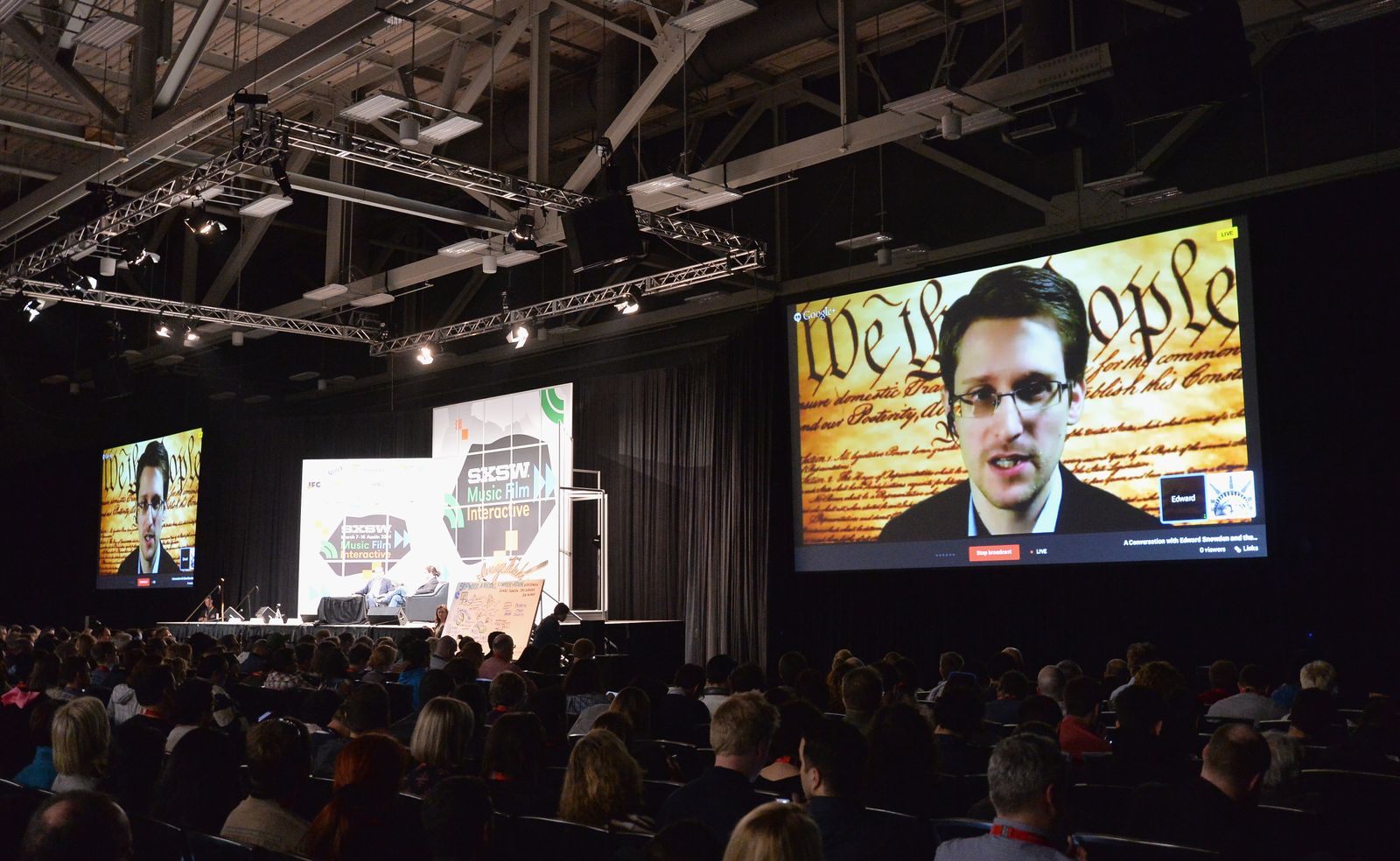 NSA whistleblower Edward Snowden speaks via video conference at the South by Southwest Festival in Austin, Texas, in early March.