SPIEGEL ONLINE: Admiral Nimmich, is the United States winning the war on drugs?

Joseph Nimmich: The cartels get more sophisticated. We get more sophisticated. If winning is: have we eliminated drug flow? No, we are not winning. If winning is: are we continuing to ... convince people that they shouldn't be using drugs, in the United States? Yes, we are. Demand for cocaine across the board has gone down over the last few years.

SPIEGEL ONLINE: You head the Joint Interagency Task Force, a joint operation between the US Navy, Coast Guard, CIA, and numerous other agencies. For 19 years the force has been combating the illicit flow of narcotics, primarily cocaine from South America. What has changed in that time?

Nimmich: We have seen the dramatic globalization of the drug flow. More and more of the drugs are flowing through West Africa into Europe, and there's also a flow towards Asia. The narco-traffickers are probably one of the largest asymmetric threats that we face today in terms of national security. With their ability to move drugs comes the ability to move money, the ability to move weapons, the ability to move terrorists, weapons of mass destruction. The drug cartels are constantly adapting -- which creates things like the semi-submersibles that we are facing today.

SPIEGEL ONLINE: These are boats that do not completely submerge like a submarine. How long have the drug cartels been using them?

Nimmich: There's been rumors in intelligence for almost 10 years. It was in November of 2006 that we interdicted the first semi-submersible  since then, we have interdicted quite a few more.

SPIEGEL ONLINE: Do you think the cartels will be making increased use of them?

Nimmich: In 2006 we became more effective against the fishing vessel threat, one of their primary conveyances of large quantities of cocaine. As we got better against that, they refined the semi-submersibles. We talk in terms of three generations of semi-submersibles. The new ones have steel construction, two engines, larger capability, more fuel, and greater distance capability. They can go longer distances by themselves. Between 3,000 and 3,500 miles (4,800 and 5,000 kilometers).

SPIEGEL ONLINE: How many semi-submersibles are they using at the moment?

Nimmich: Probably in the 70 to 80 range. We don't think that it is going to be dramatically higher. Otherwise they would exceed the amount of cocaine that moves.

SPIEGEL ONLINE: What kind of challenges do these types of vessels pose? 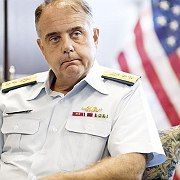 Nimmich: It takes a great deal of effort to be able to identify them, and they are easily done away with once we come on scene. Their orders are to not let the cocaine be intercepted.

SPIEGEL ONLINE: So how do you detect them?

Nimmich: We try to track where they come from. There are three or four areas along West Colombia where they tend to be built.

SPIEGEL ONLINE: Where exactly? Are they built at shipyards?

Nimmich: No. They are built in the jungles up on the river systems.

SPIEGEL ONLINE: How do they get all the materials they need to build them there?

Nimmich: They put it on boats and barges and move it in a little at a time. It's all done by water. They don't truck it in. The tough part is how do you get a big diesel engine out into the jungle. That's part of the uniqueness: how do they move these things without anybody realizing it?

SPIEGEL ONLINE: And how do they?

SPIEGEL ONLINE: Who builds the boats? Are they naval architects? Military experts?

Nimmich: No. Just people who know how to design boats. They could be recreational boat designers. Individuals with nautical technologies go down and help design them. Once the designs are made and the builders have some experience, they no longer need the advice.

SPIEGEL ONLINE: Mexican President Felipe Calderon is trying to crack down on drug smuggling. How is this affecting the drug cartels and the semi-submersibles traffic?

Nimmich: What it means is that instead of going off of Mexico, they're probably stopping short of that. They're going into Honduras, Guatemala, and then taking it over land.

SPIEGEL ONLINE: How does the cocaine get into the United States?

SPIEGEL ONLINE: How is the consumption of cocaine in Europe developing?

Nimmich: It's only in the last half-a-decade or so that the real flow has moved toward Europe, and there are more and more indications of consumption. If I look at countries in Central America and say they are subject to corruption, the government and the judicial systems aren't adequate to deal with the problem and they don't have enough resources to control their own borders, they are light years ahead of West Africa. So think about if you're a drug mover -- basically you can do whatever you want and you have got the entire Mediterranean to bring it across. It becomes a far more appealing environment.