It has been a bone of contention between Germany and its allies for months. Berlin had been resisting pressure from the US, Israel and other European Union countries to shut down a Hamburg-based Iranian bank that is considered a financial lifeline for Tehran's nuclear program -- until now.

According to information obtained by the German daily Süddeutsche Zeitung, the German government has now decided to drop its opposition to putting the European-Iranian Trade Bank (EIHB) on an EU black list during an upcoming review of EU sanctions against Iran.

A German Foreign Ministry spokesman would not confirm the step, saying only that the bank was subject to "strict controls." Should there be evidence that the bank was engaged in behavior that fell within the scope of sanctions, "that would naturally have an impact on the ongoing sanctions review," he said.

In its report Friday, the Süddeutsche quoted sources in government circles as saying that "if evidence continues to accumulate, the conditions for a listing (on the EU black list) will soon be fulfilled." The newspaper said that internally, however, the German government had already made the decision to put the EIHB on the black list.

In recent months, US and European Union officials have stepped up pressure on Germany to close down the EIHB. In February, 11 US senators sent a letter to German Foreign Minister Guido Westerwelle urging immediate action. Israeli Prime Minister Benjamin Netanyahu also raised the issue with Chancellor Angela Merkel during their meeting in Berlin last week. The Wall Street Journal reported this week that Germany had also rejected a French proposal to blacklist the EIHB in February.

The US considers the bank to be an important financial conduit for Iranian companies involved in Iran's nuclear and missile programs. Last year, the US Treasury placed the EIHB on its black list of institutions banned from the US financial system.

Until recently, the German government had refused to include the bank on the EU's black list, claiming that there was not enough proof of the bank's engaging in sanction-worthy behavior. Berlin argued that the case would not stand up in court if the EIHB took legal action against being added to the black list.

But according to the Süddeutsche report, the British government, which had already applied in Brussels to get the bank put on the black list, apparently has enough evidence to justify sanctions, should the bank appeal to the European Court of Justice. A British delegation presented the proof to the German government in March and apparently managed to convince Berlin that the step was justified.

Germany's Foreign Ministry had also sent a high-ranking official to Washington to view incriminating evidence in the possession of the US government. In the light of the growing evidence of the bank's illegitimate activities, it became increasingly hard for the German government to stick to its position, the Süddeutsche reported.

Berlin has also faced pressure over the EIHB's role in a controversial oil deal between India and Iran. India, which imports some $12 billion (€8.3 billion) worth of oil from Iran each year, had been looking for an alternative channel to process transactions with Tehran, after the US forced it to break off direct business relations with the country. Delhi found a solution in the form of the EIHB and planned to process a multi-billion payment for Iranian oil via the Hamburg-based bank. The German central bank, the Bundesbank, would provide support in processing the transaction.

The deal was apparently made in connection with the release of two reporters from the German newspaper Bild am Sonntag from Iranian detention in February. German government sources recently told SPIEGEL ONLINE that Berlin approved the Bundesbank's help in the Iranian-Indian transaction in exchange for the release of the two prisoners.

Washington pressured Berlin to stop the payment, arguing that Tehran channels revenue from oil sales into its nuclear program. In the meantime, India has decided not to process the payment via Germany in response to a request from Berlin.

Observers believe that German reluctance to support sanctions against the EIHB had to do with the importance of Iranian business deals for the German economy, especially for the country's famous small and medium-sized firms, which are responsible for most of the exports to Iran and which provide millions of jobs. Those companies need payment guarantees for their deals with Iran, and the EIHB, which was founded by Iranian businessmen in 1971 and is owned by four Iranian banks, was one of the few banks in Germany able to redeem letters of credit from Iranian trading partners.

Despite Iran's pariah status, Germany is still the third-largest exporter to the country, after the United Arab Emirates and China. Last year, German exports to the Islamic republic were worth €3.8 billion ($5.5 billion). Still, a number of major companies, such as Siemens and ThyssenKrupp, have recently decided to stop doing business with Iran. 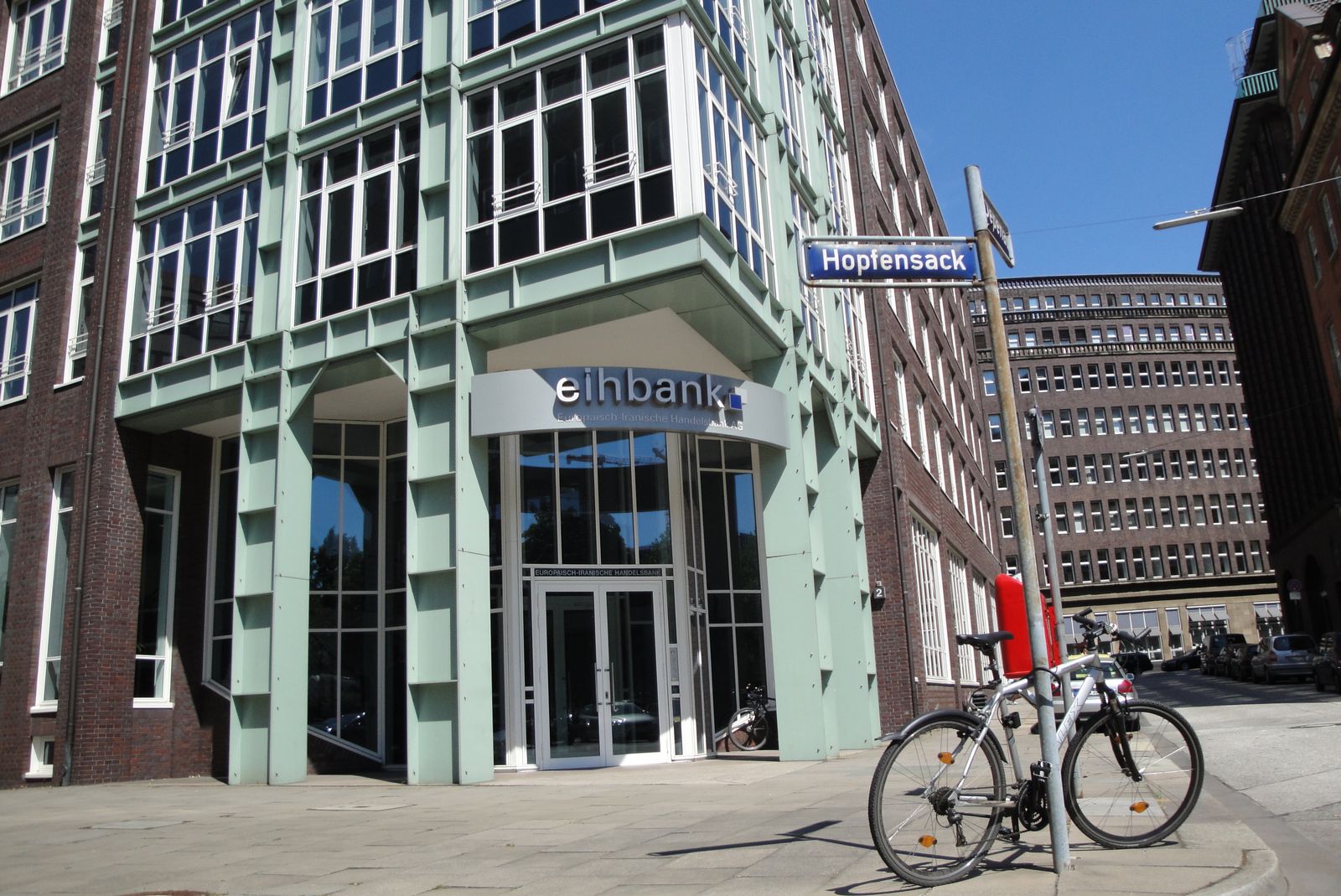 EIHB offices in Hamburg. Berlin is reportedly dropping its opposition to EU sanctions against the bank.