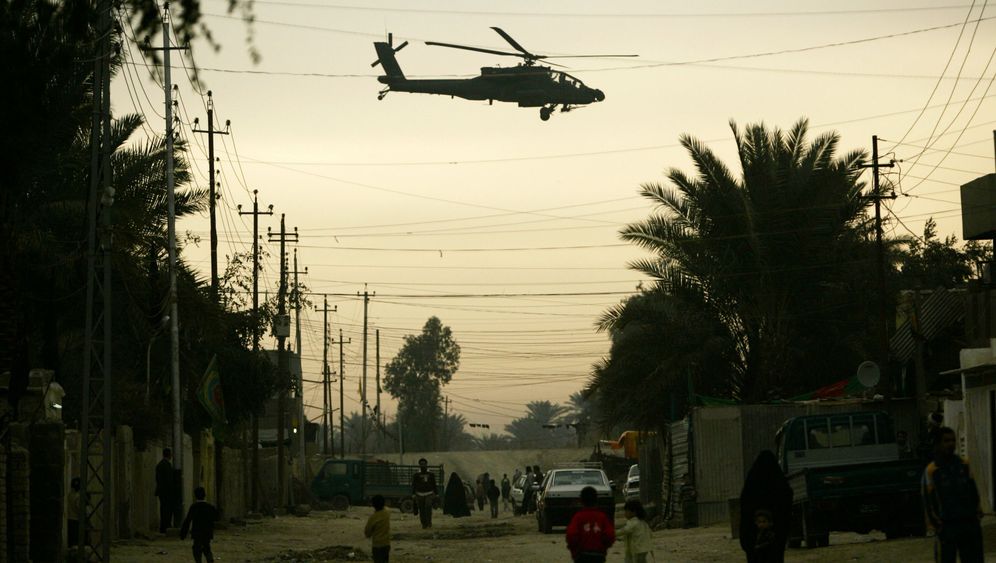 Photo Gallery: Fire in the Sky

The United States military report dated July 12, 2007, 9:50 a.m., is just a few lines long, 893 characters to be precise. The document, which is full of military acronyms, deals with an incident in Baghdad and is included in a category called "Direct Fire," which describes military clashes between Americans and Iraqis. It is one of 59,000 reports in this category included in the documents that WikiLeaks has now released on the Iraq war.

It isn't even particularly noticeable, not even because of the number of victims it describes. The report talks of "13 AIF KIA," in the military jargon of the US Army. Translated, it means that 13 enemies ("anti-Iraqi forces") were "killed in action." The report also mentions two wounded adults and two wounded Iraqi children. The six sentences relate chronologically how helicopters fired missiles at the enemy, apparently after US ground troops had come under small-arms fire.

It sounds like a routine firefight. But the incident described so tersely by the brief report would later change the way many people viewed the war. The events of that July morning were recorded on video. The incident has now become world famous, after the video was released by WikiLeaks. The footage shows a brutal helicopter attack in which US soldiers killed defenseless civilians.

'Look at Those Dead Bastards'

The supposed "anti-Iraqi forces" who were killed were probably Iraqis who were simply in the wrong place at the wrong time, including two employees of the Reuters news agency. The video also shows how the crews asked for permission to open fire on a minibus rushing to the scene -- and how they obtained it.

The two severely injured children, who were in the minibus when it came under fire, lost their father in the attacks. He had been driving them to school when he stopped to help the injured Reuters driver.

The shocking footage of the incident is the original video taken from one of the two Apache helicopters, codenamed Crazyhorse 18 and 19, that were involved in the incident. It is filmed from the perspective of the American shooter. In April 2010, WikiLeaks founder Julian Assange presented the video, which he had titled "Collateral Murder," at the National Press Club in Washington. At the time, it was the whistleblowing organization's biggest scoop to date.

The roughly 18-minute video is difficult to watch, partly because it isn't clear what's worse: the images or the recorded conversations of the helicopter crew. "Nice," says one crew member after a deadly salvo. "Look at those dead bastards." The conversation continues in a similar tone.

But there is a huge gulf between the brief text of the military report that has now been published by WikiLeaks and the footage captured by the helicopter's camera. The discrepancy makes clear that the military incident reports do not manage to capture the brutal reality of the war. In fact, the opposite is true -- the reports actually distort the reality.

Comparing the video evidence and the terse, unspectacular-seeming original report raises the question as to what might have happened during incidents where the internal military reports make for more dramatic reading. And there are plenty of those. Just looking at reports involving the tradition-steeped 227th Aviation Regiment with its fleet of Apache helicopters, which was responsible for the "Collateral Murder" incident, reveals enough examples.

In 2007, the Baghdad battalions of the Fort Hood, Texas-based unit were stationed in Camp Taji to the north of the Iraqi capital. For a total period of 15 months between the end of 2006 and early 2008, the soldiers flew missions from the base. Many of those operations involved particularly "robust" interventions, to use the military jargon.

The black Apache helicopters are heavily armed, cost about $20 million each and can fly at speeds of around 300 kilometers per hour (190 mph). They are also equipped with 30 mm cannons and Hellfire missiles. Ground troops who get caught up in firefights often call in the helicopters for support. Whenever the Apaches appeared in the sky over Baghdad, it wasn't uncommon for hell to break loose on the ground.

Another incident involving the helicopter codenamed Crazyhorse 18 on Feb. 22, 2007 stands out in the records.

On that day, attack helicopters chased a dump truck on the ground. The US helicopter pilots apparently identified a truck equipped with heavy weapons, from which mortar shells were being fired. They destroyed the vehicle. Two Iraqis fled headlong from the scene in a dump truck, heading north. Crazyhorse 18 went on their trail, and opened fire on them. Then something unexpected happened.

The dump truck stopped. The Iraqis "came out wanting to surrender," the report relates. Apparently, the American helicopter crew was at a loss for a moment and was unsure how to deal with the situation. They called via radio for support from a military lawyer. The report continues: "Lawyer states they can not surrender to aircraft and are still valid targets."

The attack helicopter was cleared again to "engage" the vehicle. Crazyhorse 18 fired a Hellfire missile at the two men, but missed the target. The two Iraqis then took refuge in a shack.

The helicopter crew did not give up. They opened fire on the shack. This time they hit their target. "Crazyhorse 18 reports engaged and destroyed shack with 2 x AIF (anti-Iraqi forces)," reads the report.

The document leaves little doubt that this was a deadly attack on people who clearly wanted to surrender. It could prove damaging for the US Army, even despite the opinion of the military lawyer quoted in the report. The incident is particularly shocking when one bears in mind that the US military has handled similar cases very differently in the past. During the Gulf War in 1991, for example, a group of Iraqi soldiers signaled their willingness to surrender with handkerchiefs, undershirts and bedding after they heard the sound of a drone overhead.

The US soldier who was piloting the aircraft by remote control from a warship asked his commander what to do. On that occasion, the answer was different from that given during the February 2007 incident -- the men were arrested instead of being killed.

During the course of Operation Desert Storm, Iraqi soldiers also successfully surrendered to Apache helicopters. On one occasion, 500 troops are said to have given themselves up when American attack helicopters appeared in the sky above them.

An additional protocol to the Geneva Conventions on the protection of victims of international armed conflicts states that a person who "clearly expresses an intention to surrender" is "hors de combat" and therefore "shall not be made the object of attack." That raises the question of whether the pilots involved in the Feb. 22, 2007 incident might have committed a war crime.

The two incidents are not the only ones in which Apache helicopters were involved and in which people died under dubious circumstances.

Only four days after the "Collateral Murder" incident, two helicopters codenamed Crazyhorse 20 and 21 flew out on an operation over Baghdad. The two-seater aircraft, which have a pilot and a gunner, always work in tandem.

According to the report of that operation, an American patrol came under small-arms fire at about 2:00 p.m. on that day in July 2007.

At 2:55 p.m., Crazyhorse 20 reported engaging two "anti-Iraqi forces" on the ground. Then came a report from the ground saying that a nearby mosque was calling upon fighters to assemble and attack the Americans. Later reports mentioned 50 to 60 "possible" insurgents. Almost at the same time, Crazyhorse reported a "final gun run" -- in other words, a final round of attacks with its on-board cannons.

The "unconfirmed" casualty count, according to the report, read: Twelve dead and eight to 10 wounded AIF -- and 14 dead civilians. When the supposed insurgents later left the mosque, heading in different directions, an unmanned drone took photographs of them. According to the internal military report: "No weapons were seen."

Not an Isolated Incident

On-board videos are likely to exist for those operations too and are probably still stored on US military computers today. That footage is probably no less dramatic than that of the "Collateral Murder" video.

The military reports that have now been published make it clear that the Apache attack of July 12, 2007 is, in all likelihood, not an isolated, tragic incident. It has only been investigated more closely than other events -- mainly because two Reuters employees died in the bombardment and the news agency demanded answers.

The US Army conducted an internal investigation into the "Collateral Murder" incident in the days after the fatal incident. The military concluded that the rules of engagement had not been violated.

The widow of the slain father, who had just wanted to take his children to school on that day, told Icelandic journalists earlier this year that her children were still deeply traumatized and needed expensive medication. She had still not received any help from the Americans, the woman complained at the time.

After the publication of the video, there was a surprising and very personal gesture. Two former soldiers of the unit that was on the ground wrote an open letter to the families of those who were killed and wounded in the US attack. "We write to you, your family, and your community with awareness that our words and actions can never restore your losses," wrote Ethan McCord and Josh Stieber. "We acknowledge our part in the deaths and injuries of your loved ones."

"We know that the acts depicted in this video are everyday occurrences of this war," the letter continued. "This is the nature of how US-led wars are carried out in this region."