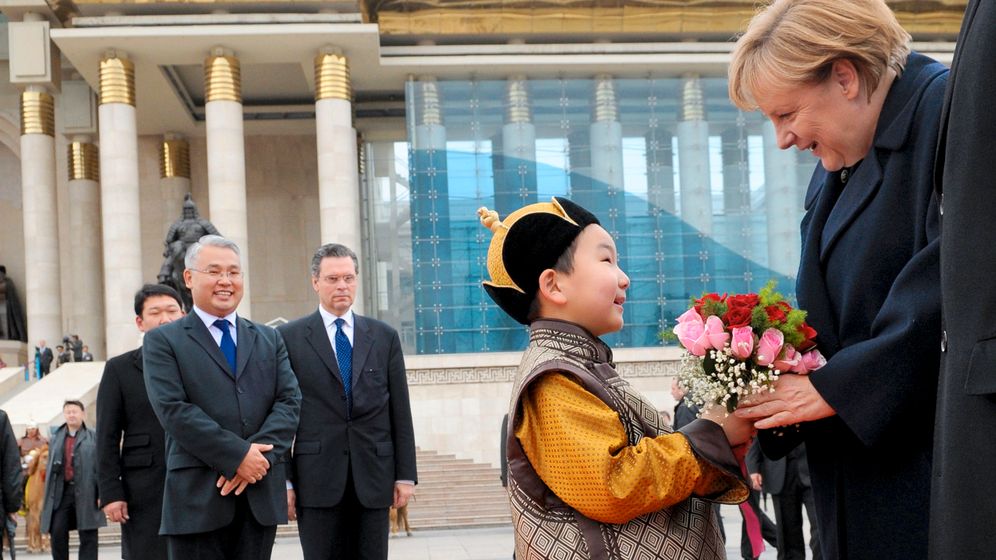 A visit to Ulan Bator is not without unique rules for diplomatic protocol. When German Chancellor Angela Merkel visited the Mongolian capital in October, she had to pay careful attention to the direction she walked as she stepped into a yurt at the governmental palace. Moving clockwise is of paramount importance.

Before long, though, she was invited to take her seat and get down to business. It was time to address the topic she had come to discuss: raw materials.

The chancellor is more than willing to travel to the ends of the earth, if it means she can secure Germany's supply of natural resources. Indeed, Mongolia hasn't been the chancellor's only stop on the search for more; she was recently in Angola and Nigeria as well.

She plans to report on the results of her Mongolia trip at an upcoming meeting with German industrial representatives. Ten companies, including BASF, Daimler, Evonik and ThyssenKrupp, have all joined forces to ensure the future supply of natural resources.

Called the "Alliance for Securing Raw Materials," the project is to participate in drilling and mining ventures abroad, bundling their market power. On average, five out of six exploratory ventures fail -- a risk the new alliance would like to share among as many participants as possible.

Merkel's role is to provide organizational assistance for the project, open doors to leaders in countries rich in natural resources and to lend the undertaking the necessary gravitas. In the past, such an alliance between politicians and corporations would have been seen as violating the basic principles of a market economy. Today, it's considered modern industrial policy.

Resource Hunting Around the Globe

A task force from the participating companies has already agreed on many of the details. Each of the corporations will participate as a shareholder, providing a six-figure sum to the raw materials alliance. This joint venture will then go resource hunting around the globe, with the advantage for the participating companies being that they hold the right of first refusal. This is expected to provide a speedy injection of at least €1 billion ($1.4 billion) into new raw materials projects.

Three German ministries -- those for economics, foreign policy and development -- will participate as well, a role the project outline describes as "exceptional political support." Another body with an important role is the Federal Institute for Geosciences and Natural Resources, a governmental agency already seeking out deposits of natural resources, from manganese nodules in the Pacific Ocean to natural gas in the Arctic. This August, Federal Research Minister Annette Schavan, a member of Merkel's Christian Democrats (CDU), commissioned the construction of a new research ship to be used for the exploration of the world's oceans. The deep seas are a "treasure chest," Schavan says, adding, "We want to be part of it."

The German government also hopes to reach a raw materials agreement with Kazakhstan by the end of this year. Kazakh Ambassador Nurlan Onzhanov was invited to visit the parliamentary group of the CDU and its sister party the Christian Social Union (CSU) last Wednesday. Since word has gotten around about his country's wealth of manganese, tungsten, copper and molybdenum, the ambassador has become a popular man. Other countries the German government hopes to partner with include South Africa, Peru and Chile. There, the sought-after resource is lithium, crucial for the production of the latest-model electric car batteries.

Currently, supply problems are particularly severe when it comes to so-called rare earths. The term refers to 17 chemical elements with tongue-twister names such as dysprosium and praseodymium, but they are essential for manufacturing almost all modern industrial products.

Take, for example, fluorescent light bulbs manufactured by Osram at its factory in Augsburg. The finished tubes are coated with yttrium, cerium and europium so that they glow white. Nothing is better suited for this function, Osram representatives say, adding that these rare earth elements are "essential."

Wind turbine manufacturers need neodymium for their generators. Auto parts makers use lanthanum in their catalytic converters. The optics industry uses cerium oxide as a polishing agent. Rare earths even have an application in livestock farming, as a performance-enhancing additive in animal feed. Not a single iPod, plasma screen, electric motor or modern weapons system would be operable without rare earths.

German industry, too, has developed a serious addiction and manufacturers are complaining as prices for these high tech metals skyrocket. At the beginning of this year, terbium oxide cost around $625 per kilogram (2.2 pounds). Now, producers charge over $3,000. For other rare earths, prices have increased over a thousandfold in the space of a year. Just a few weeks ago, Osram explained its own price increases of up to 25 percent as resulting from the "explosive increase" in the prices of raw materials.

As demand for rare earths has risen, so too has the global competition to procure them. German government officials and industry leaders alike point to China as being their primary competitor. "China has gone from being an exporter to an importer of raw materials, which has fundamentally changed conditions on the market," says Volker Steinbach, head of the German Mineral Resources Agency.

China has created a global network of contracts, cooperative ventures and political deals. At the center of this network is Africa, long ignored by the West. In exchange for a $6 billion loan to the Democratic Republic of Congo, China received access to a copper and cobalt mine there. Loans of over $4.5 billion to Angola will be paid back in oil. China has also invested in Zambia, in order to access the country's copper, and is currently obtaining 7 percent of its petroleum from Sudan. Beijing has been able to secure these governments' favor through the construction of sports stadiums, roads, rail lines and hospitals.

Meanwhile, China itself is reluctant to part with its own raw materials. The country meets over 95 percent of global demand for rare earths, with reserves far larger than those of Australia or the US. In 2010, China raised its export duties and set limits on exports, and has since controlled prices more or less at will.

In recent weeks, as the global economic outlook took such a downturn that even rare earth prices dropped, Beijing took immediate action. The Baotou Group, largest producer of rare earths and supplier of nearly half the world's total demand of 125,000 metric tons (138,000 US tons), promptly discontinued production for at least a month.

The move, officially justified as an effort "to balance supply and demand," drew criticism from the World Trade Organization. Chinese representatives at the G-20 summit in Cannes this week are likely to hear their share of complaints as well. But such criticism isn't likely to change much.

Indeed, when Chancellor Merkel travels the world these days, China is always along for the ride -- in her head and in the heads of her hosts. China has considerable influence in Mongolia and Angola, and is trying to achieve the same in Nigeria.

Merkel had long made such countries an offer very different from that of China. Germany isn't looking for imperialist influence, she has always told her hosts, but wants to help in a sustainable way. Countries that allow Germany access to their raw materials receive compensation not only in money, but also especially in education, with Germany's dual system of apprenticeships and vocational training serving as Merkel's bargaining chip. You give me raw materials and I'll send teachers and trainers to educate your next generation, that was Merkel's deal.

The planned raw materials alliance puts an end to that strategy of modesty. From now on, Germany will fight more aggressively for natural resources. As the outline for the planned alliance states: "The supply of imported raw materials is undergoing a paradigm shift." 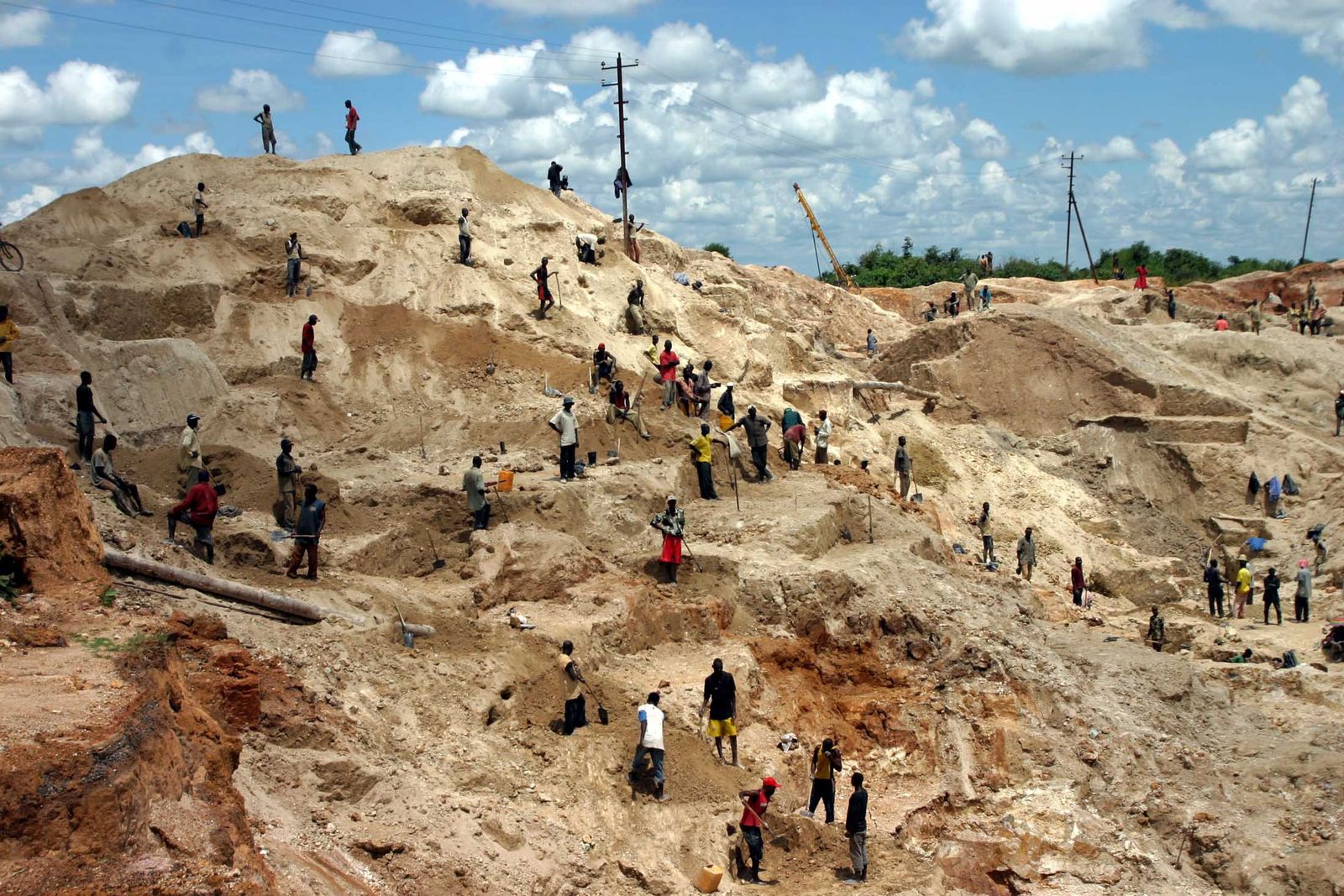 China has gone from being a net exporter of raw materials to a net importer in recent years. Beijing has struck deals with several countries in Africa in recent years to secure supplies. Here, an open pit copper mine in the Democratic Republic of Congo.