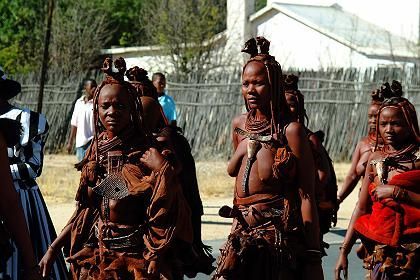 Ovahimba women belonging to the Herero tribe attend the ceremony in Omaruru, Namibia on Sunday.

Eleven descendents of General Lothar von Trotha, the German commander whose forces massacred the Herero tribe in 1904, have travelled to the former German colony of Namibia to express their shame and sorrow for his actions.

They attended a ceremony in the town of Omaruru, some 250 kilometers west of the Namibian capital Windhoek, on Sunday to mark the anniversary of the 1904 campaign by the troops of Kaiser Wilhelm II. Some 65,000 Herero and 10,000 members of the Nama tribe were killed in the campaign following a revolt against German rule. Historians have referred to the campaign as Germany's first act of genocide, almost four decades before the Holocaust.

"We are ashamed of the terrible events that took place in Namibia a century ago," said Thilo von Trotha, 67, the spokesman for the family members. About a dozen Namibian police officers stood by to protect the delegation after the leader of the Herero, Kuaima Riruako, had warned that their lives might be in danger. The ceremony passed off peacefully, however.

The Hereros started a revolt on Jan. 12, 1904, killing 123 German traders, settlers and soldiers in protest at being expelled from their land, recruited into forced labour and compelled to give up their culture and tradition.

The German Reich quickly sent reinforcements under a new commander, Prussian General Lothar von Trotha, who was bent on annihilation. Trotha had a reputation for brutality and intransigence and his appointment as head of the German Schutztruppe, the Protection Force in what was then referred to as German Southwest Africa, was opposed unsuccessfully by a number of fellow commanders. 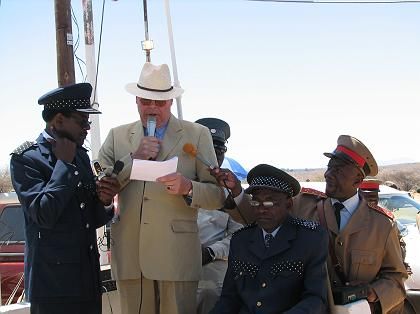 "I wipe out rebellious tribes with streams of blood and streams of money," he said shortly after arriving.

He issued a proclamation to the Herero people dated Oct. 2, 1904, that effectively amounted to a extermination order. In the letter, he offered 1,000 marks to anyone who delivered a Herero captain to German forces, and 5,000 marks for Herero leader Samuel Maherero. If the people did not comply, he warned he would banish them from the country.

"Within the German border every Herero with or without a rifle, with or without cattle will be shot, I won't take any more women and children, I will drive them back to their people or order them to be shot," he wrote. "These are my words to the Herero people." The proclamation was signed "The great general of the mighty German Kaiser."

The uprising culminated in a battle won by the well-trained and well-equipped Germans who had machine guns of the kind that would wreak havoc on World War I battlefields 10 years later. Thousands of Hereros were driven into the vast Omaheke desert which the Germans sealed off. Thousands died of thirst and starvation, the rest were sent to concentration camps.

Germany was a latecomer in 19th century colonialism, playing catch-up with Britain and France. It rapidly became the third-largest colonial power, ruling territories in Africa, China and the Pacific five times the size of the fatherland. It lost all its colonies after World War I. Control over Namibia passed on to South Africa until the country gained its independence in 1990.

While Germany has provided significant amounts of aid to Namibia over the years, it has stopped short of making a formal apology, to avoid exposing itself to billions of dollars in compensation claims from Herero descendents.

The Herero People's Reparations Corporation filed claims with a US court in 2001 for $2 billion in compensation from the German government and several companies, but its legal action was unsuccessful, partly because international conventions against genocide weren't agreed until decades later. The massacre happened too long ago for a civil lawsuit to be dealt with in a German court.