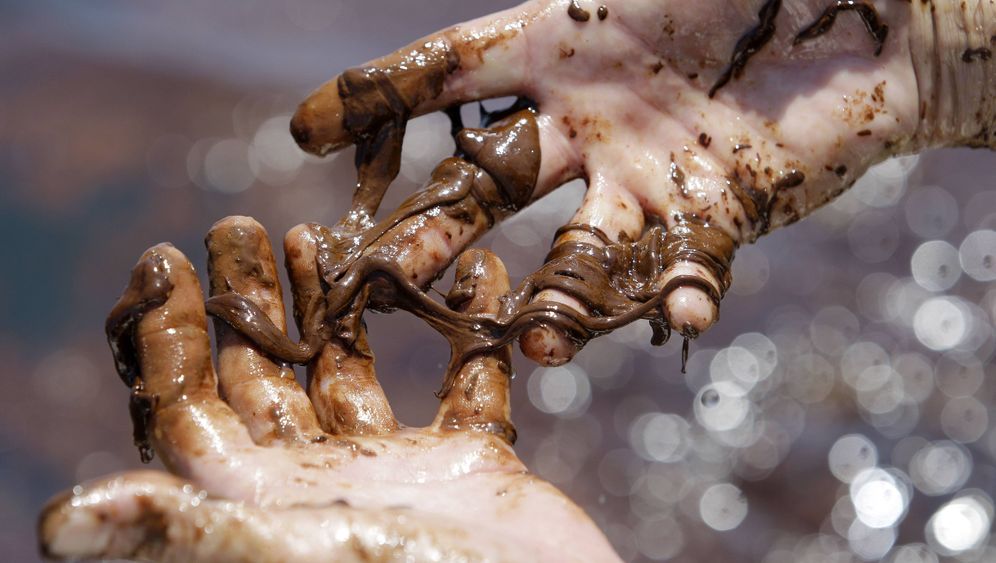 Photo Gallery: 'Out of Sight, Out of Mind'

Samantha Joye was sure she was right. Somewhere down there, the toxic clouds were sure to exist. And now she was holding the evidence in her hands. A thin film of oil glistened in one of the small sample bottles Joye had filled with water taken from more than 1 kilometer (3,300 feet) beneath the surface.

"You could see it. Everybody saw it," Joye, a professor of marine sciences at the University of Georgia, wrote on her blog. Besides, the sample taken from the Gulf of Mexico smelled as if it had come directly from a gas station.

Joye made this important discovery a few days ago on board the research ship Walton Smith, near the location where the Deepwater Horizon drilling rig went up in flames on April 20.

The scientists are now referring to the site as "Ground Zero." They have spotted oddly shaped "pancakes of oil" floating on the surface there, Joye reports, as well as "bizarre orange and black stringers, as deep in the water column as you could see."

The scientist lowered her sample container into this toxic soup. The preliminary lab results show what many had already feared: Massive amounts of oil are billowing beneath the water's surface in the Gulf of Mexico. Several teams of scientists have spotted clouds containing oil in the depths of the ocean, a number of which are several hundred meters thick and extend for several kilometers.

The discoveries have added a new dimension to the fight to contain the oil spill. While thousands of workers and volunteers are currently defending the coastlines of Louisiana, Mississippi, Alabama and Florida against the reddish-brown scourge, what could be a far greater ecological catastrophe is taking shape out in the ocean.

According to new estimates, more than twice as much oil has flowed into the Gulf of Mexico in the last 50 days than was spilled from the oil tanker Exxon Valdez into Alaska's Prince William Sound in 1989.

But where has all the oil gone?

Relatively little has reached the coasts so far, leading scientists to fear that much of it is still lurking underwater. And in addition to the oil, the water is contaminated with massive amounts of chemicals that BP workers have been spraying for weeks to disperse the oil. "In my opinion, the situation is comparable to that of a hurricane that's building up off the coast and gaining in strength," warns Larry McKinney of the Harte Research Institute for Gulf of Mexico Studies in Corpus Christi, Texas.

Majestic whale sharks and rare Kemp's Ridley sea turtles are now swimming through the oily water. Sperm whales and thousands of dolphins are forced to breathe the toxic fumes on the ocean surface. A myriad of plankton organisms migrate, in a day-and-night rhythm, up and down through a water column contaminated with oil. Finally, ancient reefs on the ocean floor are suffering beneath the toxic soup.

'There Aren't Any Plumes'

"We are now entering a different phase of this disaster," Samantha Joye, the marine biologist, told the news agency Bloomberg in an interview. "Everybody has been focusing on the surface impacts, which is normal. But now we've got to switch gears and start thinking about the deep water."

For Joye, it's also a matter of her reputation as a scientist. Her team discovered the first signs of the monstrous oil clouds in mid-May. But BP CEO Tony Hayward disputes that the clouds even exist. "The oil is on the surface," he said. "There aren't any plumes." He argues that, because oil is lighter than water, it will always float to the surface. BP scientists, at any rate, have found "no evidence" of underwater oil clouds.

The oil executive is trying to prevent the environmental damage from becoming more and more apparent. The US's entire Gulf fishing industry could be shut down for years if the scientists' fears turn out to be true. In the end, the overall damage will determine how much BP will be expected to pay in compensation.

Despite BP's claims, the evidence of submarine pollution is now overwhelming. Scientists at the University of South Florida also recently discovered an enormous amount of oil at about 1,000 meters (3,280 feet) beneath the surface. The cloud of finely dispersed oil particles extends for 35 kilometers, billowing to the northeast of the Deepwater Horizon accident site. It's one of the most species-rich regions of the Gulf of Mexico.

An Underwater World in Peril

The scientists lowered highly sensitive measuring devices from on board their research ship, the Weatherbird II, and took water samples from various depths. Their results suggest that the cloud is drifting toward the DeSoto Canyon, which is near the coast, on the edge of the continental shelf. There, nutrient-rich water rises from the depths and supports an enchanting underwater world. Fishermen catch meter-long red tuna, shimmering kingfish and grouper. Magical gardens of intricately branched corals flourish on the sea floor. Green brittle stars, glass-rope sponges and fish like the splendid alfonsino and the blackbelly rosefish populate the reefs.

"Unfortunately, the depth at which the oil is coming out of the well is home to the greatest diversity of species in the entire Gulf region," explains Thomas Shirley of the Harte Research Institute. Biologists have counted more than 1,000 species at that depth, and they can only guess at what the oil and chemicals are doing to them.

Scientists are already collecting the first signs of the damage. Biologists John Dindo and Andrea Kroetz are bent over their catch at Dauphin Island Sea Lab in Alabama. They have just returned from a scientific haul. Atlantic sharpnose sharks, marked with yellow plastic bands, have been placed on ice in boxes, next to valuable red snappers with sharp teeth.

The scientists, who spent 22 hours at sea, are working under high pressure. "We are experiencing these things for the first time," says Dindo. "We have to collect as much data as possible so that we can study the effects of the oil on the animals." The fish look normal, but laboratory analyses must now be performed to determine whether the pollutants have already affected their tissue.

Dindo has been working at the Sea Lab on Dauphin Island for 37 years. The island off the Alabama coast lies directly in the path of the oil. The first reddish-brown lumps of oil washed up on the region's beaches last week. The military has built a wall to protect the island's sand bars.

But Dindo is more concerned about the open sea than the beaches. "The spawning season for many fish has just started. What happens when fish eggs and larvae are bathed in oil?" the 61-year-old scientist asks. An entire year's worth of young fish could be lost.

The scientists are worried about acute poisoning, as well as genetic damage and later deformities. "The oil impairs the organ functions of the marine creatures," says toxicologist Joe Griffitt of the Gulf Coast Research Laboratory in Ocean Springs. This, he adds, will impair fertility and larval development. Oil components could also become concentrated in the food chain.

The oil is suspended in the water in tiny, barely visible droplets, which the scientists call "rosebuds." The emulsion develops directly at the well head, deep beneath the surface, says Griffitt. When the hot oil shoots out of the ocean floor and comes into contact with very cold water under high pressure, methane gas is released, which then atomizes the oil.

The toxicologist fears that the chemicals that BP are using to fight the oil are actually promoting the formation of oil clouds. The company has already used about 3.8 million liters of the chemicals, about a quarter of which they released into the water directly at the wellhead.

"The oil alone would slowly rise to the surface," says Griffitt, "but when it becomes mixed with the dispersants, it remains in the water column." Although bacteria attack the emulsion there and gradually destroy the oil, the microorganisms consume much of the oxygen dissolved in the water in the process. The result could be that fish and zooplankton die off on a large scale due to the creation of an oxygen-deficient "dead zone." "The chemistry of the sea water is being completely turned around, and we have no idea what happens next," says Griffitt.

In fact, scientists know very little about the effects of oil deep in the ocean. Neither BP nor the US scientific authorities have attached much importance to the issue until now. For the first time, the National Oceanic and Atmospheric Administration (NOAA) has now dispatched a ship, the Gordon Gunter, to study the phenomenon. The scientists on board are using various devices, including heavy-duty sonar equipment and an underwater robot named "Gulper."

But the funding for independent projects is coming in very slowly, even though BP has pledged $500 million in immediate aid to support the research. Zoologist Eric Hoffmayer of the Gulf Coast Research Laboratory, for example, has been waiting for weeks to receive money from the emergency funds.

Time is of the essence for Hoffmayer. He is studying one of the most fascinating animals of the Gulf, the whale shark, which the oil is putting in mortal danger. "When whale sharks swim into the oil, their gills become clogged," the zoologist warns. "They can no longer absorb oxygen and die within a few minutes."

The sharks, which can grow up to 14 meters (46 feet) long, are particularly at risk because they constantly swim with their mouths open to filter microorganisms out of the water. In the process, up to 6,000 liters of water an hour flow through their respiratory organs.

Ironically, one of the most important feeding grounds for the massive animals lies off the mouth of the Mississippi River, where Hoffmayer has already spotted groups of up to 50 individuals. The sharks are attracted by large masses of plankton, which feast on the tons of nutrients that the river carries into the ocean.

'Out of Sight, Out of Mind'

What can be done about the oil clouds beneath the ocean surface? The scientists don't have any answers. And the ghostly oil shroud is growing larger and larger. Samantha Joye and her team have located a cloud near the damaged wellhead that is about 15 kilometers long, 5 kilometers wide and 100 meters thick. Besides, the oil farther to the south appears to have reached the Loop Current, an ocean current that could carry the oil to Florida. Other currents could even carry it up the US East Coast and into the Gulf Stream.

The scientists' greatest concern is this year's hurricane season. "A powerful storm would be enough to distribute the oil throughout the entire water column," warns James Cowan, an oceanographer at Louisiana State University.

A technology to remove the pollution doesn't exist. Besides, BP is hardly likely to clean up the water voluntarily. In fact, it might suit the company all too well if the disaster remained hidden beneath the waves, says Cowan. "Out of sight, out of mind."

Nevertheless, Cowan recently got a first-hand look at the underwater oil spill when he lowered a robot with an attached camera to a depth of 150 meters, about 120 kilometers west of the accident site. "First we saw droplets of oil, but then we couldn't see anything at all," Cowan reports.

The underwater oil soup was so thick that it clogged the camera lens and the robot's headlights.

15 Bilder Photo Gallery: 'Out of Sight, Out of Mind' 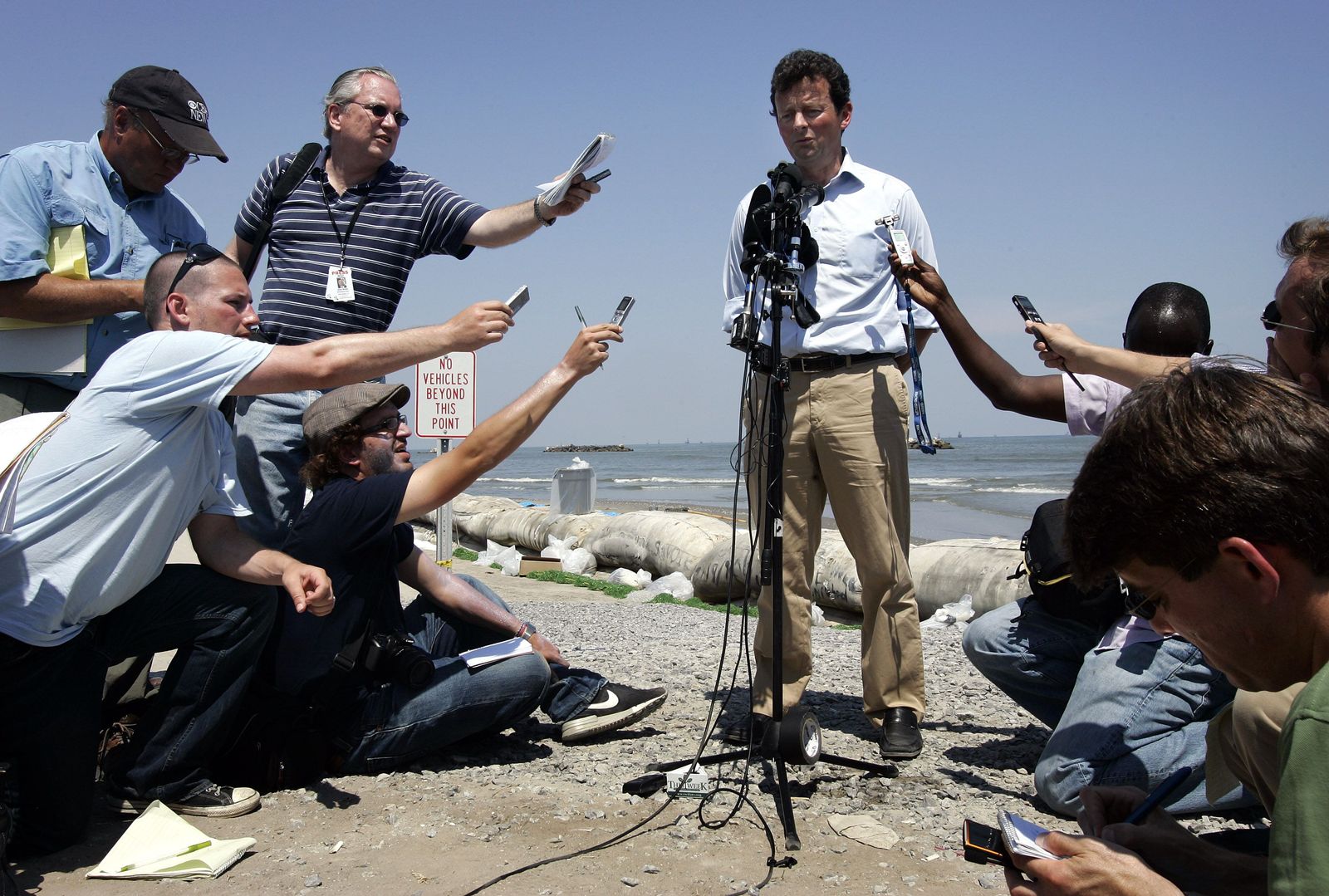 BP CEO Tony Hayward (pictured at a press conference in Louisiana on May 24) disputes that the oil plumes even exist. "The oil is on the surface," he said. "There aren't any plumes." He argues that, because oil is lighter than water, it will always float to the surface. BP scientists, at any rate, have found "no evidence" of underwater oil clouds.