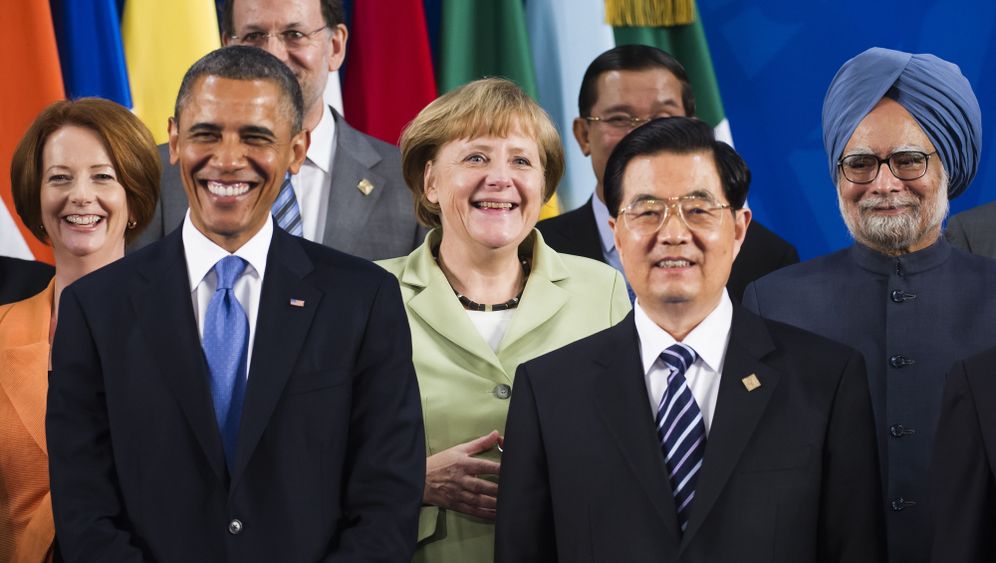 It is said that a surfeit of praise should make one wary. If that is the case, then German Chancellor Angela Merkel should be particularly on her guard following the G-20 summit which came to an end on Tuesday in Los Cabos, Mexico. A succession of world leaders lined up to offer her praise.

During his final press conference, French President François Hollande offered that he has the highest respect for the German chancellor. British Prime Minister David Cameron too said that he held Merkel in high esteem. A senior US official said that Berlin "is playing a very constructive role" in the euro crisis, with US President Barack Obama adding that he was confident Europe would be able to "break the fever."

Even International Monetary Fund head Christine Lagarde departed from her harsh tone of late to offer praise, if not to Merkel, then to European leaders in general. "In Los Cabos," she said, "the seeds of a pan-European recovery plan were planted." She added that leaders had committed "to take all measures necessary to safeguard the integrity and stability of the euro area."

The upbeat tone came after a two-day conference among leaders of the 20 largest industrial and developing countries, a meeting that was almost entirely dominated by the euro crisis. And the German chancellor was at the center of attention. Many see her refusal to consider euro bonds, direct aid to European banks and other measures proposed to soften the crisis as a major hindrance to solving the problems facing the common European currency.

During the meeting, Merkel -- together with Hollande, Spanish Prime Minister Mariano Rajoy and Italian Prime Minister Mario Monti -- were on the hot seat, forced to explain to the rest of the world exactly how they planned to finally bring Europe's enormous debt problems under control. And they had to promise to do even more to save the euro than they have already.

In the end, the gathered leaders came up with a declaration called the Los Cabos Growth and Jobs Action Plan and also highlighted for the first time the intention to create a banking union within the euro zone. "We support the intention to consider concrete steps towards a more integrated financial architecture, encompassing banking supervision, resolution and recapitalization, and deposit insurance," the summit's final statement reads.

Befitting a G-20 summit, the language is anything but concrete. But by putting such intentions into writing, the euro-zone leaders present at the meeting have raised expectations significantly. Merkel too, it would seem, made several concessions in the many side meetings that took place in Los Cabos. Both the US and IMF chief Lagarde were notably optimistic following recent weeks of gloom.

But the euro zone hasn't only committed itself to taking long-term steps to strengthen its banks and financial system. They are also, as US Treasury Secretary Timothy Geithner said on Tuesday, "trying to make sure in the very near term (that) they put in place a set of measures that can help make sure countries undertaking the reforms, like Spain and Italy, can borrow at sustainable interest rates."

He also, however, made clear that the work is not yet done. Now, he said, all eyes are on the European Union summit scheduled for the end of this month. "It is going to be a really critical summit for them," Geithner said.

Geithner declined to go into detail, saying instead that "you're going to hear more from the European leaders in the coming days about the specific proposals they're going to put in place." But his intimations regarding interest rates on Spanish and Italian sovereign bonds raise questions. There are, after all, only two ways to guarantee lower borrowing rates for the two countries, the third and fourth largest economies in the euro zone. Either they will have to refinance their debt with the help of the two euro bailout funds, though it is doubtful that the funds -- the European Financial Stability Facility and the European Stability Mechanism -- are large enough to take on both countries. Or, there will have to be a communitization of European debt, either in the form of euro bonds or, the more recent pet solution, so-called euro bills with a maturity of one year or less.

It is also unclear what measures Berlin would be willing to support. Merkel, in any case, refused to show her cards on Tuesday. She was the only leader from Europe not to give a press conference at the close of the summit, preferring instead to board her plane back to Berlin. She seemed eager to avoid being pinned down to a specific course of action or raising expectations for the EU summit. She has always seen efforts to shore up the common currency as a long-term process made up of small, carefully considered steps that must come in the correct order. It seems unlikely that she will depart from this method in the coming weeks.

Still, preparations for the EU summit are in full swing. Merkel lands in Berlin on Wednesday before receiving Dutch Prime Minister Mark Rutte in the evening. On Friday, she will fly to Rome for a meeting with Hollande, Rajoy and Monti.

What exactly they might be planning remains under wraps. But British premier Cameron said he saw "fresh impetus" in efforts by his Continental colleagues to solve the crisis. The euro zone, he said, now seemed willing to "use all the mechanisms, institutions and firepower that they have to stand up and support their currency," he told reporters on Tuesday. The permanent euro bailout fund, the ESM, will enter into force on July 1, a fact which appears to be playing a large role in the current thought process.

Hollande sounded more cautious. "Let's use (the mechanisms) at the right moment with the right dose," he said. He also made an explicit reference to a greater role for the European Central Bank. The euro zone, he said, must organize itself. "We have to transform our concepts into action," he said.