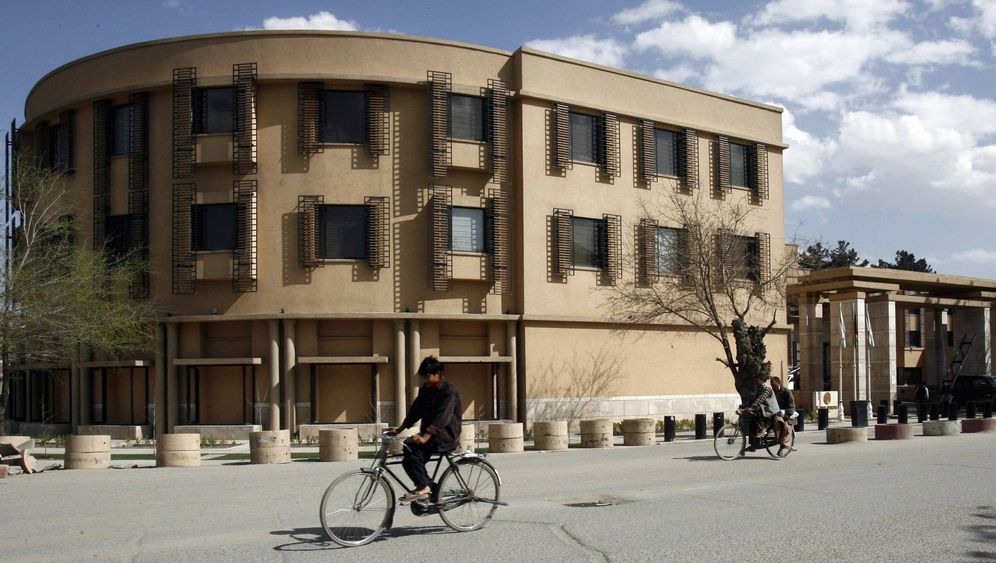 The hotel guest is relieved when the receptionist accepts his credit card with a smile. "Thank God," he says. "A few years ago, I couldn't pay with a card. No credit card companies had branches in Afghanistan! I'm relieved that I don't have to drive out to get cash." A journey through Kabul is not without "potentially fatal risks," he adds. But now all that can be avoided.

Not much else has changed since 2005, when the five-star Serena Hotel opened its doors in the center of Kabul. Enclosed by towering concrete walls and barbed wire, the sand-colored building is surrounded by lush green lawns and manicured flower beds -- a haven of luxury amid chaos. Snipers patrol the roofs, and entry, strictly controlled, is subject to numerous security checks. Guest are patted down, while their baggage is scanned twice and sniffed for explosives by large dogs.

Stickers with guns crossed out in bright red circles are all around the hotel, but it is still patrolled by young gunmen with their hair slicked back and pistols poking out from under their suit jackets.

This niche market of luxury hotels in war zones is dominated by the Serena chain. Founded in the 1970s, Serena operates 36 five-star hotels across Africa and Asia. Their branch in the Pakistani capital of Islamabad is their "flagship" model. A fortress on the top of a hill, it operates under the same tight security measures as its Afghan counterpart. Other Serena destinations include Kigali in Rwanda, Kampala in Uganda, and their latest venture, the Serena in Dushanbe, Tajikistan.

The Serena chain is expanding. New hotels are being planned for Damascus and Aleppo in Syria, and Herat and Mazar-i-Sharif in Afghanistan. "One day, it will be possible to travel in Afghanistan again," says an optimistic staff member at the Serena Kabul. "When that happens, we want to be the first to offer tourists the possibility of a first-class stay." An Afghan travel company is already said to be preparing travel itineraries in anticipation.

But the Kabul business is barely profitable. When the former Hotel Kabul was renovated to become the five-star Serena, the project cost over $30 million. Now it is seldom more than half-full. The majority of clients -- businessmen, diplomats, aid workers, consultants, journalists, and important dignitaries -- are returning customers. It's rare for them to pay the full price of $356 per night. They usually get the rooms for a third of the asking price.

It wasn't just the construction that was expensive, though. The day-to-day costs of running the hotel add up too. The huge security bill is compounded by importing products that aren't available in Kabul, mainly food. Even the soap is imported. Alcohol, which is forbidden in strictly Islamic Afghanistan, is not available to guests in the Serena Kabul. Clients in the Serena in Islamabad are allowed to enjoy alcohol in their rooms -- but only if they're not Muslim.

The business is not without its dangers. Guests avoided the hotel for months after three suicide bombers forced their way into the Serena Kabul's lobby, armed with guns and explosives, and killed five people in 2008. The following year rockets were shot into the hotel compound. The hotel's prime location in Kabul, near government ministries and foreign embassies, makes it all the more susceptible to attack.

But the Serena management claim that their business works because money is not their sole motivating factor. The chain is owned by the Aga Khan Development Network, the largest private development agency in the world. At the helm sits the billionaire prince Karim al-Husseini, 75, whose wealth and penchant for beautiful women have entrenched him as a darling of the tabloid press. He made headlines last autumn when he paid his ex-wife €60 million in their divorce settlement.

Al-Husseini is also the Aga Khan, the religious leader of the Ismailis. A liberal community of Shia Muslims, the Ismailis have about 20 million followers worldwide. The Aga Khan is believed to be a direct descendant of he Prophet Mohammed, which means al-Husseini has a legacy to foster.

Over more than half a century, he has built up a widespread network of development foundations working in 16 countries across the globe. Projects span from building hospitals to cultural preservation. Supported by the World Bank and the Norwegian government, the Serena hotel chain is al-Husseini's foray into development tourism. The Aga Khan is committed to combating discrimination against Muslims. "We don't do enough to illustrate to the peoples of our world the greatness of the Islamic civilizations and culture of the past," he said at the beginning of a new project in 2008.

Employees of the hotel in Kabul stress that the business isn't about maintaining a presence in crisis zones, but providing jobs and developing tourism in unstable economies. By working alongside the Afghan government and encouraging foreign investors to develop the country and its tourism industry, the Serena is helping to improve the situation there, they say.

By local standards, the hotel pays its employees above-average salaries. Staff say that, as a rule, they don't get sacked. The company also invests in their children's educations and in their healthcare and retirement. "It's rare to find an employer like this in Afghanistan," says one employee. The sentiment is echoed among their colleagues in Pakistan. Three years ago, when the Taliban controlled the Swat Valley, guests shunned the local Serena. When the Pakistani army began a counter-offensive in 2009 and the hotel had to close for over a year, none of the Serena employees there were fired.

Security remains the top priority in this niche market, especially in a city like Kabul, where it's not unusual to see Serena Hotel guests dining in bullet-proof vests while armed security guards patrol the entrances. But the world inside and outside of the Kabul compound, separated by security checks and concrete barriers, have little to do with each other. Even the hotel managers of the Serena Kabul barely know the city outside: they live in the Serena during the week, then fly home to Pakistan for the weekend.

The man who paid at the hotel reception with his credit card will stay in Kabul -- or in the Serena, to be more precise -- for three days. As a development consultant, he arranged for all of his meetings to take place in the hotel. "Not a single time" will he leave the hotel, he says. When he goes, he will have seen Kabul twice: on his way to and from the airport through the tinted windows of an armored car.