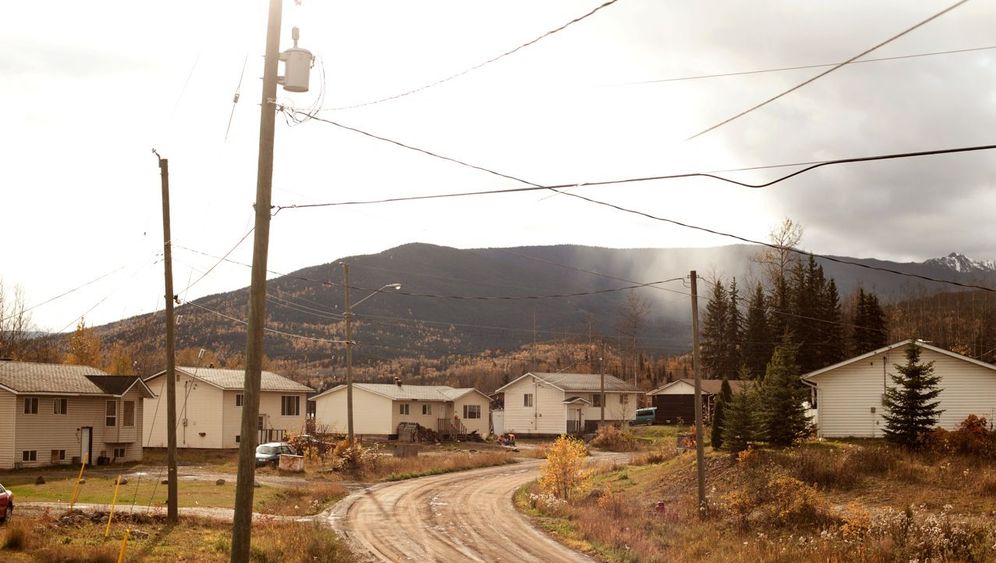 The view from our van could be straight out of a tourism brochure. There are snow-covered peaks, forests painted in fall colors, and next to the road flows a mountain stream where fishermen are catching salmon.

As we travel deeper into this idyllic landscape, the mood of our driver, Gladys Radek, becomes darker. She plays the Patsy Cline song "If I Could See the World (Through the Eyes of a Child)," over and over again. It is a ballad about longing for a childhood like the one Gladys never had.

Gladys was born 56 years ago on the reserve for the Gitxsan indigenous people in British Columbia, but she never gets homesick as she drives along Highway 16, the "Highway of Tears."

"There are too many ghosts," she says.

The ghosts are the women who have been disappearing without a trace along the 700-kilometer-long (435-mile-long) stretch of highway. Official police statistics list 18 women in all, 17 of whom are First Nation, as much of the indigenous population in Canada is called. Amnesty International assumes, however, that there are considerably more. Not a single case has been solved.

Locked up By Day, Abused at Night

That doesn't surprise Radek. It speaks to her own personal experience. The life of a native woman like her doesn't count for much here in northern Canada, some 200 kilometers from the border with Alaska. To her, it's clear what must have happened: The women were picked up on the stretch between the reserves, the gold mines and the logging camps, raped, killed and dumped along the side of the road.

We arrive in Prince Rupert, where the Highway of Tears reaches the Gulf of Alaska. Unemployed indigenous people hang around in dingy coffee shops. Almost all of the fish-processing plants that once employed many in the town have shut down. There was too much competition from Japan.

Radek is uncomfortable. She doesn't like this place. When she was a small child, her foster father spent the summer fishing in the harbor. Radek spent her days locked below deck on the boat, until he came for her in the evening.

It was here, at the entrance to town on Highway 16, that her niece Tamara disappeared five years ago. She was 18 years old. A ghost.

Vicki Hill, 35, has spent her entire life in Prince Rupert. She brings a folder with photos and newspaper clippings to our meeting in a greasy Chinese restaurant on Main Street. They are all that remains of her mother, who disappeared on the highway on March 26, 1978, when Hill was only six months old.

The photo in one of the articles shows a beautiful young First Nation woman in a neat summer dress. Three days after she disappeared from town, her body was found 30 kilometers away. She was lying naked in a bush a few hundred meters from the highway.

Her death certificate lists "pneumonia" as the cause of death. But the last line of the document contradicts this finding. It states it was a "homicide." Still, there was no investigation. The body was buried at the cemetery in Prince Rupert, where it was never marked by a gravestone.

Who found the body? Who wrote the contradictory death certificate? Why didn't anyone investigate her death? Vicki Hill wants answers to these questions. She wants to be rid of the feeling that anyone walking down the street in Prince Rupert could be the murderer. But she is running up against a wall of silence.

Each Result Would Only Produce Uncomfortable Questions

It is a three-day trip from Prince Rupert to Vancouver, where we meet with the private detective Ray Michalko. He was once a member of the Royal Canadian Mounted Police, the Mounties. Six years ago, the Mounties formed a special commission to look into the Highway 16 cases. They invested $11 million (Canadian) to investigate the murders, but without success.

Michalko is not surprised. "They put 50 people in front of computers and hoped that a serial killer would jump out at them," he says. Data was collected and profiles were created. The only thing that is not being done, Michalko says, is real detective work.

He couldn't stand by and watch anymore, he says. That's why he drives along Highway 16 now, knocking on doors and asking questions. Michalko doubts that the special commission wants to achieve serious results. Each real result would only produce uncomfortable questions.

That's what happened during the trial against Robert Pickton, who was sentenced to life in prison in Vancouver in 2007. When police officers searched for illegal weapons on his pig farm outside Vancouver, they found pieces of clothing belonging to a missing Native prostitute. When police then scoured the farm from top to bottom, they found the remains of 49 Native women.

Pickton made pornographic films of the women and then slaughtered them like the pigs at his farm. But the trial also raised questions about the police and the justice system. How is it possible that his crimes could have gone undiscovered for so long? Why didn't anyone search for the missing women?

There was a public hearing on the Pickton case, and new details about corruption among the Mounties and justice officials emerged on a daily basis. Michalko believes that the special commission was formed so the debacle surrounding the Pickton case didn't extend to the cases from Highway 16.

Michalko believes the situations are similar. In his mind, they both shed light on the dark side of British Columbia. "When you think about the problems up there, you'll go crazy," he says.

'It is Unbearable, How Our People Are Forced to Live'

On the route from Prince Rupert to Prince George we pass Moricetown, the reserve where Gladys grew up. Her mother still lives here in one of the prefabricated houses that one can pick up at any home improvement store. The whole reserve is filled with them. The muddy street that connects them is littered with garbage -- TVs, wrecked cars and empty beer cans.

When Gladys' sister Peggy opens the door, a musty smell drifts our way. Peggy, Gladys explains to us later, has spent two years in prison for assaulting a man who was trying to rape her. Her mother is sitting silently on a sofa filled with holes, gazing absent-mindedly. Her hair falls in oily strands from her head, and her blind eye peers eerily around the room.

"It is unbearable, how our people are forced to live," Gladys says, when we turn back onto Highway 16 an hour later.

It is almost a miracle that she escaped this misery. Her parents were almost always drunk. When her younger brother starved to death, they were in a bar. Gladys was five then. That's when she was taken away from her parents.

Her foster parents didn't provide her with a childhood she would have wanted either. Her foster father started raping her when she was eight. When she was 13, she had the courage to report him to the reserve police. They shrugged their shoulders in response. After that, she packed her bags and ran away.

Gladys could easily have become one of the missing on the Highway of Tears. But she survived, moved to Vancouver, and raised five children. Now she is working as a spokeswoman for an organization for "Missing and Murdered Women." Her group estimates that there are 500 missing and murdered women in Canada.

"Someone has to give a voice to the many families who don't know what happened to their loved ones," she says. The worst, she says, is the feeling of being alone in your pain.