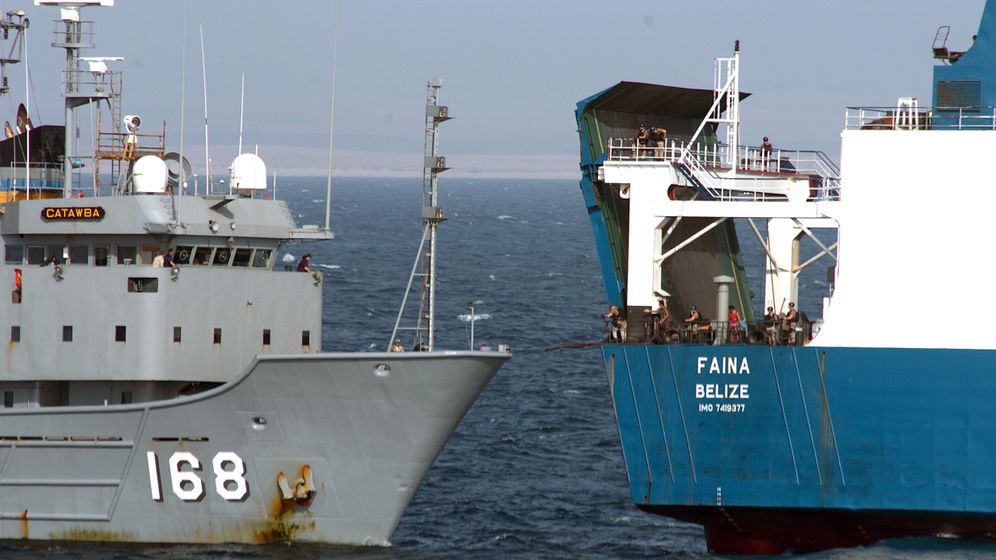 Sometimes things get so bad they're almost funny. Take, for example, when criminals hold up arms traffickers, and when politicians subsequently lie and are abandoned by their supposed friends -- even though they secretly do the same thing themselves.

That's exactly what happened in the so-called Faina affair, one of the most baffling cases of weapons smuggling in recent memory -- an affair which has only now come to light due to the leaked US diplomatic cables.

On September 25, 2008, Somali pirates seized the Faina, a harmless-looking freighter, while it was making its way from Ukraine to the Kenyan port in Mombasa. But they were astonished when they looked in the holds and discovered what was on board: a treasure trove of weapons from Ukraine, including 33 T-72 tanks, each weighing about 40 tons -- enough to win a small war in Africa. The Somalian pirates thus blew the cover on a secret transaction that was even more sinister than their own activities.

After almost five months, the Faina was released after, it is thought, a $3.2 million (€2.4 million) ransom payment, and entered the port of Mombasa on February 12, 2009. The Kenyan government denied all speculation that the tanks were really destined for the autonomous government of predominantly Christian Southern Sudan, which rebels from the Sudan People's Liberation Army (SPLA) have been trying to break off from the Muslim northern part of the country. Kenya insisted that the tanks were meant for their own army.

But the American documents now prove that that was false. While the Somali pirates were still holding the Faina captive, in faraway Washington, George W. Bush's second term as US president came to an end and Barack Obama moved into the White House.

On November 27, a cable classified as "secret" was sent to the US Embassy in Nairobi bearing clear instructions:

On December 15 and 16, Ambassador Michael Ranneberger and senior US military officials based at the US Embassy in Kenya went to work. As he noted in a dispatch dated Dec. 16, 2009, Ranneberger encountered immediate resistance. During a meeting with Kenyan Prime Minister Raila Odinga, he was informed "that the government of Kenya was committed to assisting GOSS (the government of Southern Sudan) and that there was 'intense pressure' from the GOSS to deliver the tanks." Odinga then went on to suggest that his government could deliver the tanks to Uganda, and that they could make their way into Sudan from there.

Ranneberger made his position to the prime minister clear: Washington would not tolerate such a deal. Delivering any tanks to Sudan -- whether via Uganda or any other country -- could result in sanctions against Kenya.

Finding Their Way to Sudan

The Kenyans were surprised. As they saw it, the Bush administration had always been kept informed about Kenya's arming of the SPLA rebels, had never opposed it and, in fact, had even contributed to it. When US military attaché David McNevin met with Jeremiah Kianga, the Kenyan chief of staff, and Philip Kameru, the head of Kenya's military intelligence, there was a tense exchange:

"Kameru mentioned that, in the government of Kenya's view, the tanks belong to the GOSS.... He added that (Kenyan) President (Mwai) Kibaki was personally very angry about this issue. During the meeting, Kianga commented that the government of Kenya was 'very confused' by our position … since the past transfers had been undertaken in consultation with the United States.... Kianga asked about the significance of what appeared to him to be a major policy reversal. … Kianga asked that the United States explain directly to the Government of Southern Sudan / Sudan People's Liberation Army why (they) are blocking the tank transfer."

Ambassador Michael Ranneberger, who had retained his position even after the change in administrations, obviously didn't feel comfortable about the situation. In a carefully worded cable to Washington, he wrote:

"The government of Kenya is understandably confused, as transfer of these tanks, in their view, dove-tailed with the goals of the United States … (of) converting the SPLA from a guerrilla force to a small conventional force capable of defending Juba (the rebels' capital)."

Ranneberger also suggested that a bit of sympathy should be shown for the Kenyan position.

"Over the past two years, officials from Kenya's Ministry of Defense have shared full details of their engagement with the SPLA as we have shared details of our training program for the SPLA, including combat arms soldier training, under a May 2007 Presidential Directive. ... It is difficult to persuade the Kenyans that transferring this equipment ... will merit sanctions if completed when they are well aware that the United States is continuing military to military security sector reform assistance to the SPLA."

The American documents say nothing about what ultimately happened to the tanks. Experts believe they found their way to Southern Sudan.