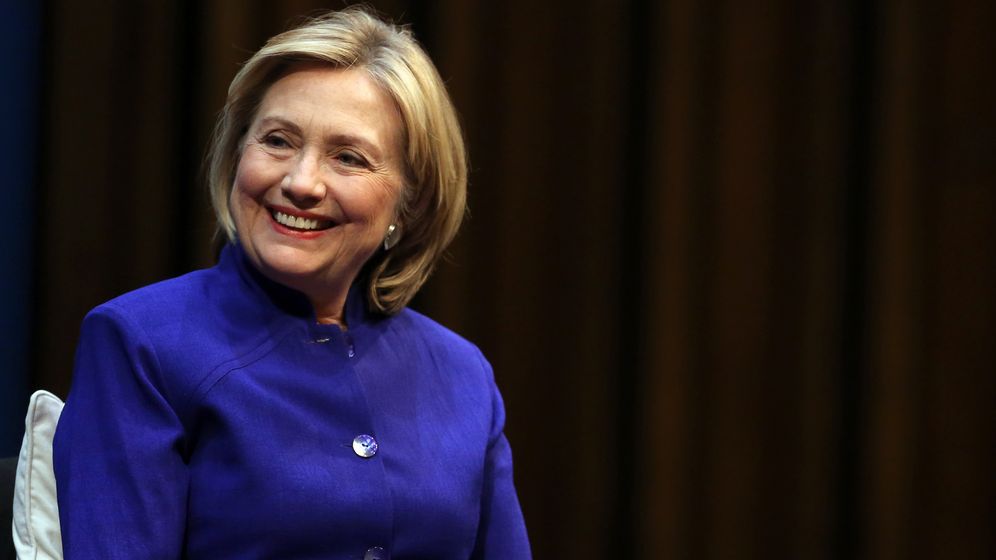 SPIEGEL: Madame Secretary, you've been in politics for over three decades. During that time, discontent with politics has increased considerably. Do you think expectations have become unrealistic?

Clinton: I think about this question a lot because we are putting an enormous amount of weight on one individual in our political system. In our country, we don't have a head of state and a head of government. We have one person: the president. That person has to fulfill the role of being the symbol of the country plus running the government. It is hard for anybody to carry that off. I think we're having a time in our history right now where people are disappointed in the political system, turned off by the political system, giving up on it or are wanting to hijack it with some ideological perspective. Therefore we need to enlist not just one person but kind of a consensus of leadership and citizenship to address that.

SPIEGEL: American society is polarized as never before. The French economist Thomas Piketty wrote a bestseller "Capital in the Twenty First Century" which is making a lot of noise right now. Have you had the chance to read it?

Clinton: I haven't read it yet. I've read very long essays about it and know what his principal point is. I think he makes a very strong case that we have unbalanced our economy too much towards favoring capital and away from labor. And I agree with his principal concern, which is that we have devalued labor. He talks about Europe, but it is the same thing in the United States.

SPIEGEL: Piketty argues that the growing gap between the rich and the poor is threatening democracy.

Clinton: I do agree with that. We've had this huge experiment known as America that was a diversity of populations, and we have held it together because we had a democracy that slowly over time included everybody. Even during the Great Depression people in the streets believed that they could make it and they would be better off. Now the relative wealth is much higher, but the disparity makes people believe that they're stuck. They no longer believe that things are going to get any better, no matter how hard they work. People have lost trust in each other and the political system and I think that's very threatening to democracy.

Clinton: Well, certainly, I can understand that, but that's never been the crux of the concern in our country, because we've always had people who did better than other people. That's just accepted. The problem is that people on the bottom and people in the middle class no longer feel like they have the opportunity to do better. The question is, how do we get back to having an economy that works for everybody and that once again gives people the optimism that they too will be successful.

Hillary Clinton on her family's finances: "We were deeply in debt."

SPIEGEL: According to your description of the United States, you should actually be applauded for your prosperity.

Clinton: Well, I think that if you go back and look at the last eight to 10 months, you'll see that people are seizing everything about me, and I accept that. I mean, that's part of being out in the public, out as a potential candidate, although I haven't made a decision.

SPIEGEL: You recently described your financial situation during the presidency of your husband Bill Clinton as dead broke.

Clinton: Well, when we came out of the White House, we were deeply in debt because of all the legal bills that we owed because of the relentless persecution of my husband and myself, and he had to work unbelievably hard to pay off every single penny of every debt we owed. And we did.

SPIEGEL: Today, you are multimillionaires. Your husband has earned $104 million with his speeches since 2001.

Clinton: We are very grateful for where we are today. But if you were to go back and look at the amount of money that we owed, we couldn't even get a mortgage on a house by ourselves. In our system he had to make double what he needed in order just to pay off the debt, and then to finance a house and continue to pay for our daughter's education.

Hillary Clinton on the possibility she will run for president again: "I haven't made up my mind."

SPIEGEL: Do you think it's a good system when you have to take such great personal and financial risks just in order to have a chance as a presidential candidate?

Clinton: Well, I don't think it is for me today. People running for president and even holding office are subjected to a full range of all kinds of attacks. If you want to be in politics in our country today, you go in with your eyes wide open about the potential price that you and your family might pay, and that's why you have to be very, very sure you not only want to do the job, but that you know what you want to do with the job, and you can deliver on that. Look at the recent Presidents: my husband, George W. Bush, Barack Obama. It's an incredibly stressful job. It ages a person. It takes a very thick skin to be able to do this job.

SPIEGEL: This all sounds like a vehement plea for your retirement.

Clinton: (Laughs) Well, I haven't made up my mind.

SPIEGEL: If you should decide to run for the presidency in 2016, your opponent could be Jeb Bush and he could quite possibly be the third Bush in the White House. Even his mother Barbara Bush has declared that she does not think it is a good idea. Do you agree?

Clinton: I think the point she was making is understandable, but I also think in our democracy, anybody can run for any reason. And his last name may factor into it. The color of his eyes might factor into it. His policies, I hope, factor into it.

SPIEGEL: A majority of people is glad that the Bush era is finally over. What kind of message would that send?

Clinton: Well, there will be plenty of time to comment on that if indeed an election were to involve somebody with that last name, but I am not going to say anything about it now.

SPIEGEL: For the past 25 years, there were two families that were very prominent in politics, your family and the Bush family. First George Bush was president for four years, then your husband led the country for eight years, and then George W. Bush was president for eight years. If either you or Jeb Bush were to win the election in 2016, once again a member of these two families would become president. Will the American democracy turn into a monarchy?

Clinton: We had two Roosevelts. We had two Adams. It may be that certain families just have a sense of commitment or even a predisposition to want to be in politics. I ran for president, as you remember. I lost to somebody named Barack Obama, so I don't think there is any guarantee in American politics. My last name did not help me in the end. Our system is open to everyone. It is not a monarchy in which I wake up in the morning and abdicate in favor of my son.

SPIEGEL: Would you like to see your daughter in politics?

Clinton: It is really up to her, and I'll support her in whatever she chooses.

Hillary Clinton on NSA whistleblower Edward Snowden: "He is a poor messenger."

SPIEGEL: We want to throw a couple of names out there and you tell us the first thought that comes to mind. Neymar, the Brazilian?

Clinton: Oh. Well, is he the one who got injured? How tragic that he'd be out when Brazil will be playing Germany. I watched some of the replay to try to see exactly what happened. It is a serious injury. I hope he comes back full speed. He's a great player.

Clinton: I think he made some very shrewd decisions in his choice of who is on the team. But I think he proved to be a very effective coach, and his coaching brought out the best in the players that he chose, and it helped to finally, I think, put what we call soccer and you call football on the map in the United States. So I give him a lot of credit for that.

Clinton: You know, I think he is a poor messenger for the message that he's trying to take credit for. He came into the National Security Agency apparently with the purpose of trying to gather a lot of information, and most of what he gathered had nothing to do with surveillance in the United States, but obviously around the world. And I think he could have provoked the debate in our country without stealing and distributing material that was government property and was of some consequence. And then for him to go first to China and then to Russia raises a lot of questions, but he is going to have to make his own choices. If he returns to the United States, he will certainly stand trial, but he will have an opportunity to speak out and to make his case in both a legal way and a public fashion.

SPIEGEL: We actually wanted to talk about your book and not about the NSA, but since it became known on Friday that a member of the German intelligence agency was arrested who had admitted that he acted as a spy for a US intelligence service, the issue of the NSA has gained a new dimension. Given the tense political climate, do you believe the CIA could seriously come up with idea of infiltrating German intelligence?

Clinton: Well, I know that your government is conducting a criminal investigation, and we will learn more as the facts are developed. And I know nothing other than what I read. But clearly, we have to do a much better job in working together between Germany and the United States to sort out what the appropriate lines of cooperation are on intelligence and security. I think the cooperation is necessary for our security, but we don't want to undermine it by raising doubts again and again. Clearly, the surveillance on Chancellor Merkel's phone was absolutely wrong. The president said that. I think that he made it very clear it was unacceptable. Where are the lines on both sides? That's what we have to work out.

SPIEGEL: Would you agree that acquiring a source within the German intelligence agency should be taboo for US intelligence services?

Clinton: I don't want to give a general answer. There's so much that goes on in intelligence circles. If we were to say no, under no circumstances, that you shouldn't do that to us, we shouldn't do that to you, what if a circumstance arises where it is conceivable that it would be in your interest and ours? The United States could never enter into a No-Spy agreement with any country -- not you, not Britain, not Canada. But that doesn't mean that within the intelligence and security institutions within our two countries, we shouldn't have a much clearer idea of what is appropriate and what should not be done.

SPIEGEL: Do you think Angela Merkel deserves an apology?

Clinton: Well, it is my understanding that the president and she have talked numerous times.

SPIEGEL: Yes, but no public apology.

Clinton: I'm not in the government anymore, but I'm sorry.