The men marching in formation are wearing white shirts and brown pants, their chests puffed out confidently. "One, two, three," shouts a voice over the loudspeakers as a marching band pounds their drums and the men swing bamboo rods. There are hundreds of them parading around the dusty ground in Nagpur, a city of 2.5 million in central India. They kick high into the air and yell - and when the leader rises out of his seat, they raise their arms over their chests in greeting, their heads upright.

The men belong to Rashtriya Swayamsevak Sangh (RSS), the largest volunteer organization in the world. They view themselves as patriots, but the group's critics consider it to be a militant movement that once revered Hitler and whose ideology played a role in the murder of Mahatma Gandhi by a Hindu extremist.

In early October, the RSS celebrated its 94th birthday. And just a couple of months later, the most severe unrest in recent Indian history broke out. Since then, hundreds of thousands of people have taken to the streets to protest the government, mostly peacefully. By the end of February, severe violence broke out in the northeast of Delhi. For three days, armed mobs roamed through the streets. It's mostly Muslims who seem to have been targeted. Mosques were set on fire, and journalists got attacked and only let go after proving their Hindu credentials. Fearful residents fled their homes.

A law regulating citizenship for outsiders initially triggered the demonstrations, but in fact, the country's very self-image is in question: What kind of nation does India want to be? A secular democracy, as demonstrators are demanding? Or a nation in which the Hindu majority wields power over minorities, as the RSS wants?

United by a Common Culture

India has a population of 1.37 billion people, including around 200 million Muslims. Hundreds of languages are spoken in the country and all the world's major religions are represented. The struggle for India's identity is as old as the country itself, but never before has the RSS been so close to achieving its goal.

Among the RSS-affiliated groups that make up the "Sangh Parivar," a whole network of Hindu nationalist organizations, is India's largest political party, the BJP and many private schools. Members include professors, bankers and cabinet ministers. Its most famous member, Narendra Modi, is the prime minister.

At RSS headquarters in Nagpur, chief ideologist J. Nandakumar describes the history of India as one of humiliation: Once upon a time the Indus Valley was populated by peaceful Hindus who knew little suffering – at least until Muslim Mughals invaded. The British colonial rulers who came later were hardly any better. After India's independence in 1947, a secular elite took power and ingratiated itself with the Muslim minority. Even Prime Minister Modi has spoken of India's "1,200 years of slavery."

The RSS has set itself the goal of restoring India to its supposed past glory. One of the group's former leaders once called the persecution of Jews in 1939 "a good lesson for us in Hindustan." Today, RSS high-ups would no longer say such things. The story they preach is of a society which -- despite all its diversity -- is united by a common culture.

But they do have one thing in common with Europe's right-wing extremists: They want to determine who gets to belong -- and who doesn't.

"Whether Hindu, Muslim or Christian, we all belong to the same Hindu family," says RSS ideologist Nandakumar. But there's one condition: "A Hindu is someone who considers this nation as his forefather’s land and respects the values that make this nation strong," he continues. Things get contentious when it comes to defining those values – and deciding who has to power to do so.

Nagpur is full of facilities operated by the RSS. There is a medical practice where a doctor treats slum residents once a week for just a few rupees per visit. There's a blood donation center and a new cancer clinic.

Over at the parade grounds, a boy is talking about why he enjoys being a part of the RSS, mentioning the games they play and the sense of community. He rattles off the names of a few fighters and kings who he says did great things for India. Not a single Muslim is among them.

The French political scientist Christophe Jaffrelot believes the RSS is less interested in politics but aims to shape Indian society for many years to come: It’s an organisation that doesn’t think in years, but in centuries.

After natural disasters like earthquakes or floods, RSS members are often the first on the scene, picking up the slack left behind by the government. This is especially true when it comes to education, with at least 5 million children attending RSS schools. That way, the RSS won't have to stage a coup or bribe anyone since one day their own people will take up the most important positions in the country anyway.

Narendra Modi was born the son of a tea merchant in Vadnagar, a small town in the western state of Gujarat. His parents arranged a marriage for him when he was still very young, but the married couple lived together only briefly. Modi dedicated his life to the RSS and studied political science. He had a knack for public speaking and was "lent out" to the political arm of the RSS, the BJP party. He rose quickly through the ranks and became the head of Gujarat's state government in 2001, a position he held for 13 years.

Those were decisive years for India. The economy grew and globalization made many people rich, but the rapid social change that came with it was overwhelming to many others. At the same time, the credibility of the Congress Party, which was in power at the time, was marred by corruption scandals.

When Modi ran as the leading candidate for the BJP in the 2014 election, he was seen as the right person at the right time. A man of the people who prefers speaking Hindi over English and is an unabashed proponent of Hinduism, he had governed a state whose economy grew faster than many others. The people trusted Modi to renew their country – and many of them chose to ignore his past.

The city of Ahmedabad in Gujarat looks quite modern, with a straightened river running through the center and separate lanes having been set aside for buses. But something is different compared to other Indian cities: There are far fewer mosques or people in Muslim dress to be seen. It's almost as if Islam doesn't exist here.

Members of the RSS community at a demonstration in Hyderabad

Eighteen years ago, Ahmedabad was the scene of one of India’s bloodiest riots. A train carrying Hindu pilgrims caught fire and Hindu extremists blamed Muslims for the blaze. Before long, Hindus and Muslims began slaughtering each other, with one politician getting cut apart with machetes and burned in the street. Within two months, at least 1,000 people had died. Most of the victims were Muslims.

Modi was head of the Gujarat government at the time. His critics accused him of allowing the violence to happen, though the Supreme Court of India found no evidence of Modi's complicity. The EU and the U.S. nevertheless imposed entry bans on him.

Today, nearly half of Ahmedabad's Muslim population lives in a ghetto near a garbage dump. There are fewer public schools here than in other parts of the city while roads and water supply are also poor. The progress that Modi so often boasts of remains out of reach for the city's Muslims.

For India's broader Muslim population, all of the prejudices they have been harboring against Modi since as far back as the Ahmedabad clashes seem to have been confirmed. Already in his first term as prime minister, a radical Hindu priest became head of government in the country's most populous state, Uttar Pradesh. The number of hate crimes against minorities has been rising since 2014 and journalists who report on these developments risk losing their jobs.

The job growth that was promised, however, has so far failed to materialize. Yet the BJP still won additional seats in parliament in last spring's election.

Chando Tanwar is sitting in front of her kiosk in a village in the state of Haryana in northern India, smoking a cigarette. She has placed a piece of cloth over her head and has a tattoo of a Hindu symbol on her hand. The BJP flag flies from a building behind her.

Almost three years ago, Hindu extremists lynched a dairy farmer in a neighboring Muslim village because he had allegedly taken cows to a slaughterhouse. Many Hindus consider cows to be sacred. Tanwar says the incident didn't surprise her. After all, slaughtering cows is a crime, she says.

Meanwhile, Modi’s government has followed a clear Hindu-nationalist agenda. He tapped Amit Shah, a Hindu hardliner who refers to Muslim immigrants as "termites," to be his interior minister.

Modi's administration also rescinded the autonomy of India's only Muslim-majority state, Jammu and Kashmir, last August. Thousands of additional troops have been deployed to the Kashmir Valley, where the internet has been mostly shut down for more than six months, the longest blackout in the history of any democracy.

Then, in December, the Indian parliament adopted a new citizenship law allowing for refugees from Pakistan, Bangladesh and Afghanistan who entered the country before 2014 to obtain citizenship more quickly. The law lists six religious communities in South Asia, with one exception: Muslims. Modi's government bills the move as a humanitarian act. What it cannot explain, however, is why only three countries are included. Why does it ignore the Rohingya in Myanmar, for instance, or the Uighurs in China?

What It Means to Be Indian

Critics say Modi's true aspiration is to define what it means to be Indian through religion. As part of a planned new civil register, all Indians are supposed to prove that their ancestors came from India. The government insists that the new register will help combat illegal immigration. In the state of Assam, nearly 2 million people have been unable to provide the requisite proof and are now at risk of becoming stateless. The government in Assam has started building detention camps.

The era of secularism in India is over, wrote Milan Vaishnav, a senior fellow at the Carnegie Endowment for International Peace and the director of its South Asia program, after the election last spring. It was no longer a question of whether India would adopt a Hindu identity, Vaishnav explained, but how exactly this would unfold.

Modi is betting that he can keep winning elections even without the support of the 14 percent of the country's population that is Muslim. In surveys, after all, a majority of Indians support Hindu nationalist demands. The protests, though, nevertheless pose a threat to Modi, particularly when it comes to his image abroad.

Modi denied in a speech that his government was erecting internment camps and accused the opposition and leftist intellectuals of spreading "lies and rumors" about him.

That is also how Tanwar, the Modi acolyte from Haryana, sees it. Modi she says, gave her a gas connection, increased her widow's pension and built her a toilet. Then she tells the story that everyone in the village knows: Twenty years ago, Muslims allegedly killed a Hindu man, whereupon the Hindus began setting Muslims on fire in revenge. When asked why Muslims didn't vote for Modi, she says: "Because Muslims are corrupt and Modi hunts down the corrupt." 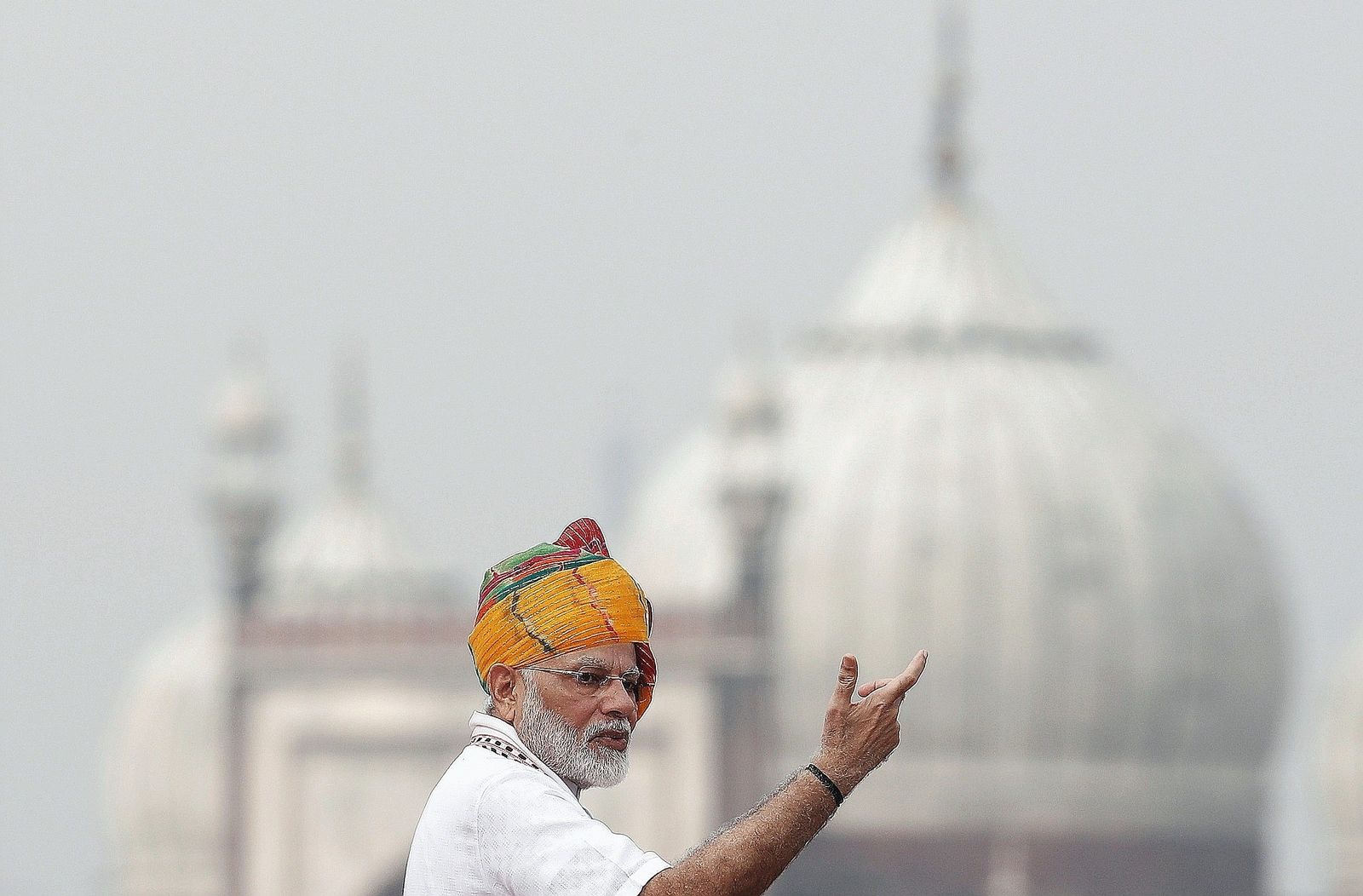 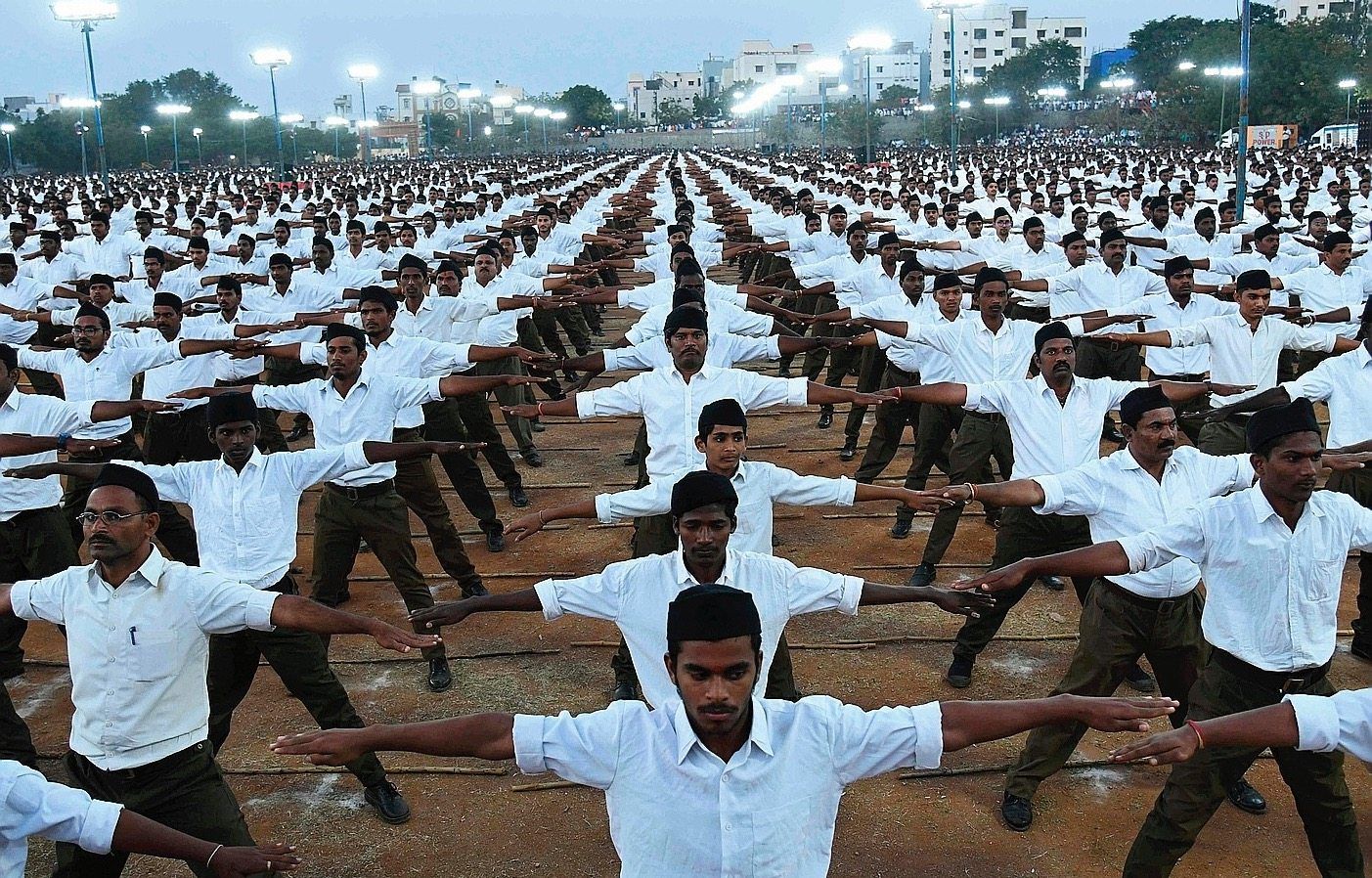 Members of the RSS community at a demonstration in Hyderabad