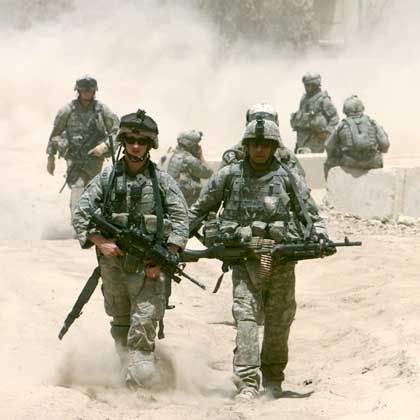 US soldiers in Iraq: "Some of the most acute criticisms made of the gross simplisms which have guided interventionist policies were produced within the American military."

SPIEGEL: The long awaited results of the "surge" are now in. Has the surge succeeded? Is there reason for optimism in Iraq?

KOLKO: Both United States General David H. Petraeus and US Ambassador Ryan C. Crocker will deliver "progress" reports to Congress on Monday, but the skeptics far outnumber those who believe Bushs strategy in Iraq is succeeding. They will say that Shiite attacks on Sunnis in Baghdad have fallen but they will not add that Baghdad has been largely purged in many areas of Sunni inhabitants and their flight much earlier -- and not the increase in Americans -- is the reason success can be reported to Congress. Indeed, most of the administrations statistics have been met with a wave a skepticism.

The Iraq military but especially the political benchmarks that this administration thought so crucial -- and used to justify its surge of 28,500 additional troops -- have, in the opinion of Congress Government Accountability Office (GAO) report issued at the end of August, not been attained (there are now 168,000 American troops in Iraq, plus roughly half as many civilians). In its unexpurgated, original form, the GAO claimed that only three of the 18 Congressionally mandated "benchmarks" had been reached: violence was as high as ever; reconstruction was plagued by corruption on both the Iraqi and American sides; the Shiites and Sunnis were as disunited as ever, murdering each other; crucial laws, especially on oil, have not been enacted yet; and probably many political changes will never occur, and the like. Of its nine security goals, only two had been met. White House and Pentagon efforts to soften GAO criticisms failed.

SPIEGEL: Who has benefited from the mess?

KOLKO: The situation is worse than ever and the artificial nation -- created after World War I in a capricious manner -- is breaking up. The surge, as one Iraqi is quoted, is isolating areas from each other ... and putting up permanent checkpoints. That is what I call a failure. The civilian death toll last August was higher than in February. Geopolitically, as Bush senior feared after the first Gulf war in 1990-91, Iran is emerging more powerful than ever, increasingly dominant in the region. The many official Israeli warnings before the war that this would be the outcome of war against Iraq and the removal of Saddam Hussein from power have come true.

SPIEGEL: How would you describe the situation of the Bush White House today? What options does it have?

KOLKO: The Bush Administration suffers from a fatal dilemma. Its Iraq adventure is getting steadily worse, the American people very likely will vote the Republicans out of office because of it, and the war is extremely expensive at a time that the economy is beginning to present it with a major problem. The presidents poll ratings are now the worst since 2001. Only 33 percent of the American public approve of his leadership and 58 percent want to decrease the number of American troops immediately or quickly. Fifty-five percent want legislation to set a withdrawal deadline. In Afghanistan, as well, the war against the Taliban is going badly, and the Bush Administrations dismal effort to use massive American military power to remake the world in a vague, inconsistent way is failing. The US has managed to increasingly alienate its former friends, who now fear its confusion and unpredictability. Above all, the American public is less ready than ever to tolerate Bushs idiosyncrasies.

SPIEGEL: What went wrong? Was the war doomed from the very beginning? How can the US military and the US government which is spending $3 billion per week in Iraq be losing the war?

KOLKO: The US is losing the wars in Iraq and Afghanistan for the very same reasons it lost all of its earlier conflicts. It has the manpower and firepower advantage, as always, but these are ultimately irrelevant in the medium- and long-run. They were irrelevant in many contexts in which the US was not involved, and they explain the outcome of many armed struggles over the past century regardless of who was in them, for they are usually decided by the socio-economic and political strength of the various sides -- China after 1947 and Vietnam after 1972 are two examples but scarcely the only ones. Wars are more determined by socio-economic and political factors than any other, and this was true long before the US attempted to regulate the world's affairs. Political conflicts are not solved by military interventions, and that they are often incapable of being resolved by political or peaceful means does not alter the fact that force is dysfunctional. This is truer today than ever with the spread of weapons technology. Washington refuses to heed this lesson of modern history.

SPIEGEL: What is the position of the US military? Are its forces united behind the war?

KOLKO: Some of the most acute criticisms made of the gross simplisms which have guided interventionist policies were produced within the American military, especially after the Vietnam experience traumatized it. My history of the Vietnam War was purchased by many base libraries, and the military journals treated it in detail and very respectfully. The statement at the end of July by the new chairman of the Joint Chiefs of Staff, Admiral Michael G. Mullen, that "no amount of troops in no amount of time will make much of a difference" if Iraqi politics fails to change drastically reflects a current of realism that has existed among military thinkers for some decades (whether he acts on this assumption is another matter and depends greatly on considerations outside of his control). But the senior military remains extremely disunited on this war, and many officers regard Gen. Petraeus -- the top military commander in Iraq -- as a political opportunist who ultimately will do as Bush commands.

Admiral William J. Fallon, who commands American forces in the region and is Petraeus superior, is publicly skeptical of his endorsement of the presidents policies in Iraq. The Army, especially, does not have the manpower for a protracted war and if the US maintains its troop levels after spring 2008, it will face a crisis. It will have to break its pledge not to leave soldiers in Iraq longer than 15 months, accelerate the use of National Guard units, and the like -- and it will lose the war regardless of what it does.

SPIEGEL: But if there are critical voices in the military, why are they ignored?

KOLKO: Like the CIA, the military has some acute strategic thinkers who have learned from bitter experiences. The analyses of the US Army's Strategic Studies Institute -- to name one of many -- are often very insightful and critical.

The problem, of course, is that few (if any) at the decisive levels pay any attention to the critical ruminations that the military and CIA consistently produce. There is no shortage of insight among US official analysts -- the problem that policy is rarely formulated with objective knowledge is a constraint on it. Ambitious people, who exist in ample quantity, say what their superiors wish to hear and rarely, if ever, contradict them. Former CIA head George Tenet is the supreme example of that, and what the CIA emphasized for the president or Donald Rumsfeld was essentially what they wanted to hear. While he admits the CIA knew far less regarding Iraq than it should have, Tenets recent memoir is a good example of desire leading reporting objectively. The men and women who rise to the top are finely tuned to the relationship between ambition and readiness to contradict their superiors with facts. The entire mess is Iraq, to cite just one example, was predicted. If reason and clarity prevailed, America's role in the world would be utterly different.

SPIEGEL: But what about the Iraqi security forces? Are they able to take over from the Americans?

KOLKO: The Iraqi army and police that are to replace the Americans is heavily infiltrated by Shiites loyal to Muqtada al-Sadr and others -- estimates vary, but at least a quarter is wholly unreliable. When Paul Bremer was sent as proconsul to Iraq in May 2003, he decided unilaterally to purge the military completely of Saddams officers and loyalists -- Bush still wanted, vaguely, to keep the existing army intact -- but the task of reconstructing it proved far too difficult for his successors. The American administration is now using the very Sunni tribes that Saddam had worked with, mainly by purchasing their loyalty. It is very significant that Bush during his visit to Iraq a few days ago went to Anbar province rather than Baghdad, reflecting the realization that Nouri al-Maliki's government is no longer the chosen vehicle for attaining Americas goals.

SPIEGEL: How does Washington plan to go about the business of ending the war?

KOLKO: There is utter confusion in Washington about how to end this morass. Goals are similar but the means to attain them are increasingly changing, confused, and as victory becomes more elusive so too does this administration look pathetic. The surge in the opinion of a majority of quite conservative Establishment foreign policy experts (80 percent of whom had once served in government) was failing; the administrations handling of the war, in their view, was dismal. In fact, it is disastrous.