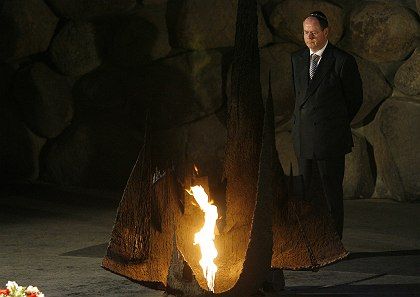 Germany is unwilling to revisit the 1952 Luxembourg Agreement, which set levels of compensation paid to Jewish Holocaust survivors. But the country may increase its support to survivors via the Jewish Claims Conference, according to comments made by German Finance Minister Peer Steinbrück in Israel on Thursday.

Meeting with Holocaust survivors near Tel Aviv, Steinbrück was responding to mounting pressure on Germany to increase payments, as aging survivors become increasingly reliant on state assistance programs in Israel. Most of Israel's roughly 250,000 Holocaust survivors are over 80. The fact that a quarter of them live in poverty has been the cause of protests in Israel in recent months.

Steinbrück emphasised that the German government is not willing to re-negotiate the terms of compensation. He referred to the ongoing validity of the Luxembourg Agreement, reached between Germany, Israel and the Jewish Claims Conference in 1952. The organisation had been founded the previous year with the goal of securing compensation and restitution for Holocaust survivors and their heirs.

Paying for Death and Suffering

Last week, in the first gesture of its kind, a senior German spokesmen indicated a willingness to discuss renegotiating pension payments to Holocaust survivors. Although Israel had made no formal request along these lines, the Minister for Pensioner Affairs, Rati Eitan, had been raising the issue frequently in interviews, pointing out that more than five decades ago, nobody could have foreseen today's high living costs and life expectancy -- nor the collapse of the Soviet Union, which resulted in a massive migration of Russian survivors to Israel.

Eitan has maintained that he doesn't want to re-negotiate the Luxemburg Agreement, but does want Germany and Israel to find a way to cover costs that were not anticipated at the time. The Israeli prime minister's office supports Eitan's position.

In a recent interview with the Frankfurter Rundschau, Noach Flug, chairman of the Organisation of Holocaust Survivors in Israel, said that the roughly €60 billion ($88 billion) compensation that Germany has paid thus far "stand in no relation" to the crimes of World War II. He said that with the payments, "Germany has built a nice house. But now there are a few holes in the roof that need to be repaired, so that it doesn't collapse."

Critics of Israel's pressure on Germany to raise its payments claim that Israel should be able to take care of its own. In October, the German Finance Ministry agreed to pay an additional $250 million over the next 10 years to the Jewish Claims Conference to help cover the needs of an additional 6,000 pensioners worldwide.