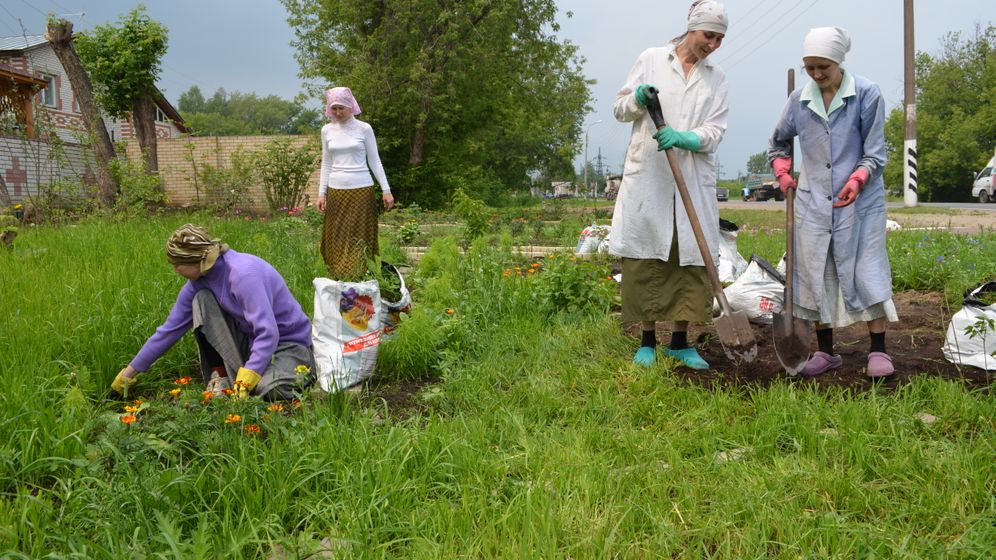 Haggard women hike up a hill near the Volga, saying they're following "the Law of Love." The law brings them to a three-story building made of white brick, with golden turrets and a battered gate. They call it the "Chapel of Russia's Resurrection." At the gate they exchange dusty boots for green plastic sandals before spreading out prayer rugs made of foam and pray to their patron saint: Vladimir Putin, Russia's prime minister and soon-to-be president (again). They believe he's a reincarnation of St. Paul.

The followers of this Russian Orthodox sect live in the village of Bolshaya Elnya, near Nizhny Novgorod, a metropolis 400 kilometers (about 250 miles) east of Moscow. Their leader is called "Mother Fotina," a 62-year-old matron who considers herself the reincarnation of Joan of Arc. "I proclaim what God has revealed to me," she says. Just as Saul persecuted Christians before his conversion to St. Paul, she believes Putin once beset the faithful as a Soviet KGB officer.

The Soviets blew up churches, or replaced them with swimming pools, but "when he became president," she says, "the Holy Ghost came to him." Since then Putin leads his flock "wisely, just as the Apostle did."

'We've Prayed for Him to Return'

Across Russia -- not just in Bolshaya Elnya -- popular affection for Putin has started turning to religious worship. The country's top rabbi, Berel Lasar, swooned a few months ago that Russians had "every reason to ask God to bless you. Every day and every hour you do good for any number of people, you save hundreds and thousands of worlds." Vladislav Surkow, the influential deputy chief of the Kremlin administration, sees in Putin "a man whom fate and the Lord sent to Russia."

In Putin's hometown of St. Petersburg, a proliferation of posters once showed the prime minister as an angel, with one hand extended, blessing the city's inhabitants. Putin's face was mounted on a photo of the cherubim crowning the city's Peter and Paul Cathedral. Any departure of Vladimir Putin from the national stage seems about as desirable to bureaucrats, conservative elites and a majority of the Russian people as a speedy advent of the Last Judgement.

"He has the spirit of a czar in him," says Mother Fotina, clad in a black robe and a white cap. Golden butterflies and cherubs adorn her homemade altar. Fotina swings a smoking censer before an icon of St. Paul-Putin. "Every day we've prayed for him to return to the Kremlin."

Their pleas, apparently, were heard. In an act of staged self-sacrifice last weekend, President Dmitry Medvedev recommended to a party congress that Putin should replace him as a presidential candidate -- and ultimately as president -- in 2012. The 11,000 delegates and party members of "United Russia" cheered like true believers in Moscow's Ice Palace, at what amounted to a Coronation Mass.

"The people's connection to Putin is more emotional than it is to average politicians," the venerable Russian historian Roy Mevedev (no relation to Dmitry) once said. "He's seen as a sort of moral leader." Polls show 57 percent of Russians notice "signs of a Putin cult" in the country; 52 percent believe it's a positive trend.

For almost four years, bureaucrats and Russian citizens listened to President Medvedev's speeches as he campaigned for tough reforms and tried to modernize the country. Privately, though, they seemed to trust that Putin would solve any problems by virtue of his aura -- even though government corruption has flowered for years and the country's dependence on commodity exports has risen.

Mother Fotina believes the people have no choice anyway. "God has appointed Putin to Russia to prepare for the coming of Jesus Christ," she says.

In Volgograd -- formerly Stalingrad -- Putin formed an electoral alliance with the menacing name of "Popular Front," hoping "to use people with fresh and interesting ideas." State enterprises like the Russian Post (400,000 employees) and railroads (one million) have declared their membership in the Popular Front. So has the "Russian agrarian movement," which supposedly unites Russia's 38 million rural residents, and an unknown number of participants in the "first all-Russian blondes meeting."

In Bolshaya Elyna, Mother Fotina spreads her arms. Born Svetlana Frolova, she sat for 21 months in jail during the 1990s, because she embezzled money from the state as a civil servant. After that she opened a "Center for Cosmo-Energetic Medicine," and later the "Temple of the Resurrection of Russia."

"Behold, the new Eve has come to earth," she declares, referring to herself. Her followers believe that Fontinja can heal by the laying-on of hands. They believe she can pray diseases like leukaemia away. For such services they sometimes hand her envelopes, labelled "For the Love."

The Orthodox Church accuses her of witchcraft. One reason is that she competes with the local church of "St. Nicholas the Miracle Worker" and alienates pious donors. "A few years ago the Orthodox Church put the state police (or FSB, a successor to the KGB) on her trail," a retired army officer in her neighborhood said. "After that, she started to praise Putin in public as a saint -- to protect herself from investigation."

As usual, in Putin's Russia, the story is mainly about money.