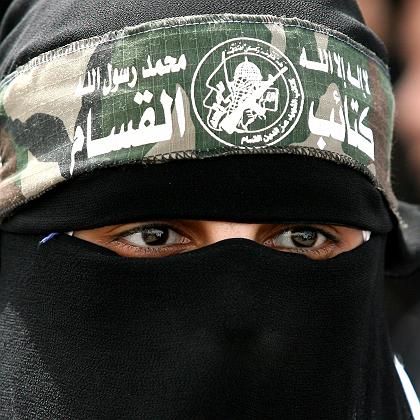 A female Hamas fighter: Hope for a cease-fire

It is now official: The cease-fire between Hamas and the Israelis will begin on Thursday, Israeli government spokesman Mark Regev confirmed on Wednesday morning in Jerusalem. The deal, brokered by Egypt in Cairo, will bring to an end more than a year of fighting between the Palestinian extremist group and the Israeli military in the Gaza Strip -- a conflict which has cost the lives of more than 400 Palestinians and seven Israelis. Should the agreement manage to bring the fighting to a stop, Israel could lift the blockade of the Gaza Strip as early as next week.

It is a moment the 1.4 million Gaza Strip residents have long been waiting for. For months, Palestinians there have been faced with empty store shelves and widespread shortages of everything from fuel to food. It will also mean an end to Israeli bombing runs and military activities in the densely populated region. Israelis, meanwhile, are hoping the deal will stop the steady stream of homemade rockets fired across the border -- though on Tuesday evening, after the deal was announced, yet more rockets sailed into Israel.

The negotiations have been underway for months. Finally, though, the Egyptian middlemen were able to find common ground between the two sides. It is an impressive success which saw Hamas move a long way from its original list of demands. In the beginning, for example, the extremist Islamist group wanted the cease-fire to also extend to the West Bank. There, moderate Palestinians with the Fatah movement under Palestinian President Mahmoud Abbas are in power -- and Israel has a free hand to hunt down Hamas terror cells. Securing the right to continue such searches was vital to the Israelis. The two sides agreed to leave the issue of the West Bank for future negotiations.

The climb-down on the part of Hamas shows that they are dependent on a cease-fire. Israel has sharply cut supplies to the Gaza Strip in reaction to the rockets which are regularly fired at the south of Israel from the Hamas-controlled territory. As a result, the 1.6 million inhabitants of the Gaza Strip are currently experiencing one of the territory's worst-ever crises. The harsh Israeli economic sanctions have now brought Hamas to their knees. In accordance with the international boycott which has been in effect since Hamas seized power one year ago, Israel only allows the Gaza Strip to receive just enough fuel, food, construction material and medicine that is necessary for people to survive -- but not enough, however, to make modern life possible.

Graphic: The Palestinian Territories at a glance (click to enlarge).

The Israeli government had been hoping that protests on the part of the Palestinian population against their catastrophic living conditions would be enough to bring about regime change -- in other words, to bring Hamas down. It's true that these hopes have not been fulfilled. But within the population there have been signs of resistance against the policies of Hamas which are bringing the Gaza Strip into ruin. According to Palestinian political scientist Mkhaimar Abu Sada from Al-Azhar University in the Gaza Strip, Hamas is using the crisis to win political capital for itself and to drive citizens to acts of desperation against Israel. "Hamas is putting the blame for the misery on Israel," he says. "But fewer and fewer Palestinians are convinced that that is the case."

After a year of being in control of the Gaza Strip, Hamas is now showing its statesman-like side. Hamas strategists hope that improving supplies to the territory will help to strengthen the Islamist group's standing among Palestinians -- which would then lead to a further consolidation of their position in the Gaza Strip. In the process, they want to resolve the internal split among Palestinians in their favor.

But it is precisely in this point that Hamas has to prove that it can push through its policies and that it is willing to use force against its Palestinian allies. It will soon become clear if Hamas will act to stop the various militant splinter groups in the Gaza Strip from breaking the cease-fire. That is set to be a difficult test. Some radical groups have already announced that Hamas' agreement to a cease-fire does not apply to them.

The stakes for Hamas are considerable. In the coming weeks, it will seek to push its agenda forward -- and not just on the militarily front, but most of all in terms of its political and social goals. One of its key aims is the Islamization of Palestinian society in Gaza.

Hamas won't have much time to do so, though, because Israel will be unwilling to accept any disruptions to the cease-fire, according to sources in the Defense Ministry. From Jerusalem's perspective, it is Hamas' responsibility to put an end to the rocket attacks. Israeli politicians and military officers are extremely skeptical that the cease-fire can hold.

Despite the lack of enthusiasm in Jerusalem, the Israelis have accepted the cease-fire. After all, a rejection of the "gentlemen's agreement" would have been a slap in the face for the Egyptian government, whose chief negotiators have served for months as middlemen between Israel and Hamas.

Israel also wants to prove that all the diplomatic options have been exhausted before it commences planned military operations in the Gaza Strip. Those operations are intended to put an end to the hail of rockets from within the Hamas-controlled territory -- assuming, of course, that the cease-fire does not hold.

Pierre Heumann is the Middle East correspondent for the Swiss newsweekly Weltwoche.