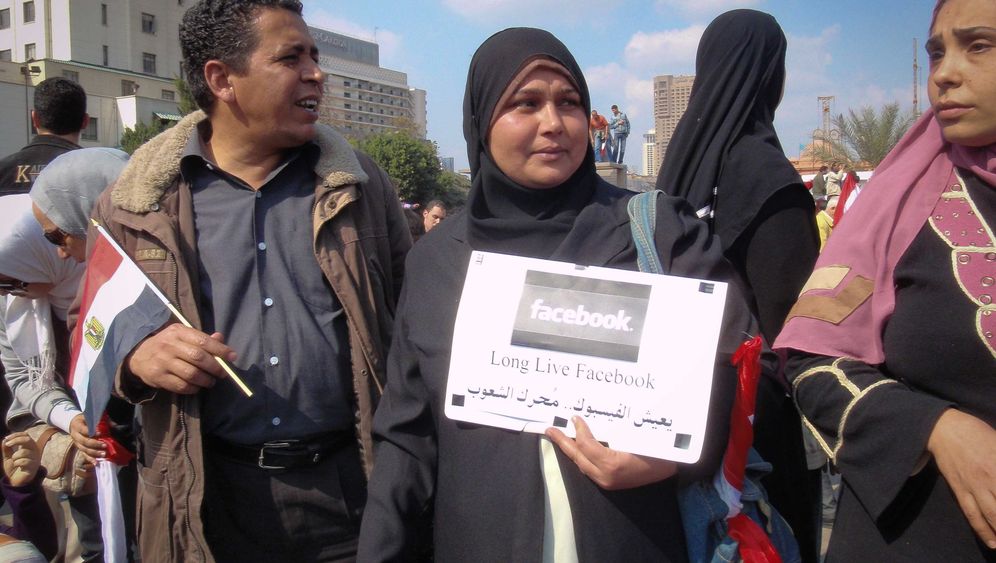 Before she describes how uniformed soldiers hit and kicked her and the other young women, ordering them to take off their clothes, lie on their backs in front of gawking soldiers and spread their legs so a man in a white lab coat could test their virginity -- before this, the hairdresser quickly lights a cigarette and pulls the smoke deeply into her lungs.

Salwa Husseini Gouda is a petite woman with gently curved lips and almond-shaped eyes. The 20-year-old looks tired this afternoon, wearing jeans and a headscarf together with a tight-fitting top. She smokes one cigarette after another. The air is heavy with shimmering heat and the Egyptian capital is dusty and loud, as always.

"I have no idea why they arrested me, of all people, in Tahrir Square," she says. "I was standing in front of a tank at that particular moment, maybe that's why." She attempts a grin. "Anyway, people should watch out for me -- I'm a dangerous criminal!"

According to eyewitness reports, men stormed Tahrir Square, center of the Egyptian revolution, on the afternoon of March 9 and attacked demonstrators seemingly at random. They weren't wearing uniforms. "They looked like thugs," Husseini Gouda says. "They called me a whore and hit me in the face." She says she was shocked when the group dragged her and around 20 other women into the Egyptian Museum and handed them over to the military. "I couldn't believe our army was behind this attack," Gouda continues. "But then they took us to a military prison, and from then on, it only got worse."

On the day Husseini Gouda was arrested, Hosni Mubarak, the country's deposed president, had been in self-imposed exile in the seaside resort of Sharm el-Sheik for nearly four weeks. A month before the arrest, the masses at Tahrir Square had cheered for the military, which took over power in the country after Mubarak resigned. "The people and the army are one," demonstrators shouted, dancing and celebrating in front of the tanks. Mothers pressed their babies into soldiers' arms for pictures. The world watched Egypt with amazement, seeing men and women, Muslims and Christians, fighting side by side for freedom. Then, 18 days later, the revolution was, the pharaoh chased off. The people were victorious. It was a triumph that belonged to women as well -- or so it seemed at the time.

When Husseini Gouda arrived at the military prison on March 9, she says she was led to a small room together with two other women. There they were forced to undress and allow their clothing to be searched. Then they noticed a soldier standing outside the open window, photographing them naked. "I was afraid they would use the pictures to make us look like prostitutes," Husseini Gouda says.

That night, the women were locked in a cell and given water and bread that stank of kerosene. The next day, they saw a stretcher in the hallway outside their cell. Here, an officer announced, a doctor would inspect the unmarried women for virginity. "We couldn't believe it," Husseini Gouda says. "We asked if it could at least be a female doctor, but he said no. One girl who tried to resist was plied with electroshocks."

Several human rights organizations are investigating the events that occurred at the military prison in Heikstep northeast of Cairo between March 9 and 13. Amnesty International has called on Egyptian authorities to "stop the shocking and degrading treatment of women protesters." The European Parliament denounced the "forced virginity tests" as torture.

Psychiatrist Mona Hamed, from El Nadeem Center for Rehabilitation of Victims of Violence, has documented statements from several of the women who were arrested on March 9, including Husseini Gouda. Hamed's conclusion: "What's new is that it isn't the police or the secret police behind this, but the military." The virginity tests, she says, send a message to the people, because the army wants to control citizens' freedom of movement. If a woman at a demonstration were beaten or arrested, Hamed says, her family would perhaps be able to accept that -- but not the charge that their daughter is a prostitute. "That's an unthinkable humiliation for the woman and her family," she explains.

Husseini Gouda didn't resist. The man in the white lab coat reached between her legs, and it didn't take long. He permitted her to cover herself with a blanket, to shield her from the gaze of the soldiers loitering in the hallway. "It was horribly humiliating," Husseini Gouda says. After the procedure, she continues, all of the women had to sign a form that stated whether they were virgins or not. But after the doctor confirmed that her hymen was intact, the soldiers confronted her with new accusations, Husseini Gouda says. Two days later, she was sentenced by a military court to one year of probation for the alleged possession of a weapon, property damage and violating curfew.

"The situation for women has deteriorated continually, these last few decades," says Hala Mustafa, 52, a political scientist and the editor-in-chief of the magazine al-Dimuqratiya. "On the one hand, this is because of political Islamization by the Muslim Brotherhood and the Salafists. On the other, it's because the regime too has done everything in its power to keep the people conservative, so they don't rebel."

Mustafa, with her light brown, layered haircut, pantsuit and white gold jewelry, is one of the country's liberal, progressive thinkers. She just canceled a trip abroad because she couldn't possibly miss what's happening in Egypt now, she says. For a moment, a smile appears on her face, the same smile worn by many Egyptians these days, a mixture of amazement and pride. It's too soon to make predictions, Mustafa says, but she's not particularly optimistic: "The old regime is still functioning."

Recently, the people's insubordination seems to be causing some confusion for the army. Human rights organizations say thousands of Egyptians have been imprisoned, tortured and brought before military courts in the last weeks. The military has restricted the public's rights to strike and to demonstrate, with emergency law and a curfew from 2 a.m. to 5 a.m. still in effect.

'They Weren't Virgins in the First Place'

Journalist Rasha Azeb, 28, has experienced the revolution firsthand from the beginning. She too was arrested on March 9 and taken to the Egyptian Museum. "We kept protesting after February 11, because we wanted to get rid of the whole regime, not just Mubarak," Azeb explains. She wears a ribbon around her neck from which a bullet casing dangles. You can say what you want now about Mubarak and the members of his government who have been arrested, Azeb says, "but not about the military council."

Azeb is sitting on a rooftop terrace in downtown Cairo, a sand-colored sea of houses below her stretching to the horizon. "The soldiers bound my hands and hit me," she says. "They said that the violence was increasing because of journalists. After four hours, they let me and my colleagues go." Azeb says she saw other women being hit and abused with electroshocks in the museum. She didn't find out until days later what happened to them afterward. It's intolerable, she says, and yet this isn't the moment to talk about sexual discrimination. "Right now it's about the Egyptian people's rights," Azeb believes, "not about men or women."

Still, the women among the freedom fighters in Tahrir Square also impressed the world precisely because they disproved a cliché. The World Economic Forum's Global Gender Gap Report, which evaluates gender equality in 134 countries, ranked Egypt 125th in 2010. Forty-two percent of Egyptian women can't read or write and most don't have a profession. Female genital mutilation has been outlawed since 1997, but is still widespread. Women out in the capital without a male chaperone must expect to be sexually harassed.

Last Tuesday, nearly three months after Husseini Gouda and the others were arrested, an army general finally issued a statement. "The girls who were detained were not like your daughter or mine," the general told American news channel CNN. "These were girls who had camped out in tents with mail protesters in Tahrir Square, and we found in the tents Molotov cocktails and (drugs)." The virginity tests, he said, were carried out so that the women couldn't claim afterward to have been harassed or raped in prison: "We wanted to show that they were not virgins in the first place."

Amnesty International called this reaction "an utterly perverse justification of a degrading form of abuse" and called on Egyptian authorities to hold the parties responsible accountable. The army's reply came promptly: The women's allegations, an army spokesperson announced, are unfounded.