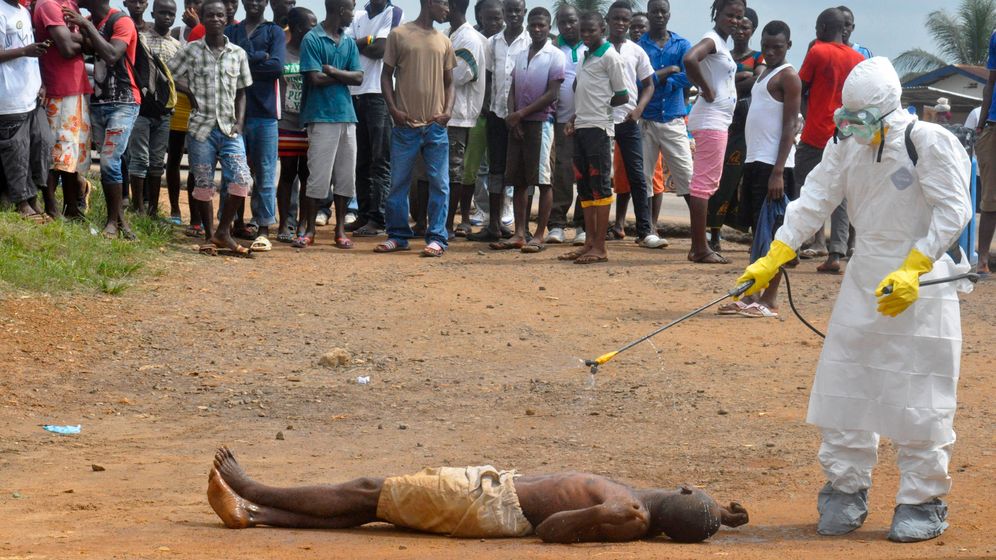 Kalashnikovs cost as little as $100 in Port Harcourt, says Helmut Lux, an orthopedist and trauma surgeon from the city of Neckarsulm, Germany. The machine gun is said to be the favorite weapon of gangs in the Nigerian city. And they are used in street fights almost every day. "If 100 people start firing at each other," Lux says, "around 10 die and five wind up on the operating table."

Lux came to the port city in oil-rich southern Nigeria two years ago and worked for the aid organization Doctors without Borders. He quickly learned that an AK-47 can rip large holes in a person's body.

Lux conducted operations day and night until overuse resulted in an inflamed tendon in his hand. "Without us, the people would have died like flies," he says. In theory, Port Harcourt does have a health care system, but it's not something that residents can afford.

'An Extremely Filthy and Broken City'

Despite having worked in Port-au-Prince after a devastating earthquake destroyed the Haitian capital in 2010, Lux was shocked by what he saw in Nigeria. "Port Harcourt is an extremely filthy and broken city," he says. "It's the gateway to hell." Now, the situation has become even worse. The city is threatened by Ebola.

By Friday, three people had died of the disease in Port Harcourt and more than 380 people were under observation due to possible infection. The 60 people with the highest risk of infection are currently under quarantine and 500 volunteers are measuring the temperature of the others twice each day and checking the state of their health. If a person starts to fall ill, then he or she is immediately quarantined to prevent further infection.

Even though the Nigerian authorities have responded correctly, it's in no way certain that they will succeed in halting the outbreak. "Everything will depend on whether all the contacts of the sick come out," says Oyewale Tomori, a professor for virology at Redeemer's University in western Nigeria and the rapporteur for the World Health Organization's Ebola Emergency Committee.

All the ingredients for a catastrophe are in place. Disease control experts are united in their fears that if the virus spreads to Lagos, a metropolis with millions of inhabitants and mass slums, the number of deaths in Nigeria could quickly eclipse the victim total in all of West Africa thus far.

"That would be a disaster for the people -- they wouldn't stand a chance," says Lux. If someone gets sick with Ebola, he explains, there's a high likelihood that person will be cast out by their family and that they will run away rather than report themselves to the authorities.

The World Health Organization has deployed 15 technical experts to Port Harcourt, and an Ebola emergency operations center and an isolation facility with 26 beds that can be expanded have been set up. WHO officials have warned that the security situation in the city is a serious problem and aid workers are only able to move around with a military escort.

This most recent outbreak got its start with a breathtaking act of negligence, one which destroyed hopes that the deadly epidemic could quickly be controlled in Africa's most populace country. An advisor to the Liberian Finance Ministry brought Ebola to Lagos and officials quickly identified and quarantined the people with whom he had contact. But one of them, the diplomat Olu-Ibukun Koye, managed to escape quarantine.

At the beginning of August, he secretly went to Port Harcourt, where he found a doctor willing to provide him with discreet treatment in a hotel. Koye survived and after he started feeling better a few days later, he returned to Lagos. By then, however, the doctor who had been treating him, Iyke Enemuo, had contracted the virus.

The doctor continued providing treatment to patients at his private clinic and also celebrated the birth of his new child at home with friends and family. Eventually he grew so sick he had to be taken to the hospital. He didn't tell the staff that he had provided treatment to a patient with Ebola. He also allowed members of his church to place their hands on him during a healing ritual.

Enemuo died on August 22, but not before infecting his wife, his younger sister and an elderly patient at the hospital where he had been treated. The patient has also since died. "We're very concerned," says Bernhard Fleischer, an expert at the Bernhard Nocht Institute for Tropical Medicine in Hamburg, the largest research facility of its type in Germany.

Are Official Ebola Estimates too Low?

The situation is already bad enough in the other countries that have been hit by the disease, including Sierra Leone, Liberia and Guinea. Now WHO officials have conceded that the official count of 4,000 Ebola cases and 2,100 deaths is likely far too low.

In an action plan presented by the organization in August, officials estimate there will be 20,000 infections before the current epidemic ends. Officials at Doctors without Borders are even more pessimistic. "If something doesn't happen quickly," says Joanne Liu, the international president of the organization, "the number of infected could grow tenfold in the next three months."

Some 200 experts from around the world gathered in Geneva last week for a conference on Ebola organized by WHO. At the meeting, they concluded it would take until November before the first vaccine or medicines for treating Ebola can be delivered and administered as part of studies in the affected regions.

"Six months into the worst Ebola epidemic in history, the world is losing the battle to contain it," Liu said in a speech to the United Nations last week. UN Secretary-General Ban Ki-moon himself chimed in on Friday, saying it was an "international rescue call" for the global community.

A Closing Window of Opportunity

Liu and virtually all disease control experts agree that the only thing that can be done is for industrialized nations to intervene directly to halt the spread. "There is a window of opportunity to tamp this down, but that window is closing," says Tom Frieden the director of the Centers for Disease Control in the United States. "We know how to stop Ebola. The challenge is to scale up to the massive levels needed to stop this outbreak."

Most needed are experts familiar with biohazards who don't need basic training in such simple matters as how to use protective clothing. People are also needed who can quickly set up makeshift hospitals using basic materials. Supplies and logistical support are also required.

Doctors without Borders' Liu noted that many countries have invested heavily in biological threat response. "You have a political and humanitarian responsibility to immediately utilize these capabilities in Ebola-affected countries," she said. Liu says she is speaking about this with representatives of numerous governments at the moment. "I'm downright begging them for support, but it's almost as if I am starving and the only thing being offered to me is a small appetizer," she says.

In Germany, a government action committee convened a meeting on Friday to address the outbreak. Officials at the Foreign Ministry in Berlin are working closely together with experts from Germany's Robert Koch center for disease control and the Bernhard Nocht Institute for Tropical Medicine. But so far, only €1.1 million ($1.42 million) has been disbursed to aid organizations. The German Development Ministry then added another million euros for immediate on-site relief in Africa.

Additional aid did come from the European Union, which increased its relief from €12 to €144 million. Still, money is no substitute for highly trained aid workers and logistical support. "Why isn't a country like Germany doing more," asks Lui. "Why, for example, isn't there a functioning airlift?"

There is a discussion in Berlin about whether the Bundeswehr, Germany's armed forces, could help the affected countries with transport flights. But there are no concrete plans and officials at the Defense Ministry say no serious consideration has been given to the idea of a logistical support mission.

From an operational perspective, however, Ebola is a significant concern for the German military, which has had troops active in several African countries for months now. The Bundeswehr's training mission in Mali has provided considerable cause for concern given that the country shares its borders with nations already hit by the epidemic, including Guinea.

The Bundeswehr has since developed an emergency plan for its areas of deployment that includes five levels of action describing medical measures and stipulating what soldiers should do in the event of infections. Experts from Germany could also be flown in to provide support.

The swift spread of Ebola in Nigeria has left many wondering if the disease might ultimately find its way to Germany or other parts of the world by way of air travel. And given the situation in Nigeria, that eventuality can no longer be ruled out. With the latest cases in Nigeria, "the situation has clearly been aggravated again," says Florian Steiner, an Ebola expert at Berlin's Charité university hospital. He notes that the densely populated country has a major international airport. "There's considerable poverty, but also a very rich upper class," he says. He adds that people are more educated and more mobile than those in Sierre Leone or Guinea and that they can afford airfare.

"That means that the risk of someone flying in who has been infected has increased considerably," Steiner says. "We are very well equipped in Germany, but at the same time we don't have unlimited capacity."

Joanne Lui is convinced that the best way to protect Germany and Europe from Ebola is to halt the disease in its current location. She's also trying to convince other countries around the world of the same. "To put out this fire, we must run into the burning building." 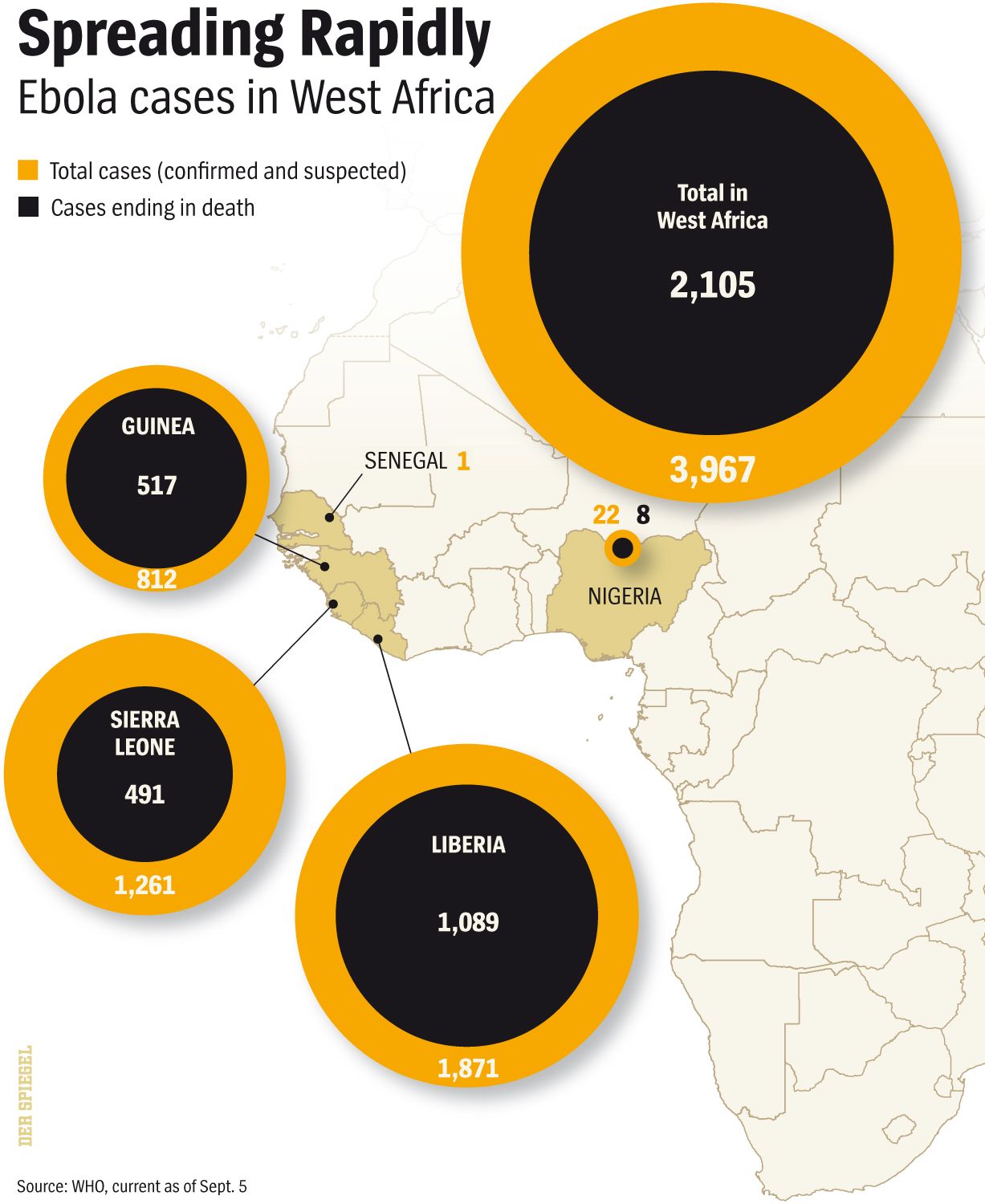