So, how did he ultimately manage to secure a deal with Donald Trump that nobody had thought possible? Jean-Claude Juncker found himself sitting in an unadorned meeting room at a Washington think tank, where he reflected on the hours he had just spent at the White House. He appeared visibly exhausted, but was in a buoyant mood. "I did it," he said.

He had spent more than two hours negotiating with Trump before finally reaching an agreement that was greeted with relief both in the European Union and the United States. Trump has now said he will not impose punitive tariffs on European cars -- at least for the time being. In exchange, the Europeans have expressed a willingness to buy more liquefied petroleum gas and soybeans from the U.S. and, among other things, discuss how tariffs on other goods can be abolished. The president has agreed there will be no further tariffs, Juncker announced proudly, and that existing tariffs on cars would not be increased.

Of course, it's still too early to tell how long that agreement will hold. Many fear all it would take is one nasty tweet from Trump for the whole thing to come unspun again. And then comes the fact that the deal does nothing to solve the many other problems the Europeans have with this unpredictable American president. The man who, for now at least, seems prepared to call a kind of cease-fire in the trade conflict, but still wants to abolish NATO, threatens Iran and dismisses climate change as nonsense largely promulgated by Europeans.

A Cease-Fire in the Trade War

And yet it proved to be Juncker, of all people, who managed to tackle what Angela Merkel and Emmanuel Macron have both failed to achieve -- rein Trump in. An escalation of the trade war, which would have threatened as many as 15 million jobs on both sides of the Atlantic and depressed global gross domestic product by many hundreds of billions of euros, is off the table for the time being. German Foreign Minister Heiko Maas, clearly pleased, said Trump's supporters had apparently registered that it is also "the farmers in the Midwest and workers in the Rust Belt who would stand to lose" in such a trade war.

Juncker had been the subject of mockery and ridicule just before his trip to Washington. Videos showing Juncker staggering on his way to dinner at the NATO summit in mid-July and having to be propped up by other EU leaders to keep him from falling were being circulated. Right-wing populists all across Europe have been amused by the images of a purportedly drunk European Commission president. Juncker has claimed he had trouble walking that day due to back problems and a sciatica attack. The question many were asking in Brussels prior to his Washington trip was not whether Juncker could produce tangible results, but whether he was in any condition to take such an arduous journey.

No one expected him to come back with a deal with Trump in his hands. And why should they have? Even as recently as the NATO summit in mid-July, the U.S. president had assured EU leaders in a highly personal manner that punitive tariffs on European cars were definitely coming -- and that they could be expected before November's midterm congressional elections in the U.S., which he has described as the "most important thing" to him.

But then a man who had barely been on the Europeans' radar intervened -- Trump economic adviser Larry Kudlow, who first joined the president's team in the White House this spring. After months of war metaphors coming out of the White House, the former TV anchor from New Jersey deliberately talked down the conflict. After little to no progress with Commerce Secretary Wilbur Ross and U.S. Trade Representative Robert Lighthizer, the Europeans tried their luck with Kudlow.

One day before his meeting with Trump, Juncker sent Martin Selmayr, the European Commission's general secretary, to meet with Kudlow. The two drafted a few paragraphs at a hotel in Washington they could agree upon. These were the cornerstones of the deal that would later emerge.

European Commission President Jean-Claude Juncker and U.S. President Donald Trump as they announce a deal to work toward zero tariffs in Washington on Wednesday.

When he arrived at the White House on Wednesday afternoon, Juncker still didn't know whether this plan was also liked by the president. It's a familiar pattern with Trump. In the end, he often follows the advice of the last adviser he has met with. For the Europeans, this raised the question of whether that person this time was economic adviser Kudlow or a hardliner like Commerce Secretary Ross.

European Commissioner for Trade Cecilia Malmström had spoken that morning to her U.S. counterpart, Lighthizer, but she had not been provided with any clarity. On the contrary: The Juncker team had the feeling Trump's trade representative had been unaware of the Kudlow paper.

No More than A Pledge

Talks in the Oval Office proceeded quickly for the first 40 minutes, and it was only after other people joined that the atmosphere got frostier. Trump's trade team under Lighthizer and Ross insisted the Europeans take further steps to open up their agricultural market. But Juncker held back, arguing the Europeans didn't want a repeat of the debates that accompanied the first failed negotiations aimed at creating a free trade deal between the EU and the U.S., including the squabbles over so-called chlorine chicken and genetically modified foods.

In the end, the Americans received no more than the pledge the EU would buy more soybeans in the future, a gesture Trump immediately touted to the press as a great victory for farmers in the Midwest.

The media echo created by Trump's meeting with Vladimir Putin in Helsinki had also been disastrous in the U.S. And his own supporters are beginning to suffer as a result of the trade conflicts with China and the EU. The tariffs imposed by Brussels as a countermeasure to Trump's punitive levies on European steel, such as those slapped on motorcycles, bourbon-whiskey and peanut butter, have had an effect. Unsellable agricultural products have started to pile up in the country's cold-storage warehouses, and talk of job cuts has also already begun. The pressure felt by the affected companies was immediately passed on to Trump and other Republican politicians.

Juncker also managed to establish a rapport with the unpredictable president at their recent meetings. In his speeches, Juncker made selective use of exactly the kind of soundbites Trump likes to use, like, "liquid gas" for example or "soybeans." He also used simple, pictorial messages that took into consideration Trump's notoriously short attention span. At the G-7 summit in Canada at the beginning of June, rather than rattling on about how essential the trans-Atlantic relationship is, Juncker told Trump about his father, who had been forcibly recruited by the Wehrmacht and liberated from a camp by the Americans after World War II.

Ultimately, the outcome of the Washington meeting turned out to be a victory for moderates in the EU over those urging a hardline trade policy against the U.S., especially in France. Shortly before Juncker's visit, French Finance Minister Bruno Le Maire had declared: "We're in the midst of a trade war." He refused to discuss any reduction in levies until the U.S. withdrew its punitive tariffs. "We refuse to negotiate with a gun pointed to our heads," he recently said.

But the French were unable to prevail with their hardline course because most other EU countries had shifted to the German position, particularly those with a strong automotive industry -- Italy, Spain, Sweden and Poland, and, later, the Czech Republic and Slovakia. Accordingly, the French call for further clarification is likely to simply fizzle out.

The Europeans adopted the old "flexible response" NATO doctrine, which calls for a variety of responses to attacks by opponents. During the Cold War, that meant retaliating in a reasonable manner in the event of an enemy attack, while leaving the door cracked open for talks and negotiations. The doctrine was conceived by American generals, and now it has brought the Europeans success.

A Coup for Juncker

Juncker has also emerged as a clear winner. Until recently, many considered the European Commission president to be the very embodiment of the crisis gripping the EU. Juncker proved unable to prevent Brexit or counter the advance of the right-wing populists across Europe. He had also become the source of irritation in Germany, where people felt he sided too often with Southern European countries and had been annoyed by his repeated claims that Berlin's insistence other EU countries adhere to the rules and contracts were some kind of German quirk. But doubts about whether Juncker is still fit for his job have dissipated -- at least for time being.

For Juncker, this week's developments come as a relief, because it's very possible the commission president will remain in office significantly longer than originally thought. EU leaders are expected to begin looking for a new commission president following elections for the European Parliament next spring. Juncker himself has said he has no plans to be considered for another term.

But many in Brussels are expecting an unclear outcome in parliamentary elections, which could make it difficult for EU leaders to agree on a common candidate to head the European Commission, which is the EU's executive body. Juncker would have to continue as commission president until they could find an acceptable successor, meaning he would have to continue the trade talks agreed to with Trump.

According to the plan, working groups will address the issues, but no deal is expected before the upcoming U.S. midterm congressional elections. And any serious negotiations would not commence until the commission has been provided with a mandate to do so by the member states and the European Parliament. And it is precisely within that EU body that the deal with Washington is expected to face the greatest scrutiny. "No deal will be made under pressure and there will be no shooting from the hip," said Bernd Lange of the center-left Social Democratic Party, who chairs the International Trade Committee in the European Parliament. "Illegal protectionist tariffs need to be eliminated for good," he said.

The experts focused on the details in Washington while Trump and Juncker themselves handled the PR work. As their advisers continued working on the text, Trump offered to Juncker in private that he would announce the deal as being a big thing. Indeed, it was anything but a given that the U.S. president would give such a show of solidarity in the famous White House Rose Garden.

But Juncker was also happy for the high-profile announcement -- because he needed the images back home. Let's go out and talk to the journalists, Trump said to him. And so they marched out to do so. 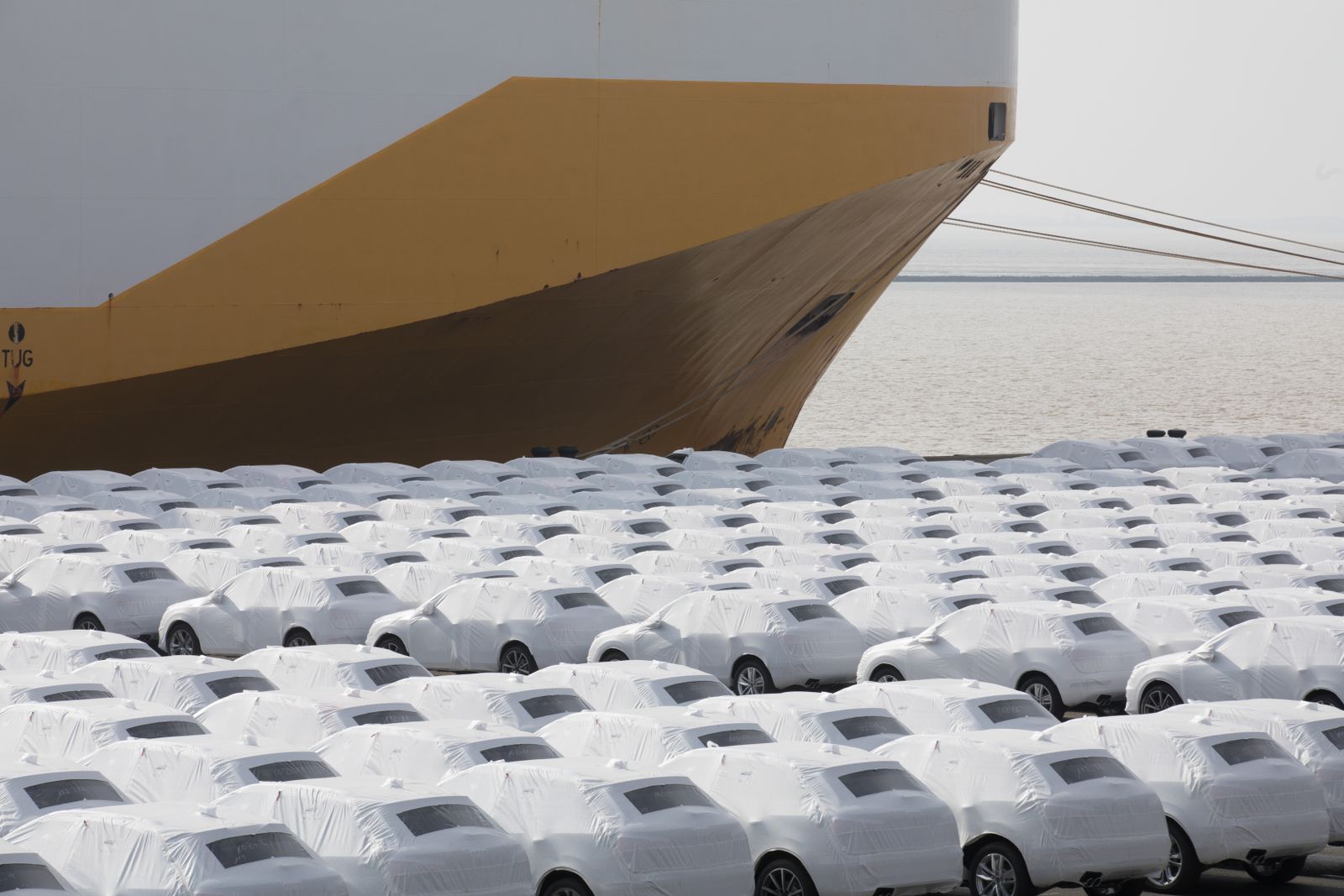 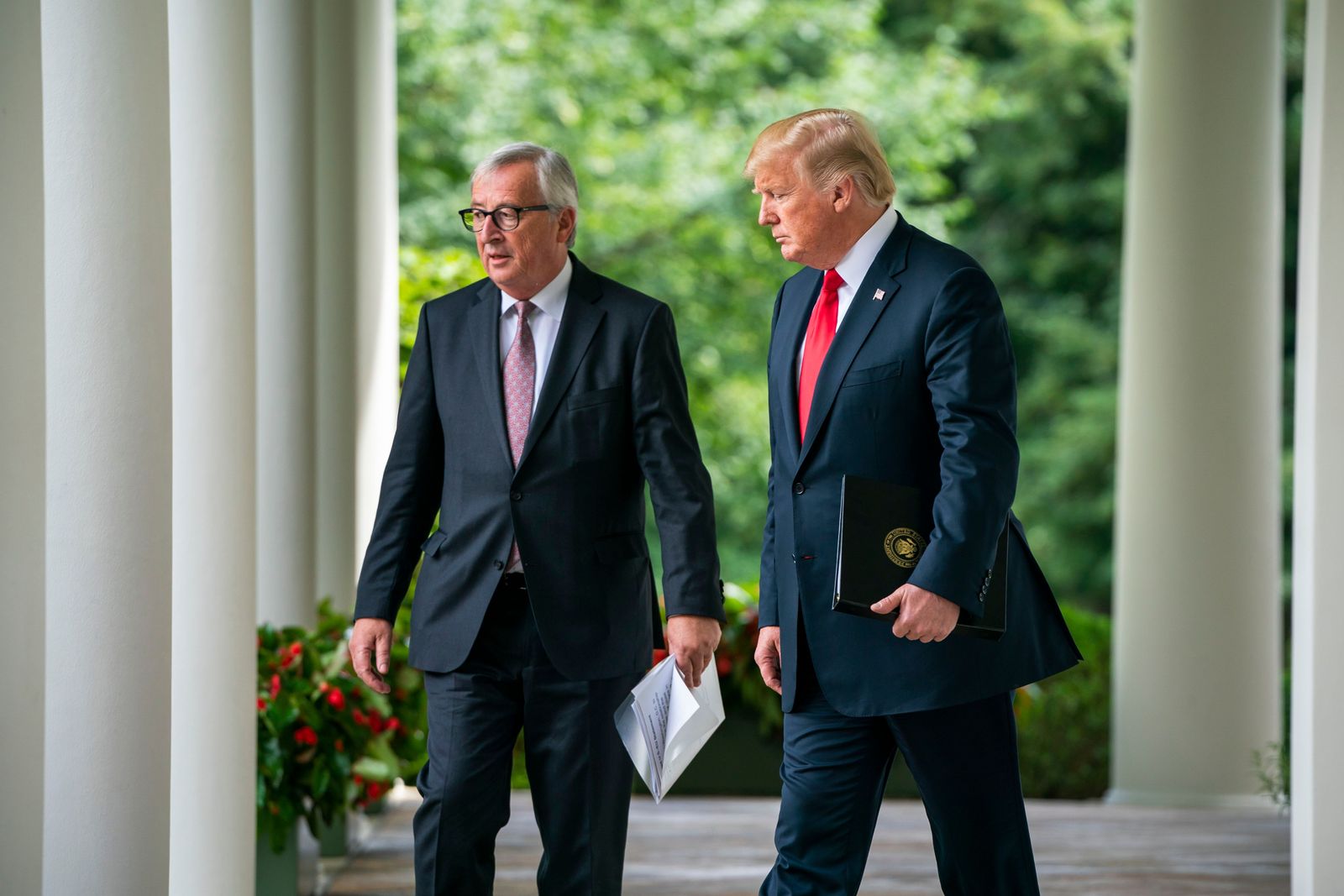 European Commission President Jean-Claude Juncker and U.S. President Donald Trump as they announce a deal to work toward zero tariffs in Washington on Wednesday.