Islamic State fighters have conquered Rahabi in Iraq. They control the Libyan coast near Sirt. In Syria, they just lost Tall Abyad to the Kurds, but are spreading out in the center of Palmyra. Thomas van Linge is keeping an eye on their movements. The 19-year-old wears a hoodie and, although he only just graduated from high school, he already knows better than most people where the Jihadists are heading, which areas they are occupying and where they've been beaten back. That's because van Linge makes some of the world's best maps of chaotic war zones from the desk of his childhood bedroom in Amsterdam. He has never been to Syria, Iraq or Libya, and he learned Arabic on YouTube.

The young Dutchman isn't just keeping an eye on Islamic State and its "caliphate," he also knows what the rebels of the Free Syrian Army, al-Nusra Front and Lebanon's Hezbollah are doing. In Libya he's monitoring the Zintan Brigades, in Nigeria he's watching Boko Haram, in Eastern Ukraine he's keeping an eye on the separatists. "All places where people are rising up," he says.

His maps have been used by CNN, the New York Times and even SPIEGEL. The question is: Why is a 19-year-old interested in the situation at Syrian front lines? And how does he manage to depict these conflicts so precisely, with more details than almost any other professional cartographer?

Thomas van Linge still lives at home, in a small house near Schiphol Airport, where Star Wars DVDs line the shelves. When he looks out the window, he can see hazelnut bushes and a slide in his front yard. He shrugs with his shoulders -- he has no answer to the question. He's a practical person and believes that everyone should just do what interests them. Afraid of failing at something? No, he says. He claims not to know that feeling.

At school he did theater. He learned the anthroposophical movement art known as eurythmy and completed an internship in a home for senior citizens. He has collected money for species in danger of extinction and memorized the names of all the birds and mammals of central Europe. He attended a school called the Free School, a Waldorf institution where lessons follow the principles of Rudolf Steiner. One of the ideas of these progressive educators is that students shouldn't only be made to learn how to think and feel, but also how to want -- i.e., how to do things.

Moving into the Real World

One evening four years ago, van Linge saw a show on CNN about the Arab Spring in Egypt. He saw furious young people fighting for their freedom on Tahrir Square in Cairo. His mother is a psychologist, his father an economist, and they raised him to be a free thinker who views the world as a place of promise. He says he often wished that others were as free as him.

So he selected the Syrian civil war as the subject for his specialized work at school. He looked up a map of Syria on Google and began inputting front lines and rebel groups. He used different colors. He established contact with activists and gained their trust. They, in turn, sent him information. Then he continued tinkering with the map. In January 2014, he released it for the first time on his Twitter account, @arabthomness. Now he has over 14,000 followers from around the world. He regularly updates the maps.

A flood of information flows together on his mobile phone from Twitter, Facebook and YouTube. He Skypes with fighters on the front, corresponds with activists and charities and even gets messages from other cartographers. In all, he claims to use over 1,100 sources for his Syrian maps.

Now that he is finished with high school, van Linge has been doing a lot of thinking about what he should do next. He says he's like to work freelance, be outside and travel. During his research he learned about a young Syrian whose parents died. She now needs to take care of her little sister alone. Thomas van Linge often thinks about the two. He knows, he says, that his maps don't help the girls.

That has inspired him to think about traveling to one of the places soon he so far has only known from his maps -- possibly into the Kurdish region in northeastern Iraq. He believes he's spent enough time monitoring the situation from afar. He feels that it's now time for him to help people where their suffering is actually taking place. 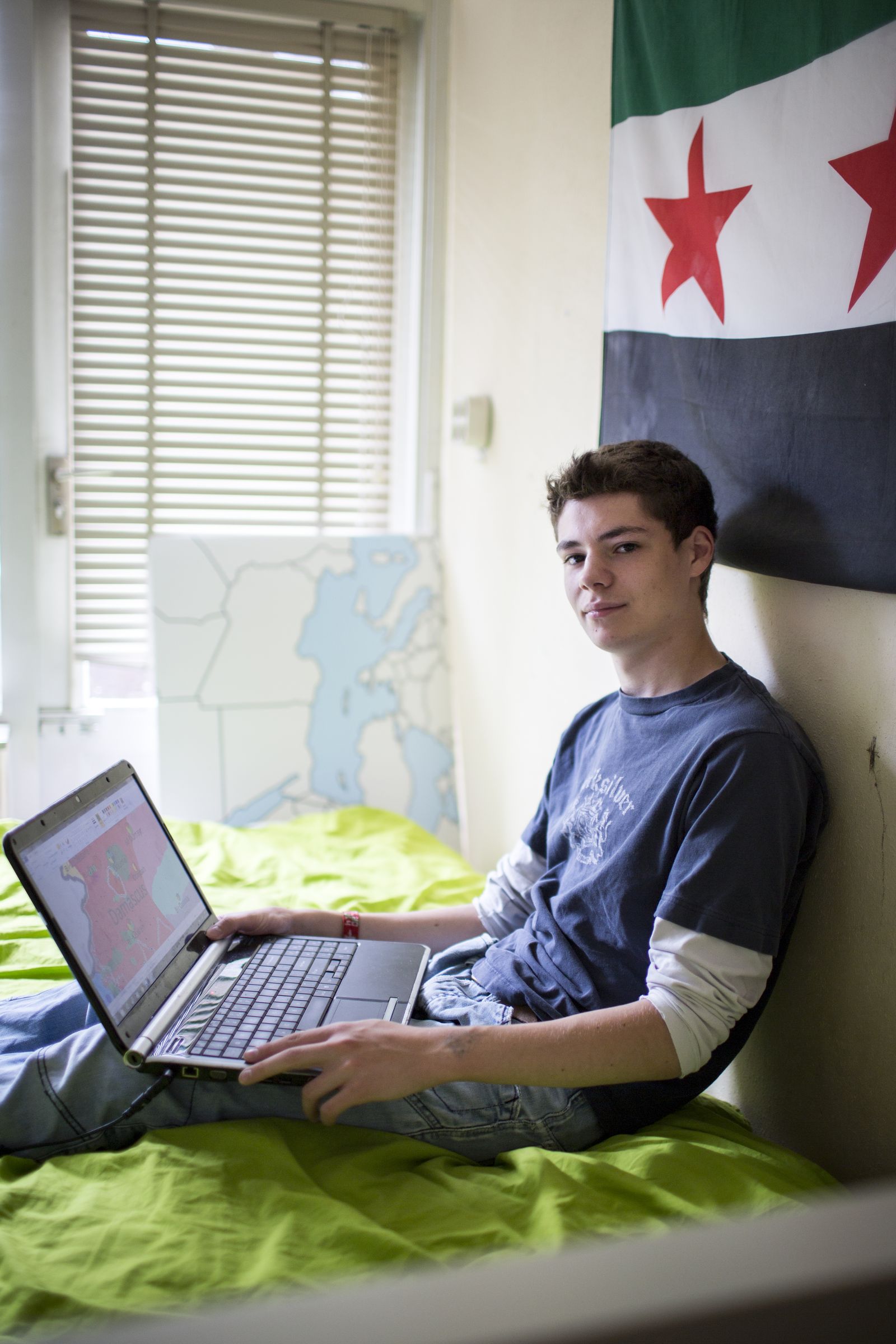 Thomas van Linge is a 19-year-old Dutch cartographer and activist.