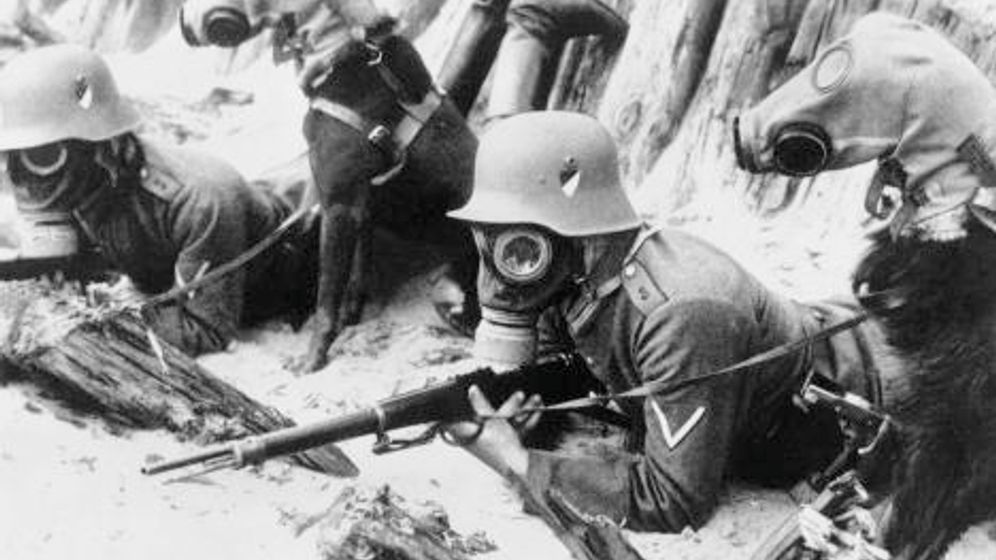 Photo Gallery: The Birth of Weapons of Mass Destruction

The man who would go down in history as the father of chemical warfare acted as his own guinea pig to test his invention. On April 2, 1915, Fritz Haber, the head of Berlin's Kaiser Wilhelm Institute of Physical Chemistry, rode through a yellow-green cloud of chlorine gas on grounds used for troop exercises.

The experiment was successful. The scientist, himself a war enthusiast, began coughing convulsively; he grew pale and had to be carried away on a stretcher.

About three weeks later, German troops used chlorine gas for the first time on a mass scale during combat on the Western Front near the Flemish city of Ypres in Belgium, deploying a total of 150 tons of the substance. At first, French soldiers thought the shimmering cloud was intended as a diversionary tactic. But then, suddenly, they began flailing about with their hands in the air as they gasped for breath and collapsed on the ground. As many as 1,200 were killed and 3,000 wounded. Haber observed the event from a safe distance.

The Birth of Weapons of Mass Destruction

In military history, the deployment of chlorine gas in Ypres is considered the moment when weapons of mass destruction were born, and the rapid development of additional chemical weapons ensued. It was a development that revolutionized warfare and has manifested itself in many ways: from the use of toxic defoliants like Agent Orange in the Vietnam War to the more recent poison gas attacks in the Syrian civil war.

The use of chemical weapons in Flanders was the result of military desperation. The German army's initial invasion had already devolved into stationary trench warfare by the end of 1914 and was running out of munitions.

All sides were looking for a way to break through enemy lines at the time and they spent billions on the search. The result was an unprecedented advance in technology. Researchers invented mobile radio telephones, engineers constructed cannons capable of firing shells as far as 120 kilometers (74.5 miles) and fighter planes were flown into battle zones for the first time ever.

Even a century after Ypres, armed conflicts continue to spur technological advances. Wherever wars are fought, money flows into military innovations. The United States' War on Terror, for example, resulted in the addition of billions to the defense budget and also led to the development of killer drones and vastly complex surveillance technologies.

A Preparedness to Invest

Prior to World War I, German politicians and generals had rejected a number of defense projects, but the conflagration of violence that enveloped Europe in 1914 triggered a flood of investment. One example was the flamethrower, which had already been patented by a Berlin engineer all the way back in 1901. But it was first deployed on a large scale during the course of the war, in the February 1916 battle at Verdun. The jet of fire had a range of 35 meters (115 feet).

The tank also developed quickly during the Great War, though the allies were in the lead. In 1906, Austrian Kaiser Franz Joseph I had declared the Austro-Daimler armored vehicle to be useless. Just 10 years later, the British rolled with their tanks into the Battle of the Somme. The Central Powers followed up much too late and developed their own tanks.

During the war years, the military budget of the German Reich grew by 505 percent, and the technical advances weren't by any means restricted to weapons. The telephone, for example, became the most important means of communication during World War I. On average, each army corps received 5,000 calls a day. By 1917, the German army had installed a 920,000-kilometer (571,000 mile) long network of cables for its field telephones. The fact that the lines could easily be cut in trench warfare promoted the deployment of radio equipment. The world's first "mobile phones" weighed 50 kilograms (110 pounds).

Each side reacted swiftly to progress made by the other. At the beginning of the war, aircraft squadrons were primarily used to conduct surveillance on the front. But 1915 proved to be a watershed moment. French fighter pilot Roland Garos installed a machine gun on his Morane-Saulnier monoplane. In response, the Germans developed the Fokker fighter plane, which included synchronization gear that enabled it to fire in the direction of flight through the arc of its spinning propeller without hitting the blades.

The Allies initially responded with outrage to the Germans' deployment of chlorine gas in Flanders, calling it a barbaric act. But they, too, began to deploy poison gas beginning in September 1915. All told, the parties to the conflict used 112,000 tons of chemical weapons between 1914 and 1918.

Fritz Haber, the father of the poison gas war, got promoted to the rank of captain as a result of the Germans' successful attack near Ypres. It was reported that he responded to the promotion with tears of joy.