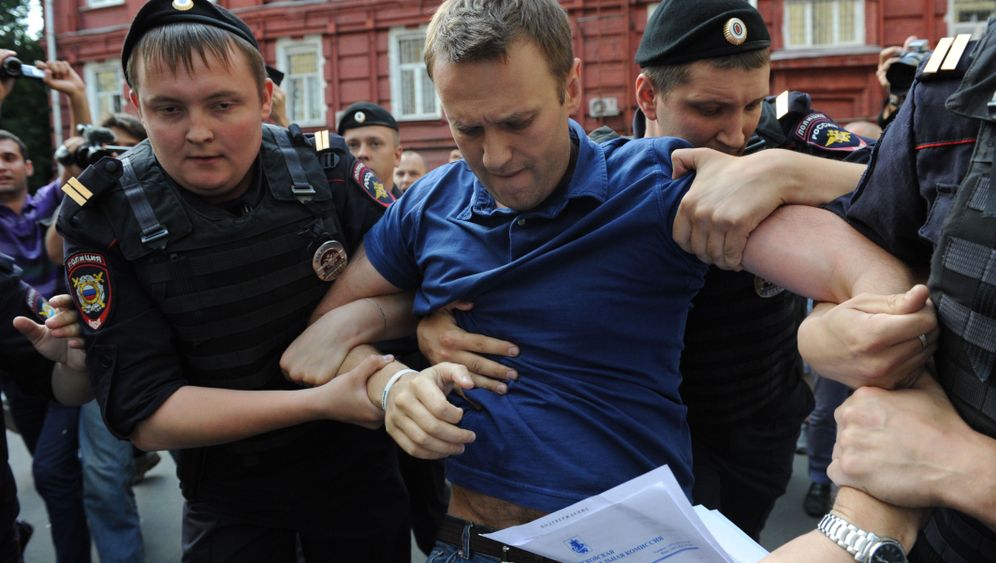 Alexei Navalny made his name as a blogger and anti-corruption activist before becoming the most prominent figure in the protest movement against Russian President Vladimir Putin. But now Navalny is 37 years old, and he is already facing the end of his political career. If a court in the provincial Russian town of Kirov finds him guilty this Thursday, he cannot, by Russian law, run for public office.

The charge is embezzlement. Navalny was an adviser to the liberal governor of Kirov in 2009. The prosecution accuses him of abusing his position and enriching himself through the sale of wood from publicly owned forest. Officially, he is accused of stealing 16 million rubles, equivalent to approximately €400,000 ($528,000).

Lyudmila Alexeyeva, 85, is a historian, civil rights activist and long-time icon of the Russian opposition. In a conversation with SPIEGEL ONLINE, she explains why the Kremlin wants to muzzle Navalny.

SPIEGEL ONLINE: Are the accusations, that Navalny defrauded €400,000 from the state when he was an adviser to a governor, true?

Alexeyeva: There is no proof of it. It is all a political trial meant to end Navalny's political career.

SPIEGEL ONLINE: What punishment do you expect?

Alexeyeva: In Russia, less than one percent of trials end with an acquittal. With trials that were initiated for political reasons those chances are zero. The state prosecutor is calling for six years in prison. If Navalny is lucky, the penalty will be reduced to probation. I hate it when people are wrongly convicted.

SPIEGEL ONLINE: What odds does he have in the Moscow mayoral race in September? Polls put him at 8 percent.

Alexeyeva: After all, former Deputy Prime Minister Boris Nemtsov, who is currently the leader of the opposition, got 13 percent in Sochi, the host city of the winter Olympics, two years ago despite the fact that the entire state apparatus was against him and numerous obstacles were placed in his path. But even if Navalny appeals, the state will probably pass a legally binding sentence quickly. Then he wouldn't be able to run for any position. Eight percent is not so bad, by the way, once you realize all of the state media are against him.

SPIEGEL ONLINE: Could Navalny's popularity grow while he is in prison?

Alexeyeva: That's what happened with magnate Mikhail Khodorkovsky. He was merely an oligarch in the minds of most Russians, but his imprisonment in a labor camp turned him into a martyr with a positive image. In Russia, we have a long tradition of compassion for people who have been put into labor camps or prison. If Navalny is convicted it would show that the Kremlin and Putin haven't learned anything from the Khodorkovsky case.

Alexeyeva: Since his return to the Kremlin, systematically into a police state.

SPIEGEL ONLINE: How should the West react if Navalny is convicted?

Alexeyeva: It should think of its own interests. What would it be like to have a kind of Soviet Union as a neighbor once again? Here, we do what we can. I am proud that no non-governmental organization submitted to the Kremlin's demand that it identify itself as a foreign agent if it receives foreign money. I find that heroic.

SPIEGEL ONLINE: When Navalny announces that he would put Putin and his associates behind bars as soon as he were to come to power, is that the right path for the opposition or is he just provoking a strong reaction from the Kremlin?

Alexeyeva: I can understand Navalny. There are many people around Putin and his rulers who, as a result of their place in the sun, became billionaires. Maybe it would be best to send them out of the country with their billions. Russia wouldn't be any worse off. On the contrary! It is important to avoid worsening the situation. Way too much blood has been spilled in our country in revolutions and civil wars.

SPIEGEL ONLINE: Will Putin and his crew ever stop the repression?

Alexeyeva: It makes me think of Napoleon, who once said something to the effect that he is more afraid of stupid opponents than of smart ones, because he can better calculate what the smart ones will do. The Kremlin is incalculable.

Interview conducted by Matthias Schepp and Claudia Thaler in Moscow