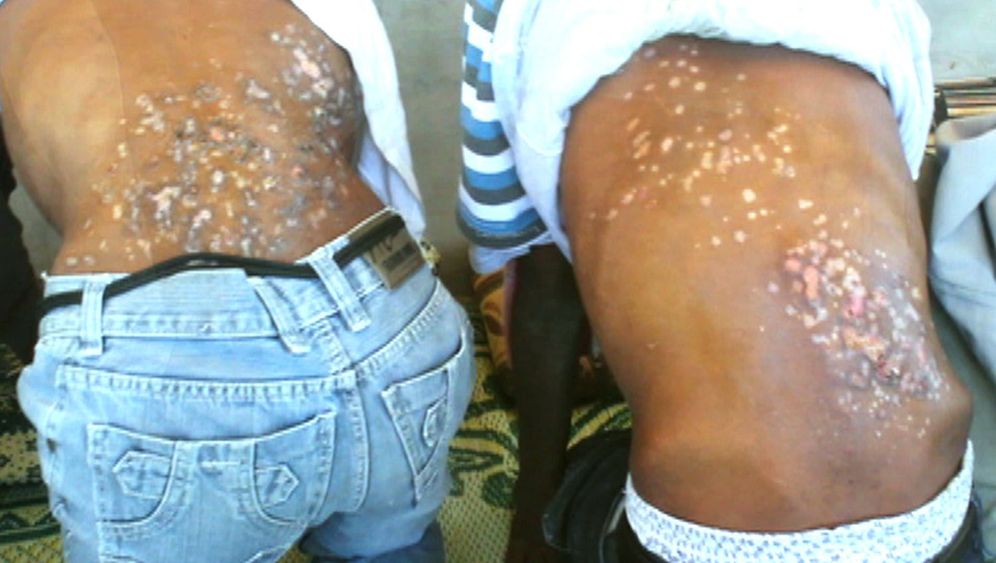 Five people fled at night under the cover of heavy wind. Gusts were whipping fiercely against the hut they had been chained in. Their guard seemed to be sleeping, and the storm raged so loudly that they were able to use a rock to smash their chains without waking him. One by one, they slithered on their sides through a gap in the wall and out to freedom. "We wanted to either escape or die," says Zeae, a 27-year-old man from Eritrea.

The five of them were barefoot and had only a few scraps of clothing on their emaciated bodies, which were covered with burns and scars. "We saw lights in the distance," Zeae says. But two of the men were too weak to walk. They stayed behind, lying there in the desert, because the others were too weak to help them. It was hard enough just dragging their own bodies forward.

In the end, two young men and one girl reached the first of the houses they had seen. When a Bedouin opened the door, Zeae says, "I thought it was about to start all over again" -- the beatings, the torture, the rape.

The Sinai Peninsula, which connects Egypt and Israel, has become a place of suffering and death for thousands of refugees from sub-Saharan Africa, from Eritrea, Somalia or Sudan. They come in search of a better life in Israel or Europe, but many of them end up kidnapped, imprisoned and tortured. Criminals among the Bedouins living here demand ransom from the victims' families back home. They often torture their prisoners to death. The government in Cairo, meanwhile, seems to ignore these brutal crimes.

Trapped in a Lawless Land

Since the revolution that upended power structures in Egypt, the northern part of the Sinai Peninsula has slipped further out of the country's political control. It has become a lawless region and a hotbed of criminals and terrorists. Groups of young men armed with AK-47s loiter in the streets. The business of human trafficking is booming, and the murder rate has skyrocketed.

"There are no police here," says Sheikh Mohammed, a young, bearded Bedouin leader. Sinai is run by family clans that follow their own rules.

Sheikh Mohammed is one of the Bedouins who reject the brutal trade in refugees. Still, he explains, "I can't free them. No one can interfere in another clan's affairs." Doing so could spark a bloody feud between clans. "I can only help the Africans if they escape on their own," he says.

The morning after their escape found the three Eritreans sitting in a hut on Sheikh Mohammed's property. The Bedouin whose house they first approached brought them here at around 6 a.m., and they were given jackets and blankets. Glowing coals smolder in a metal drum sunk into the sand, and a pan of rice and chicken sits next to it. But the refugees can't eat much. Their bodies are repeatedly racked by tremors, and they often simply bury their heads between their bony knees and cry.

"We had barely anything to eat or drink. And we weren't allowed to sleep. If we did, they burned us," explains Mhretab, 27. "They scorched the skin on our arms or backs with burning plastic, or they burned us directly with lighters." He points to a long scar on his neck. "They hung us from our feet and hit us. If we cried, they called our families and we had to beg them over the phone to pay for us."

The three Eritreans were held against their will in Sinai for over a year. First, they say, human traffickers imprisoned them for months in an underground room. Then, they were moved to the hut in the desert. "There were 22 of us at first," Zeae says. "Ten of us died in the cellar."

They say their families transferred ransoms amounting to about $30,000 (€23,000) per prisoner. But instead of releasing the hostages, the kidnappers passed them on to other human traffickers. "My parents don't have anything else to give," Zeae says. "They sold their land and all their animals. They took up a collection for me at church." In fact, it often happens that entire communities pool their money to pay a refugee's ransom.

Lemlem, an emaciated 15-year-old girl with bloodshot eyes, sits in a corner wearing the giant sweater she was given when she arrived. Zeae explains that Lemlem was raped repeatedly: "They simply came and took her away, any time, whenever they wanted." Lemlem rarely says a word. The only time she does, it's to ask if the reporter could find her a pair of underwear.

The stories of these three refugees are like hundreds of other ones collected by Human Rights Watch. Certain elements come up again and again in the reports -- electric shocks, rape, sleep deprivation and being tortured with burning plastic that is sometimes even inserted in the vagina or anus. Videos taken by a local photographer show refugees with deep flesh wounds crawling with flies and infected, badly swollen limbs.

The New York Times estimates that 7,000 refugees have been abused in this way over the last four years, and that 4,000 of them may have died. These figures are drawn from data provided by aid organizations in Israel, Europe and the United States. Locals often find the dead bodies of African refugees who have simply been dumped in the desert or whose limbs can be seen sticking out of the sand.

In the darkness between the city of el-Arish and the border town of Rafah lies a low building with no electricity. Only a few candles provide light inside, where the room is lined with carpets. A stocky young man in a light-gray quilted jacket sits in one corner. He introduces himself as Mahmoud. He is a human trafficker.

"We keep them here until we have the money from their families," he says.

Just three days ago, he says, he released another group of Africans to people smugglers who will take them over the border into Israel. He has been in this business since 2009. But life here, he says, has gotten more difficult.

At mosques in Sinai, respected local figures such as Sheikh Mohammed decry the behavior of traffickers like Mahmoud, denouncing their crimes against the defenseless as un-Islamic. People no longer greet Mahmoud on the street, and he says he fears for his life.

"But what else am I supposed to do?" Mahmoud asks. "There are no jobs here, there's no way to make money!"

Then he kneels down in a corner to pray.

The ransom for a refugee from sub-Saharan Africa can now run as high as $50,000. And, in the last 20 months, an alarming new trend has developed: Many refugees end up in Israel who didn't actually want to go there. Bedouins from the Rashaida tribe kidnap these people in Sudan, sometimes even abducting them from refugee camps, then hand them over to clans in Sinai. Refugees report that this takes place in cooperation with Sudanese border police.

"As soon as the ransom for one person is paid, they immediately take their next hostage," says Mohammed Bakr, manager of a local NGO in North Sinai. Bakr says the only solution he can see is to inform people while they're still in their home countries about the dangers of trying to escape through Sinai.

Once these refugees are kidnapped in Sinai, they find themselves in a situation that is as hopeless as it is harrowing. Even if they do survive and are eventually released by their captors, they're left to wander in the no man's land near the Israeli border. If they cross the border, they risk being shot. If they make it into Israel, they may be arrested. If the Egyptian police catch them before they cross, they'll be locked up at police stations in Sinai and held in heinous conditions before eventually being deported back to their home countries.

The Egyptian government refuses to let the United Nations High Commissioner for Refugees (UNHCR) visit these prisons. It claims that the people being held in them are economic refugees who have no right to asylum because they are in Sinai illegally.

"Egypt is breaking international refugee law," says Mohammed Dairi from the UNHCR's Cairo office. His organization is the body that determines the status of refugees, he says, adding that many of the refugees from Eritrea and Somalia qualify for asylum because they are threatened with persecution and torture in their home countries.

In its ignorance over these crimes against sub-Saharan African refugees, Egypt is breaking its own laws, which expressly forbid human trafficking. Smugglers of tomatoes or potatoes are regularly arrested in Egypt, yet not a single human trafficker has been prosecuted. The government in Cairo has generally justified its inaction by citing security concerns.

Since August, President Mohammed Morsi's government has been expanding its military presence in Sinai -- but to fight Islamist terrorists rather than free innocent refugees. Egyptian journalist Lina Attalah from the Egypt Independent, an English-language weekly, criticizes her government for its failure to act and its indifferent attitude. "Some tribesmen tell us that security forces are underequipped and can easily be beaten by the military prowess of the traffickers," she wrote in November 2012. "But they also direct us to a more poignant fact speaking to a profound racism: the victims don't matter. They are Africans. They are refugees and migrants." She also points out that there isn't any powerful organization looking out for the refugees' interests.

Mohammed Bakr, from the NGO in North Sinai, likewise has serious doubts about his government's willingness to intervene. "They simply don't want to recognize this problem," he says. Bakr is certain the traffickers bribe border police to let them smuggle refugees into Sinai. He believes the police and military know precisely who the traffickers are and where they hide their prisoners. "But they do nothing about it," he says, "even though that's their job."

Still, the flood of refugees entering Sinai has slowed in recent months because of the many new checkpoints that have sprung up as a result of the increased military presence. "Unfortunately, that doesn't solve the problem," says Dairi, from the UNHCR. "The traffickers simply find different routes. We know of refugees who are now being held in Aswan" -- a city in southern Egypt.

It's believed there are around 1,000 African refugees currently being held in captivity in Sinai.

Zeae, Lemlem and Mhretab managed to escape their torturers, but they are still waiting in Sheikh Mohammed's hut in Sinai, their future uncertain. Their hope is that the sheikh will smuggle them to Cairo and turn them over to an aid organization.

"And then I want to go to Europe," Mhretab says. "I want to work very hard and pay my family back all the money."