A garbage bag and some clothes. That's all she was able to pack when she fled. "I didn't have access to my suitcases, and I had to be quick. My madame was only out for a moment," says the 27-year-old from Ghana, for whom we've chosen the alias Vanessa to protect her identity. She is relating the story of the evening in late 2019 when she escaped her tormentors in Lebanon. Her getaway taxi was waiting outside.

Vanessa spent four months with a Lebanese family in the coastal town of Byblos, she says. "I had to sleep on an air mattress in the living room. I was only given one meal a day." Soon she was cleaning not just the house, but also the company's offices too. "I worked from 6 in the morning until 10 at night, seven days a week. I was as skinny as an invalid and in constant pain." Instead of the agreed-upon $300 (266 euros), she only received $200 a month. "And in the end, they didn't even pay that," she says.

Vanessa is sitting in a dark room in a noisy apartment complex along a coastal highway. She shares a stuffy room with two other African women who also escaped the kafala system. DER SPIEGEL has met with several people who have suffered through the system, including Vanessa. Their descriptions of what they were forced to endure are plausible and correspond with the findings of experts and aid organizations regarding the kafala system, though they cannot be verified in detail.

Kafala is Arabic for sponsorship. Migrant workers are recruited in their home countries to work for Lebanese families, either directly or through agencies. "The system is under-regulated and opaque," says Zeina Mezher of the International Labor Organization (ILO), a sub-organization of the UN.

That which was promised in the person's home country may be null and void in Lebanon, including details pertaining to salary, duration of employment, working hours and more. In all cases, the sponsor (kafil) must cover the recruitment costs, which usually include travel, agency fees, residence and work permits, the employment contract, preliminary medical tests and insurance. In addition, the kafil is also responsible for providing room and board. The sponsor bears full financial responsibility and the state plays no role at all.

The Sponsor Has All the Power

As a consequence, migrant workers fall into a state of dependence. It's all but impossible to sue for unpaid wages and workers are unable to switch employers or extend their stay without the sponsor's permission. In many cases, they're not even allowed to leave the house without asking. "Their entire personal and social lives are regulated by the sponsor, or, at least, there are no set rules to prevent this," Mezher says.

Non-governmental organizations like Amnesty International estimate that more than 250,000 foreigners live within Lebanon's kafala system, or around 8 percent of the country's working population.

The system originated in the Gulf states, according to Nasser Yassin, a migration researcher at the American University of Beirut. "The concept comes from the culture of the Arab tribes, though it has been applied on a large scale in the Gulf because the small population there is dependent on expats."

In recent months, though, the Lebanese economy has collapsed. The Lebanese pound has lost more than 60 percent of its value and dollars are all but impossible to come by in the country anymore. The coronavirus crisis has accelerated that collapse and has brought the injustices of the kafala system to the forefront.

"You Can Only Make Money as a Sex Worker"

After her escape, Vanessa first found shelter in an apartment with other African women in a poor district of Beirut. One of them had a Lebanese boyfriend. "He said: 'There are no more jobs. You can only make money as a sex worker.' Then he took pictures of me, and soon I met my first customer," says Vanessa.

Her parents died early, says the 27-year-old. "I came to Lebanon to earn money for my three little brothers and sisters," Vanessa explains, "but, of course, not like this. The intermediary in Ghana said the money would be decent, that I would get time off, that the Lebanese are good people."

Vanessa soon left the Beirut apartment and says she's been living with two other women in a one-room apartment near the highway for a few months now. Her roommates don't know that she still earns her money through prostitution. "I am ashamed, but what can I do? Nobody can afford a cleaning lady anymore. All that's left is sex. I have to survive after all."

Vanessa says she has saved the equivalent of around $150. She would need roughly $700 to leave Lebanon, for fees and a ticket. Once the only airport reopens, that is, though it's unclear when that might be. "The embassy will get my passport for me," she believes. Her papers are still with her sponsors in Byblos, another feature of the kafala system.

Many Lebanese try to get rid of their migrant workers. In April, a man put his Nigerian migrant worker up "for sale" in a Facebook group for $1,000. "She's 30 years old, active and very clean," he wrote. He was later arrested on suspicion of human trafficking.

Others simply drop their workers off in front of their countries' embassies. The worst scene is in front of the Ethiopian embassy in Beirut. The area is crowded with hundreds of women, some of whom end up waiting a week without food or access to sanitary facilities, only to be told that the diplomats can't help them either. The embassy announced on Facebook that it would not cover the cost of return travel.

"Many of these women suffer from severe trauma," says one aid worker from the organization This is Lebanon. Farah Salka of the Anti-Racism Movement calls the kafala system "modern-day slavery." According to Lebanese authorities, two female migrant workers were dying every week even before the crisis in Lebanon started to worsen. They say that many commit suicide or are killed while trying to escape. Their sponsors are almost never brought to justice.

"The Only Solution Is to Abolish This Evil System"

The women are often not only exploited, but also insulted and beaten. A 21-year-old we'll call Jenny knows as much from personal experience. She says she also came to Lebanon from Ghana about a year ago. In her first family, she was forced to work from 7 a.m. until midnight every day. "Then my mother got sick back home and died. When my madame saw me crying, she told me to stop: 'You're here to work, not to grieve,' she said."

Moving into another household didn't help, Jenny says. "The second family made me sleep on the kitchen floor. The mister hit and kicked me. Their 6-year-old son insulted me in front of his mother. At night, while I was sleeping, he poured water on me. I wasn't a person to them, but an animal."

The fates of exploited migrant workers is the subject of a public debate in Lebanon at the moment, not least because of the international "Black Lives Matter" movement. Farah Salka of the Anti-Racism Movement says: "The only solution is to abolish this evil system."

Zeina Mezher from the International Labor Organization sees the economic crisis as an opportunity for structural reform. "The number of Lebanese women employed as domestic workers could rise," she says. So far, even for Lebanese who perform domestic or care work, there's nothing in the way of occupational health and safety standards. But that could change.

Jenny, who since has found a place to stay with another Ghanaian woman, wants to stay in Lebanon despite everything. At the moment, she's trying to find a day job. "I can't go back yet. I can't tell my father what happened to me here. And returning without money isn't an option." 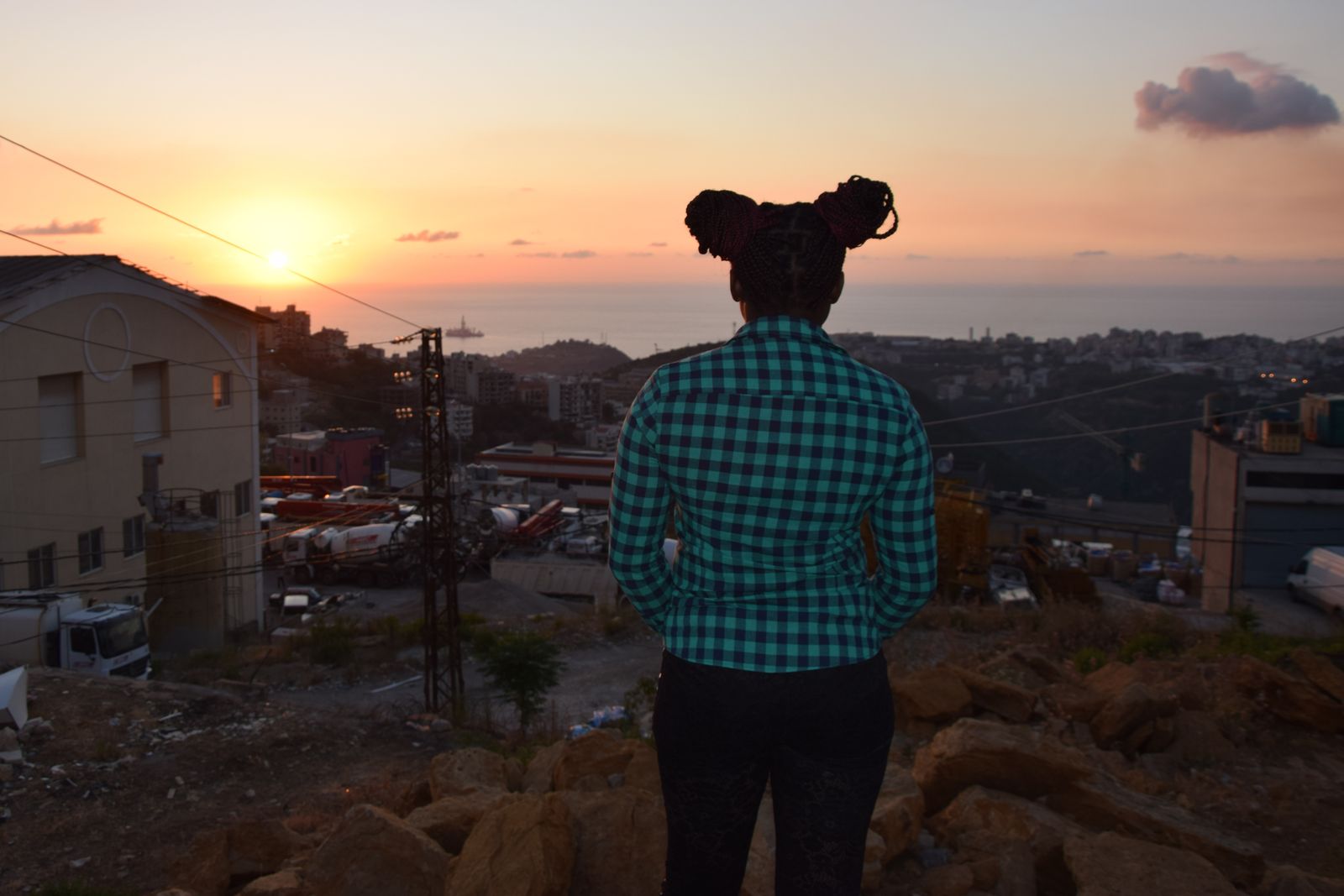 Jenny from Ghana: "I wasn't a person to them, but an animal." 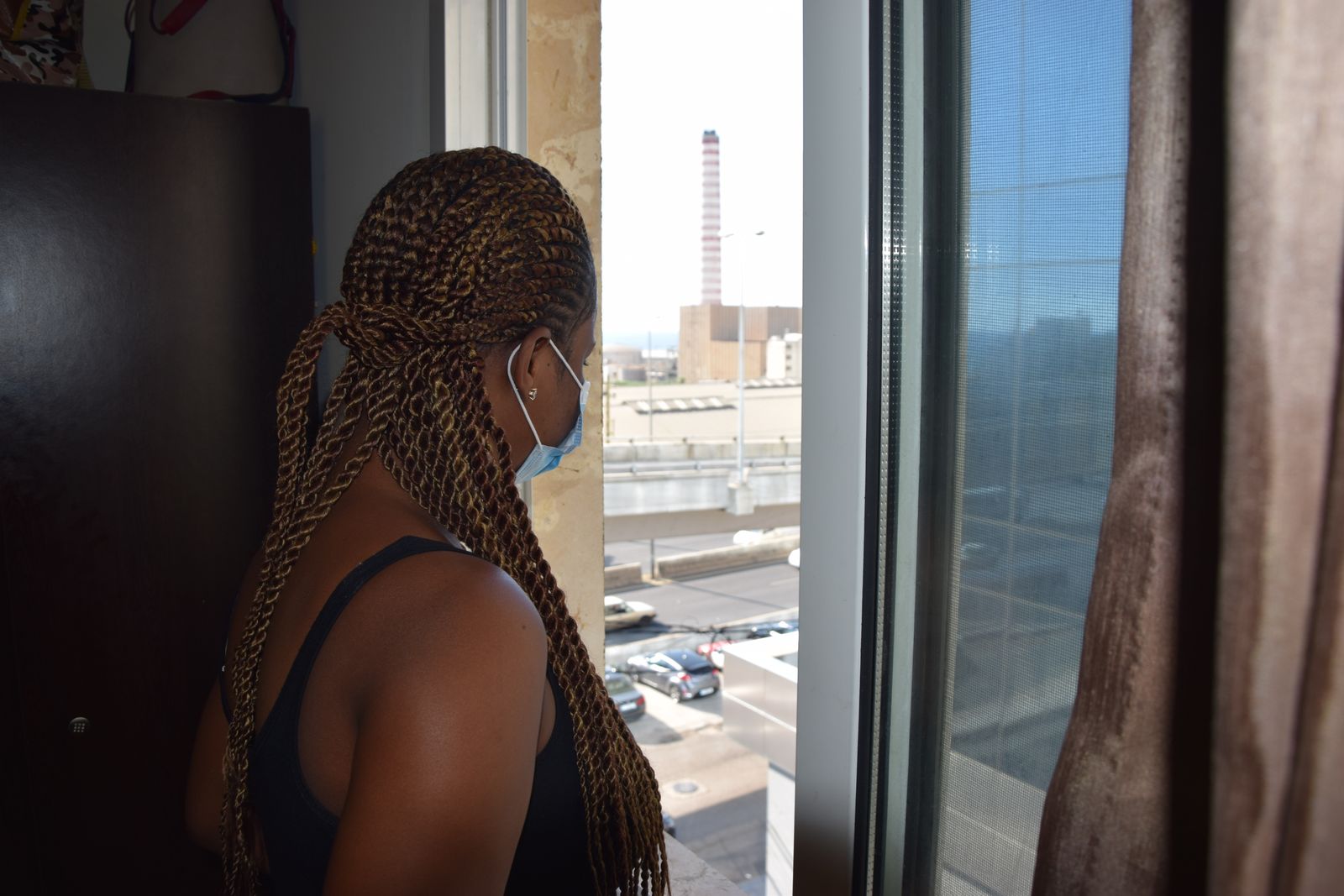 Vanessa, whose name has been changed, looks out the window of her apartment.