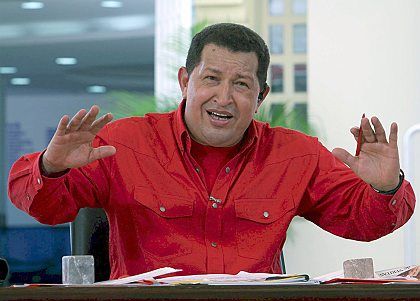 Venezuelan President Hugo Chavez during a broadcast of "Alo Presidente."

The president of the European Commission has jumped in to defend Chancellor Angela Merkel from broadsides coming from Venezuelan President Hugo Chavez, who called the German leader a political descendant of Hitler on his weekly television show on Sunday.

During a visit to Mexico, the European Union's top official Jose Manuel Barroso described Merkel as a "great democrat" and said that Chavez's "inflammatory, populist and aggressive" statements ran counter to efforts to increase cooperation between the EU and Latin America.

Speaking on his talk show, "Alo Presidente," Chavez said: "She is from the German right, the same that supported Hitler, that supported fascism, that's the Chancellor of Germany today."

Merkel has shrugged off the comments. The German government said in a statement that the chancellor was looking forward to the upcoming summit of heads of state from Europe and Latin America in Peru on Friday.

The German leader provoked the wrath of Chavez when she told a German news agency last week that "President Chavez does not speak for Latin America. Every country has its own voice with which it pursues its own interests." Over the long term, she argued, Venezuela could not stop efforts from Europe to deepen ties with Latin American countries.

On Tuesday, editorialists at some of Germany's biggest papers take the Venezuelan leader to task. "One doesn't really need to discuss the fact that Chavez has compared Merkel to Adolf Hitler. Such comparisons can come quickly in Latin America," writes the Munich-based Süddeutsche Zeitung. "But this banter does show how distant some parts of Latin America have gotten from Europe. Pity, since Europe would be the natural partner for the region. Many people in Caracas, Lima or La Paz prefer Madrid, Paris or even Berlin to Washington. For both sides, the idea of working together in the absence of American influence is interesting."

Still, the paper notes, the "political transformation in Latin America is a reality, and most voters feel they are globalization's losers. If the EU wants better contact, then it will have to deal with this phenomenon, including churlish Chavez. Otherwise the Caribbean firebrand will simply follow Fidel Castro's strategy in times of domestic political pressure: He'll declare all critics as his enemies."

The left-wing daily Die Tageszeitung uses Chavez's verbal attacks as a jumping off point to discuss the greater issue at hand: Can Chavez, Bolivian President Evo Morales & Co. improve the situation of the poor in their countries by increasing the state's role in the economy? "Economic liberals like Merkel, who pretty much have free rein in Europe right now, dispute this," the paper writes. "But they also assiduously overlook that fact the the election successes of Latin American leftists since 1998 have largely been a reaction to the fact that the unbridled neoliberalism of the previous 20 years has pushed millions of people into poverty." The paper argues that these important issues probably wouldn't even get covered by the media if it weren't for Chavez's hunger for polemics.

Meanwhile, tabloid Bild calls it a "hate attack against our chancellor," adding that "a country could only be ashamed of a president like that." The paper then quotes the leading foreign policy expert for Merkel's party, the conservative Christian Democrats, Eckart von Klaeden, as saying: "Hugo Chavez is full of nonsense. He should just take to heart the advice the Spanish king gave him." During a meeting in Santiago, Chile, in November, King Juan Carlos told Chavez: "Why don't you just shut up?"