Even before the storm hit America's East Coast, President Barack Obama wanted to show that he's ready, that he can lead the country through this crisis. It was exactly eight days before the presidential election on Nov. 6.

"This is going to be a big and powerful storm," Obama said on Monday. He said he had spoken with the governors of all the affected states and that the Federal Emergency Management Agency (FEMA) had been put on alert. Food and water provisions were at the ready, he assured, adding that in times of crisis, America sticks together. The country was ready to handle this storm, he said.

This is the president as crisis manager. Obama is doing what Americans expect from a president when a massive storm like Sandy comes along: He is demonstratively setting politics aside and acting as the top catastrophe prevention official. When a reporter then asked him, "What about the impact on the election, sir?", the president answered soberly, unselfishly and energetically. "The election will take care of itself next week," he said. "Right now, our number-one priority is to make sure that we are saving lives … ."

His handling of the storm could determine the outcome of the election. "The hurricane will pose a huge test for Obama in the next few days, one that will make the debate in Denver look like child's play," writes Julian Zelizer, professor of history and public affairs at Princeton University, for US broadcaster CNN. Obama lost to Republican candidate Mitt Romney in Denver, giving his rival an unexpected boost in the campaign.

One thing must not happen if Obama wants to have a second term in the White House: If he appears weak like his predecessor George W. Bush did during Hurricane Katrina, he can pack his bags. Bush ruined his reputation in 2005 when it took him four days to show up in New Orleans after the disaster. The federal authorities, particularly FEMA, which Bush had previously downgraded, failed to respond properly. More than 1,800 people died, most of them poor and black. It was countries like Germany that sent food and pumps to the area.

Obama, who has blamed Bush for this failure, must now avoid his own Katrina moment. If he succeeds, the his Sandy moment will lead him to an election victory. The crisis is the hour of the executive office, after all.

And this crisis is just beginning. Monday night was terrible. People died, some 5 million were cut off from electricity, Manhattan was flooded and a nuclear plant on the New Jersey coast was placed on alert and shut down as a precaution. Now Obama and his team must act. Will the victims be taken care of? Is there enough food? How quickly will the power be turned back on?

And it goes on and on. At the center of it all stands Craig Fugate, the FEMA chief appointed by Obama, who has also restored FEMA's powers. Fugate had already proven himself as the former head of the Florida Division for Emergency Management. As Sandy began to hit the coast, Fugate sent out concrete, useful messages via Twitter. "As power goes out, turn on your battery powered or hand-crank radio for news updates from your local broadcasters," he wrote.

Campaigning Goes on Behind the Scenes

Crisis manager Obama has appeared side by side with Fugate and cancelled his campaign appearances for Tuesday. But in the background, his top strategist David Axelrod continues to work on his reelection. During a telephone conference on Monday, he assured journalists that an Obama victory was inevitable, with the president polling ahead in key swing states. The Republican claims that Romney is gaining on the president are merely "bluffing," he said. It took a few minutes before Obama's campaign manager Jim Messina interrupted to ensure that both he and Axelrod were sending their "thoughts and prayers" to the catastrophe zones.

But Axelrod's assurance of victory is hardly backed up by the "cold, hard data" he claims to have, because Sandy and its fallout could actually keep voters that Obama depends on from going to polling stations -- the ordinary people who are hard to motivate. If the power remains out for days, they will likely have better things to do than cast their ballots.

For his part, Romney also cancelled his next campaign appearances shortly after the president did. He can't afford to give the slightest impression that he wants to profit politically from the crisis. He called on his supporters to make donations to the victims. He also renamed an appearance in the important battleground state Ohio. Instead of a "victory rally," it is now called a "storm-relief event," which will help raise money for victims.

Romney is acting presidential and trying to seize the middle ground. He believes that "this is a time for the nation and its leaders to come together to focus on those Americans who are in harm's way," said Gail Glitcho, his communications director, in a statement on Monday.

During the stormy night it could have easily been forgotten that in the summer of 2011 during a televised primary debate, Romney said he wanted to get rid of FEMA, the organization proving to be so important at the moment, calling disaster relief spending "immoral" when the focus should be on deficit reduction. "Every time you have an occasion to take something from the federal government and send it back to the states, that's the right direction. And if you can go even further, and send it back to the private sector, that's even better," he said.

The Huffington Post had hardly reminded the country about this statement when a Romney spokesperson assured that the Republican nominee did not want to scrap FEMA. Of course. There are just 7 days to go until the election. 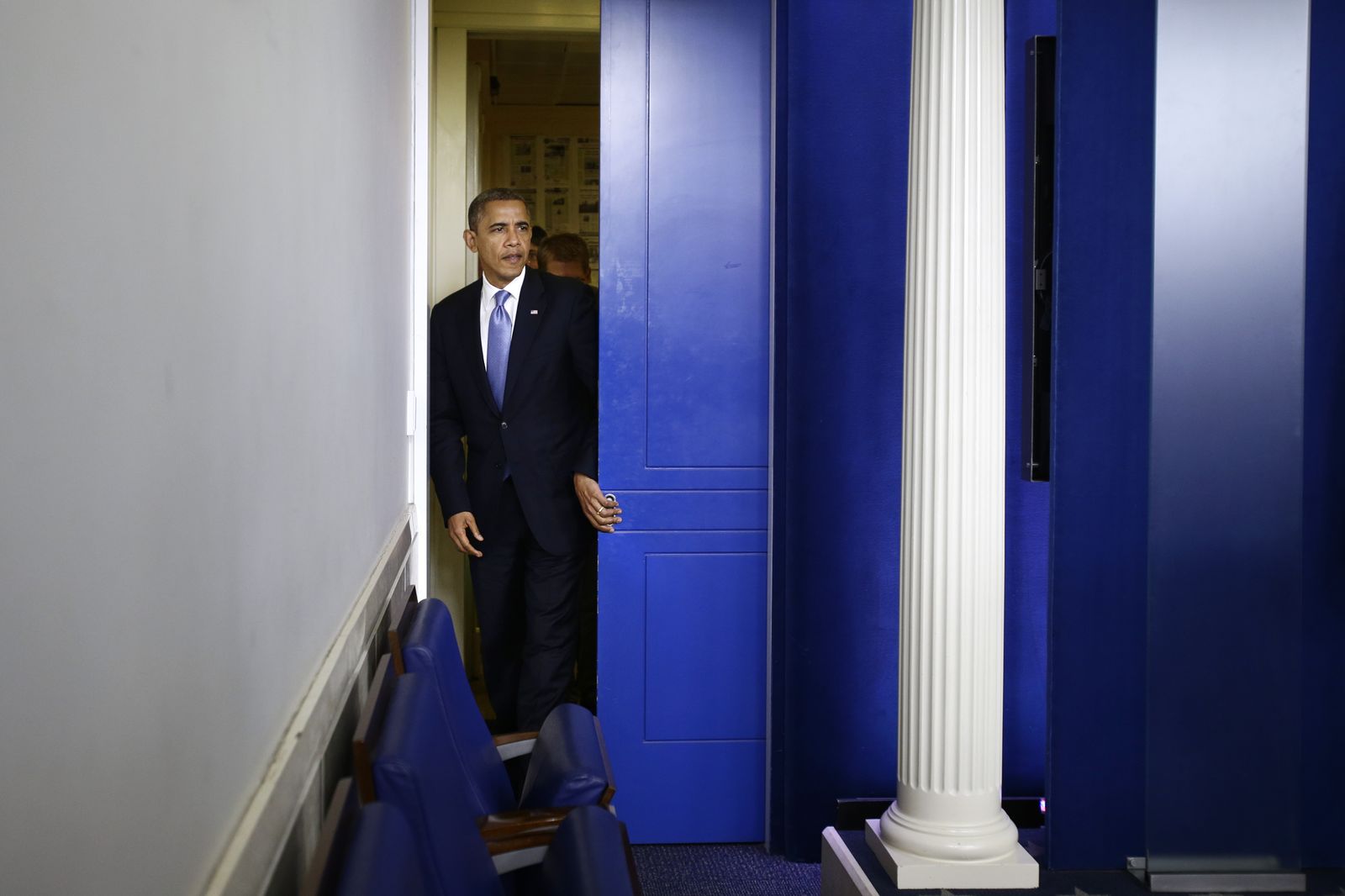 President Obama prepares to brief reporters on Hurricane Sandy in Washington on Monday.