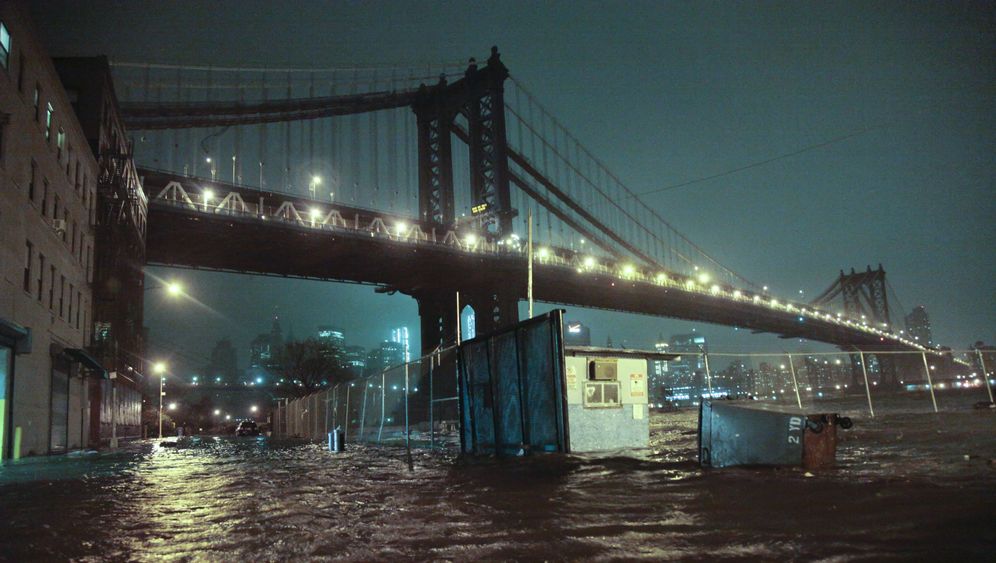 The chaos comes in bursts. First the water. Then the wind and flying trees. Then more water, drifting cars, flooded subway tunnels. Collapsing building facades. And then, at 8:30 p.m. local time, there's a fiery explosion on the East Side -- and half of Manhattan is suddenly plunged into darkness.

The lights go out in almost all buildings south of 39th Street, in skyscrapers and apartment blocks. Only the Empire State Building, the headquarters of Goldman Sachs and a few buildings in Battery Park City continue to gleam weakly. Apart from that, the famous skyline is just a shadowy outline against the storm-ravaged sky.

Even the torch of the Statue of Liberty, the eternal light of the city and the entire nation, went out half an hour before, behind the dense fog.

It is a strange, dramatic image, well visible from the far shore in Brooklyn and symbolic of this storm night of the century. At around 8 p.m., hurricane Sandy had rammed the US coast some 125 miles (200 kilomters) away, flooding the gambling paradise of Atlantic City. Then it hit the 8-million metropolis of New York with full force.

"You need to stay where you are," Mayor Mike Bloomberg, who has long since ditched his jacket and tie, warns New Yorkers late on Monday night.

Large Parts of the Financial District Under Water

At first everything still looks relatively harmless. Manhattan holds its breath: stores, theaters, offices and stock markets are shut, the subway, local and long-distance public transport have been stopped, all tunnels and eventually all bridges closed. The island has cut itself off from the rest of the world, as if to say: "Come on Sandy, we can handle you."

On Monday afternoon, many people where still walking around the city, filming themselves being buffeted by the strong winds and watching the tide rise along the shores. Members of a tour group from the Brazilian city of Sao Paulo took photos of each other on deserted Lexington Avenue. A woman from California standing near them called out: "Oh please, take a picture of me too!"

But the fun soon stopped and Sandy turned deadly serious. A crane on the construction site of a luxury skyscraper on West 57th Street suddenly snapped in half and bent over like a straw. For hours, the arm weighing tons dangled close to a 1,000 feet (300 meters) above the street just across from Carnegie Hall.

Later, the flood walls in Lower Manhattan give way. Soon large parts of the financial district are under water, cars seem to swim across Wall Street. TV reports measure a water level of 14 feet in Battery Park and rising, eclipsing the previous record set by hurricane "Donna" in 1960 by three feet.

Almost the entire façade of a house in Chelsea collapses. The front of the old, four-storey brick building on Eighth Avenue, which has a fast-food restaurant in its ground floor, simply vanishes in a wet cloud of dust, leaving behind open apartments. It looks like a giant doll's house.

The first deaths are reported. A 29-year-old man in Queens is killed when a tree crashes into his house. Another man, also in Queens, is killed by an electric shock. By Tuesday morning, at least 16 are reported dead as a result of the hurricane in the United States and Canada. New York's 911 emergency services are so overstretched that calls go unanswered. Some 10,000 calls go in every half hour -- that's 10 times the usual number received in a day.

Suddenly bad news comes flooding in from all over the city. East Village is under water. Floods in Peter Cooper Village. 22nd and 27th Street: "Completely flooded." It's the same in Hell's Kitchen, Tribeca, the Upper West Side, Upper East Side, the banks at Brooklyn, then the airports Kennedy and La Guardia. The lobby of the Daily News newspaper's editorial office is flooded with more than three feet of water. TV channels broadcast footage without commentary showing the flooded Brooklyn Battery Tunnel, a main traffic route between Manhattan and Brooklyn. At least seven subway tunnels are under water, especially the ones under the East River. Metropolitan Transport Authority Chairman Joseph Lhoto releases a statement saying MTA has "never faced a disaster as devastating" and says there is "no firm timeline" for when New York City's public transportation system will be up and running again.

Manhattan seems to be sinking.

The water comes -- the power goes out. First the ConEd power company switches off electricity supplies as a precaution. Then the transformer stations cut out. At the East River the big station at the end of 14th Street explodes in a tremendous white flash of fire.

A Disaster and its Heroes

A half-million people in Manhattan alone are without power. The last time that happened here was in August 2003 when a major blackout occurred that paralyzed most of the northeast United States. Flashes of light in the night sky appeared to be caused by explosions in transformer stations.

But the night also had its unexpected stars. They included fire fighters who rescued hundreds from flooding apartments and from rain-drenched rooftops. Then there were the volunteers who helped to evacuate the close to 200 people at the NYU Languone Medical Center, with patients having to get carried down the stairs in the dark. Then there was Mayor Bloomberg's sign-language interpreter, Lydia Calas, whose gestures helped countless people.

The havoc wreaked by Sandy has extended far beyond New York. The disaster has struck large swaths of the East Coast, from Virginia, stretching up through Maryland, Delaware and New Jersey to Connecticut. Power outages are being reported in 11 states and more than 5.2 million people have been hit. "This is the most catastrophic event that we have faced and been able to plan for in any of our lifetimes," Connecticut Governor Dan Malloy said.

In Atlantic City, New Jersey, "Sandy" swept part of the beach boardwalk, a protected national landmark, out to sea. All along the coast, idyllic sites have been transformed into disaster zones overnight, including Long Branch, Sea Bright and Ocean City.

Washington has so far escaped the hurricane unscathed, but faces dangerous flood waters on the Potomac River. The natural disaster has coincided with the final stages of the US presidential election, and both President Barack Obama and his challenger, Republican candidate Mitt Romney, cancelled all campaign events on Tuesday in order to address the disaster unfolding along the East Coast. Romney's team also called on supporters in the hurricane's path to remove yard signs backing the candidate. "In high winds they can be dangerous, and cause damage to homes and property," the official Romney campaign site wrote.

At Newark Airport in New Jersey, a major hub for trans-Atlantic travel, the canopy in front of the Hilton Hotel collapsed. "There was a giant lightning strike and a boom," a German guest of the hotel reported. Around 60 German passengers who had been aboard the German cruise ship Aida Luna and had just returned from a voyage to the Bahamas and Bermuda are staying in the hotel. Power had gone out in the hotel on Monday afternoon, and management distributed glow sticks to guests.