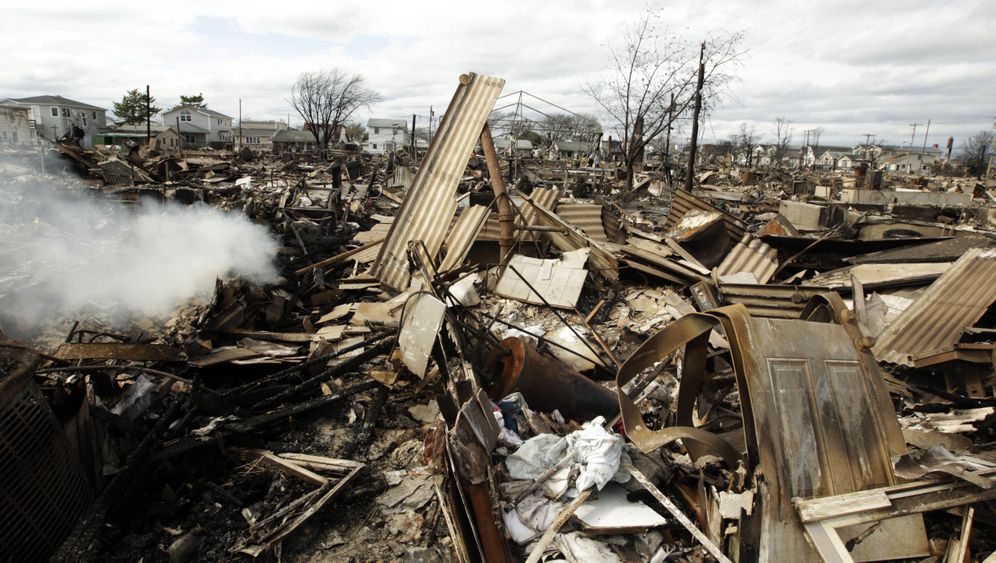 Photo Gallery: 'Pray for Us'

Breezy Point has been decimated. Street after street, one house after the next -- burned out, smashed to pieces or swept away. The only thing left at the end of the peninsula are soot-covered foundations, wrecked cars and dead trees reflecting in the oily, knee-deep water. Here and there, the remnants of chimneys point into the sky, as if to mock the former residents.

"It's like World War II," mumbles Leona Morton. When she speaks, only snippets of sentences come out. Her entire family has been left homeless. Hurricane Sandy destroyed their homes within minutes. "My son, my grandson, my granddaughter, my nieces, my nephews." She shakes her head. "It's all gone. It's horrifying."

It is only now, three days after Sandy struck, that the sheer scale of the disaster has finally become apparent. Entire coastal stretches have been destroyed, 5 million people are still without power, and the death toll is rising daily. According to the latest data, 24 people have died in New York City alone -- more than in any other previous natural disaster to have occurred here.

The worst-hit part of New York has been Breezy Point, at the western end of the Rockaway peninsula in Queens. Far from the chaos of Manhattan, people initially overlooked the tragedy that has been unfolding here. No one died here, and only three people sustained minor injuries -- but the suffering is still immense.

This Queens neighborhood is located at the tip of a small sliver of land that juts out into the sea. It is home to modest wooden houses, a small shopping center, a bar, a liquor store, a beauty salon and two churches. It's an idyllic place set between the dunes and the beach. Given the many immigrants from the Emerald Isle who live here, locals have dubbed it the "Irish Riviera."

Although it may be a community of modest means, it is also a tight-knit one. Everyone knows each other here, whether they are workers, police or firefighters. "This has been paradise for us since we were kids," says Morton, whose eyes are hidden behind her sunglasses. But now it has become hell.

The night Hurricane Sandy struck here, it also set off a major fire that was one of the worst in New York history. The cause hasn't been determined yet, but the suspected culprit is a gas leak. Once it ignited, Sandy's winds fanned the fire and led it to burn uncontrollably. By the time it had been extinguished, 111 buildings had been reduced to ash.

'There Was Nothing We Could Do'

Firefighters had to look on helplessly as their own homes burned down. They were prepared for a storm, but not for a sea of flames. They were unable to traverse the deep flood waters, and their firehouse and engines were also submerged.

"There was nothing we could do," says Lou Satriano, the deputy fire chief, a brawny but exhausted man with a five o'clock shadow. "One house after the other burned down."

Dennis Dier, Breezy Point's director of safety, tries to veil his shock by giving a list of statistics. "There were 2,834 houses. Almost all destroyed. One-hundred eleven burned down. Eighty-five percent are underwater." Around him, groups of neighbors wander through this apocalyptic landscape, dazed and stunned.

Robert Turner, a 71-year-old Republican member of Congress also lost his home. "I am grateful that my family and I are safe after this destructive storm," he says.

Salvaging What Is Left

On Wednesday, local residents slowly began returning to salvage what is left to save. A long procession of people made its way along Rockaway Point Boulevard with hand wagons, trolley suitcases and shopping carts. They were forced to park their cars on just this side of the bridge connecting Breezy Point to Long Island to the north. Just behind the trees, the first planes are starting taking off at nearby John F. Kennedy International Airport.

The walk is a few miles long, and with each step, the horror of what has happened here becomes more obvious. The sides of the road are still flooded. A few shredded American flags wave from out-of-commission power lines on this boulevard of national pride. "God bless America," reads one sign. "God bless Breezy Point."

Then you come across the first ruins: bricks, branches and iron. Many homes are still surrounded by water. Toppled trees have crushed garages. The storm even hurled a massive, 25-foot wooden beam on top of an SUV, splitting the windshield. The object, weighing tons, is balancing on the hood.

Then comes the dismay. Flood waters washed entire buildings off their foundations and rammed them into the neighboring house. The storm tore the walls off others, leaving the rooms exposed like some grotesque doll house -- with wet sofas, flower vases and even a complete home bar, replete with neatly lined up bottles of Cognac -- for anyone to see.

And, finally, total destruction. In this area, no house is left standing. Verandas, terraces, the green rooftops, everything has disappeared -- shattered in the storm or engulfed in the flames. At one place, a burned-out statue of the Madonna remains, lifting her hand as if to bless the ruins that continue right up to the horizon. There, the surf is breaking, harmless now, as if nothing has happened. The soot in the air burns your nostrils.

It is the flotsam of an entire generation. Photo albums, single shoes, lamp shades, glasses, plates, a rosary, a ball, a pink plastic tricycle. The sea also engulfed a playground, and now the slide looks like some kind of colorful ship in the water.

'How Are We Going to Survive This?'

Two women dressed in black crouch in front of the ruins that were once their home. They're crying. The sisters don't want to give their names, but they do share their pain. "Everything is destroyed," one of them says. "The water took our house." She points her finger to where she thinks the rubble has been deposited. What is left of their belongings fits into two blue plastic IKEA bags. "Photos, my wedding album, past memories -- everything is water-soaked or ruined." When asked if there is anything that can be done for them, one answers: "Pray for us. Pray for us."

"We grew up here," sobs the other. "We survived Donna. But I don't know how we're going to survive this."

Donna was the last major hurricane to strike the area that people can remember. It happened in 1961. Then, on Sept. 11, 2001, the community here lost 37 members in the inferno at Ground Zero -- cops, rescue workers and firefighters. Two months later, an Airbus A300 crashed in Belle Harbor, just a little east from here, killing 265 people, including five on the ground. They survived all those things. Recently, a tornado even touched down here.

"Tornados, hurricanes," says Maureen Donellan, "this reminds me of a war film. What's gone wrong with the world?"

Her husband, Kevin, walks by carrying the things he was able to salvage from the heap of rubble: A cracked magnifying glass with a shell handle that Maureen says was "our house-warming present." Two cases of Coors beer. An apparatus that turns out to be a margarita machine. "At least we still have our booze," Donnellan says, giving a hearty laugh. "And our gallows humor."

John Martin, who has also lived here for what seems like an eternity, says he has never experienced anything like this. "Everything is destroyed, block after block," he says, as he lifts what is left of his belongings into the bed of a truck. "But we will rebuild."

Help is only arriving at Breezy Point in slow motion. The Fire Department is there, as well as the police. They drive local residents around in small trucks. The Red Cross hasn't visited yet. "So far, no one has made it here," says Martin. "But they'll be here soon, for sure."

Instead, it's the looters who are showing up. "I've caught two already," says Robert Dyer, who together with his wife, Dawn, has just pumped the water out of his basement -- at least what is left of it. "They had hammers and crowbars in their backpack." His face turns red with anger. "We're New Yorkers. We don't do things like that. How can a person want to profit from the suffering of others?"

For Leona Morten, rebuilding seems like a distant possibility. First she has to find a place where her large family can stay. For now, they can bunk with relatives in Brooklyn. She peers around. "I don't want to leave -- I love this place so much," she says with a sigh. "Even now."