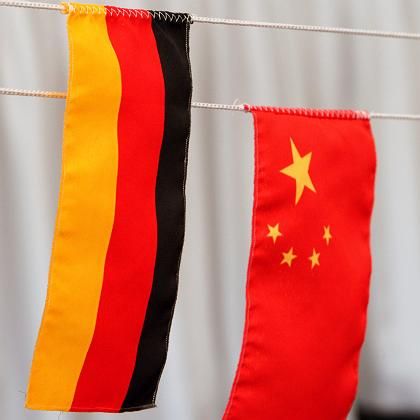 Germany and China are not getting along so well these days.

Relations between China and Germany are the worst they have been in years after Chancellor Angela Merkel received the Dalai Lama in the chancellery last Sunday.

The visit "grossly interferes with the internal affairs of China," Foreign Ministry spokeswoman Jiang Yu announced during a routine press conference in Beijing on Monday. The meeting "hurts the feelings of the Chinese people and seriously undermines China-Germany relations," she said. Now it was up to Berlin to ensure the meeting did not "bring any unnecessary damage," Jiang announced: "We request that Germany... take concrete and effective measures to eliminate the negative impact." The spokeswoman did not spell out what Beijing expects those concrete measures to be, or how far Berlin would have to go to make amends.

The harsh tone is in stark contrast to the meager reporting in the state-controlled media. Chinese citizens would only have heard about the planned meeting between Merkel and the spiritual leader of the Tibetan Buddhists through a short announcement by Jiang last Thursday. On Sunday and Monday, newspapers, agencies and TV channels ignored the event in Berlin that had allegedly enraged so many Chinese people.

On the Internet, however, bloggers sharply attacked Merkel and even insulted her. "This woman has never been friendly toward China since she has been in power," was one of the milder comments. The harsh rhetoric is interesting because personal attacks on domestic and foreign politicians are usually not tolerated by the censors. The exceptions are the Dalai Lama and the Taiwanese President Chen Shui-bian, who is fighting for the independence of the island from China.

It is not clear whether the press will repeat Jiang Yu's statement, or if the reaction is only aimed at the Germans. The restraint is explained by the fact that the Dalai Lama is persona non grata in Beijing. He is regarded as a diehard separatist who cannot be trusted. The Chinese Communist Party does not accept his assertion, repeated during his meeting with Merkel, that he doesn't want independence but autonomy for Tibet.

The Dalai Lama's trips around the world to campaign on the issue of Tibet are regarded by Beijing officials as aggressive acts. Careful attempts at reconciliation between Beijing and the Tibetan government in exile in the Indian city of Dharamsala have so far proved fruitless. First of all, goes the official version, the Dalai Lama has to prove that he has peaceful intentions.

Beijing's reaction to Merkel's meeting with the "god-king" has been particularly severe because it happened so soon after the chancellor's visit to China at the end of August. At the time, Prime Minister Wen Jiabao had praised her for her direct manner. Now he will be in a certain amount of disgrace with his comrades.

Chinese diplomats interpreted the meeting as a sign of a change of direction in Germany's policy toward China. They fear that the new leaders in France and Great Britain, Nicolas Sarkozy and Gordon Brown, will follow the chancellor's example.

And the visit to the chancellery in Berlin came at a particularly inopportune time: The 17th Communist Party Congress begins on Oct. 15, and the Beijing leadership is in the midst of its preparations. The leaders' primary concern is to hold the important conference undisturbed by any domestic or foreign tensions. In this context, Merkel's actions are perceived by the officials as deliberately disruptive.