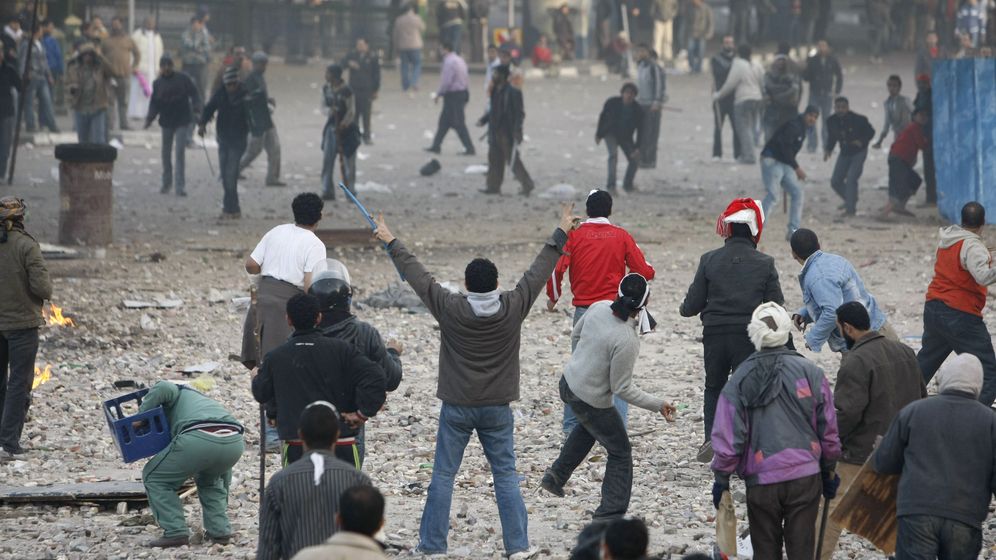 The young woman's voice is already hoarse, but that doesn't stop her from shouting. "We are all Egyptians. We should not be killing each other," she croaks. There are tears in her eyes. Maha has persevered for seven days and nights on Tahrir Square in downtown Cairo, protesting peacefully for the overthrow of President Hosni Mubarak. Now groups of shouting men are walking past her. Many are bleeding from head wounds after being hit by rocks. Their faces are distorted with hatred, and they are carrying rocks in their hands. Maha spreads out her arms and tries to stop them. "Enough of this," she shouts. "Stop doing this." But the men ignore her and keep running as in a trance. Then they throw their rocks.

It is around 1 p.m. on Wednesday, one day after the biggest demonstrations to date, in which hundreds of thousands of people, possibly even millions, peacefully protested on Tuesday against President Mubarak. The Egyptian strongman, however, is still in office -- he refuses to relinquish power, saying that he intends to remain in office until September, when his current term as president ends. On Wednesday, tens of thousands of regime opponents were back on the square in downtown Cairo, the heart of their uprising against the government, which has ruled Egypt with an iron fist for the last 30 years, lining its pockets in the process.

It would be the day on which the dream of a peaceful revolution against Mubarak would finally collapse.

At noon on this Wednesday, a bloody street battle began on Tahrir Square between opposition forces and the followers of the ruling elite. Thousands of Mubarak supporters suddenly appeared, seemingly out of nowhere, on all major access roads and began pushing their way toward the protest of the regime opponents. In the end, no one will know for sure who threw the first of the thousands of rocks, or who struck the first blow. By evening, only one thing was clear: According to official information, more than 600 people were wounded in the street fighting and three were killed, although the real numbers are likely much higher. Later in the evening, a doctor estimated that there were 1,500 wounded. The revolt against Mubarak has turned into a bloody power struggle.

On Thursday morning, the violence continued. Gunfire rang out on the square in the early morning hours, killing at least three. Sustained bursts of fire continued for several hours.

The aggressiveness of the Mubarak supporters, who his party had organized and brought into downtown Cairo, was palpable from the beginning. Shouting men jostled in front of the barricades around the square, striking Western reporters without warning and trying to force them to return to their hotels. "This is a matter between Egyptians," they chanted. "Let us handle it ourselves." It seemed as if such scenes were being staged by the regime -- as they had been on Tuesday. During the March of Millions, state television initially broadcast only absurd images of a small demonstration of Mubarak supporters in front of the royal palace. The regime simply ignored the mass protest on Tahrir Square.

But then, on Wednesday, the rocks began to fly. Thousands of Mubarak supporters forced their way into the square, next to the Egyptian Museum, joined by others riding horses and camels, and carrying countless signs bearing the likeness of a youthful Mubarak. The storm had been unleashed. Within minutes, protesters on both sides were throwing volleys of rocks at each other. The military, which had remained neutral until now, was still separating the two groups. Dozens of men with gaping head wounds were pulled out of the crowd, while their friends pulled up new stones from the pavement and the street clashes continued in earnest.

With the violence seemingly uncontrollable, the soldiers withdrew for a time and partisans on both sides climbed onto the tanks and threw even more rocks. At first, the mostly younger regime opponents tried to stave off the intruders by forming human chains, but soon they too became increasingly violent. Instead of students, who had been at the forefront for much of the week, young people from the impoverished Cairo suburbs were suddenly on the front lines in the running battle against the Mubarak supporters. In a frenzy, they rushed forward while loudly shouting "God is great," hurled their rocks and ran back to collect new ammunition.

The regime opponents repeatedly dragged their wounded opponents across the square, shouting things like: "This is an undercover policeman." The suspicion alone was enough to prompt a small crowd of hate-filled people to gather around one wounded man, who was then brutally beaten. "He is like Mubarak. Now we will kill him," they shouted. In most cases, moderate protestors managed to prevent mob rule -- but it certainly seemed possible that some of the wounded may have been killed on side streets.

There seemed to be no end sight to the hatred and bloodthirsty clashes. The two fronts moved back and forth for hours. Security forces that had been called to the scene remained in position on a highway overpass behind the Egyptian Museum and on a Nile River bridge. A helicopter hovered constantly over the combat zone, where men, despite having lacerations covered with makeshift bandages, continued to rush at the opposing side, fueled by adrenalin. "We have suffered for 30 years, and now we're going to kill them," some on the side of the Mubarak opponents shouted. "They want to destroy what we have achieved with Mubarak," the president's supporters shouted back.

The regime opponents see the escalation of violence as a calculated move on the part of the president. They claim that with the organized mobilization of his supporters -- which, they say, include experienced provocateurs -- he was deliberately trying to provoke the murderous images of street fighting that were being broadcast around the world throughout the day. The clashes continued to flare up periodically at night amid the sounds of gunfire and exploding Molotov cocktails.

Still, opposition groups must also regain control over their movement. As much as Egyptians suffered under the regime, the images of sheer hatred among the ranks of Mubarak opponents were equally repulsive.

These images suit the president's purposes all too well. In his speech following the massive protest on Tuesday, he made it clear that he -- and only he, as the commander of the hard-hitting police force and the merciless intelligence service -- could organize an orderly transition to a new government. After a day of civil-war-like images coming from their capital, his words may have impressed many Egyptians. Instead of pinning their hopes on open confrontation with Mubarak, many could opt for a compromise that guarantees the president an honorable exit -- but one which would also be a transition into a system in which his supporters could at least have a say.

If the opposition calls for another major protest in Cairo on Friday, it could prove to be more difficult to mobilize supporters than before. Besides, its leaders must now fear that the next demonstration could end in a bloodbath. This could discredit the protest movement, and Mubarak's ice-cold calculations could add up.

It is now clear that the faltering president will stop at nothing to get what he wants. He is even willing to take the risk that the mob will go on a rampage and plunder Cairo in the coming days. There are few recipes for peaceful resistance against a president who is willing to be this ruthless to secure his position of power, even for such a short time.