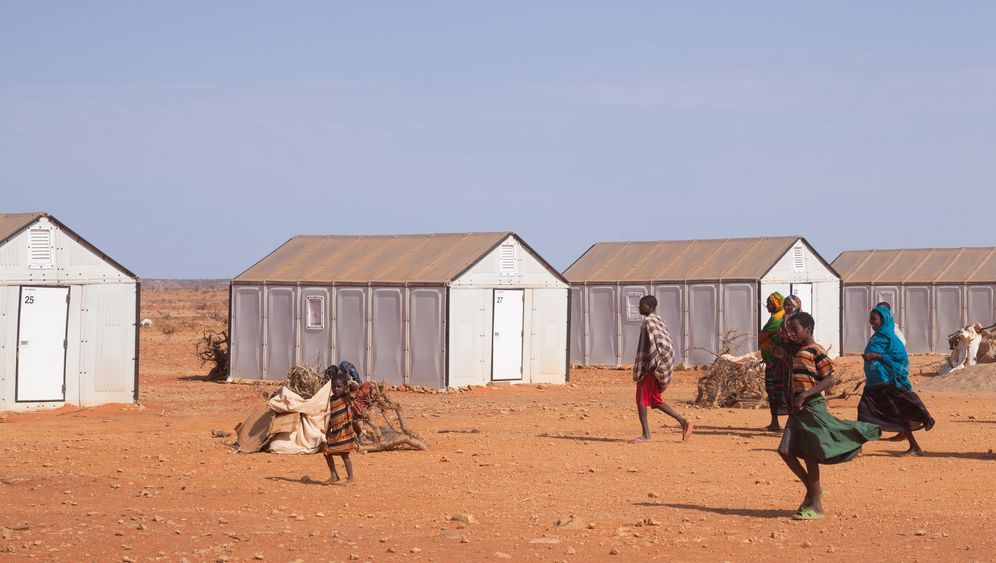 The howling wind is always the first thing that Sayunda Hassan Ibrahim hears when she wakes up in the morning. The constant buffeting makes the walls shake, but something has been different for the past three weeks. Although Sayunda still hears the wind, she doesn't notice it as much as when she lived in a tent.

When she gazes up from her sleeping mat these days, she sees beige roof panels, metal and plastic supporting rods and plastic bolts. It's a strange sight for this young refugee from the Somali countryside. An average consumer from Western Europe, though, might recognize some of the components.

The Swedish furniture giant IKEA had 13 newly developed huts erected on the Ethiopian savanna at the Kobe refugee camp last August. The precisely arranged row of Swedish-designed structures stands in stark contrast to the tents and barracks in other parts of the camp. It's a test case for the company, and if the IKEA huts pass, they could soon offer refugees around the world a better home than conventional tents.

"It's essential to test these structures in a raw environment to get an impression of their durability," says Olivier Delarue from the United Nations Refugee Agency (UNHCR), which currently houses more than 10 million people worldwide. He says he hopes these new shelters will provide "physical protection, but also emotional benefits like dignity and privacy." The initial test phase is due to be completed by the end of the year.

Sayunda Hassan is 15 years old and has been fleeing war all of her life. Now, together with her parents and three siblings, she is living in the 17.5 square meters (188 square feet) of living space offered by an IKEA shelter.

The plastic huts are exposed to the hot wind on the edge of the Kobe camp, which is a hellish place. During the dry season, temperatures soar above 40 degrees Celsius (104 degrees Fahrenheit). And after enough dry weather, the dust arrives -- a reddish powder that works its way into every crack and crevice and makes it hard to breathe. When the wind blows hard, Kobe is covered in dust.

A bit of dust has also made its way into the Ibrahim family's hut, due to the holes drilled in the roof. In just a few days, a solar module will be mounted there and connected to a rechargeable battery that powers a small lamp at night.

Planners hope that the huts' assembly problems will soon all be ironed out. IKEA designers have promised it would be possible to piece together the small houses -- by hand and without any tools -- in just four hours. In reality, says Ismael Abdullali Abdinoor, it usually takes an entire day to build one. The 38-year-old Somali also lives in one of the new plastic abodes.

Camp managers have appointed him as a kind of superintendent for the IKEA structures. When it's time to build a hut, he's there to help. If something breaks, Abdinoor steps in. "It's a lot of work," he says, "but the new houses seem much more stable than the huts and tents that are used elsewhere in the camp."

He's a refugee like the other 37,000 Somalis in the camp. But he's proud to now have a door that he can step out of -- in fact, he even has two doors. All IKEA structures have dual entrances to ensure that residents can always exit on the downwind side. "Otherwise it would be virtually impossible to open the door on stormy days," says Abdinoor.

Normally it takes less than a year before the tents supplied by aid organizations are reduced to tatters by wind, sand and insects. If the weather is particularly severe, six months of wear and tear is enough to ruin them. The IKEA huts are designed to last at least six times longer.

The company has outsourced the designing of the new shelters to a Swedish organization called the Refugee Housing Unit, but IKEA provides the technology. The prototypes are made by hand in Sweden. At $7,000 (€5,000) each, they are still far too expensive. But once they go into large-scale production, designers are aiming for a price of $1,000.

IKEA is likely to benefit from the promotional value of the campaign, which would be a positive development since dubious manufacturing conditions and the right-wing past of company founder Ingvar Kamprad have tarnished the firm's image. The IKEA Foundation, the furniture maker's philanthropic branch, has so far invested €3.4 million in the project.

"These people are living under extremely difficult conditions," says the head of the foundation, Per Heggenes, "and we want to use part of IKEA's profits to help them make a new start."