Gruesome images are once again coming out of Syria. And, yet again, people are asking who committed the horrific acts. The Syrian opposition accuses the regime of having murdered more than 220 men, women and children in the central Syrian village of Tremseh. Some were reportedly killed by shelling from the Syrian army, while others were killed by pro-government thugs from nearby villages.

Koffi Annan, the international envoy, said on Friday that it had been proven that artillery, helicopters and tanks had been used in Tremseh, adding that it showed that the Syrian army had clearly violated the peace plan meant to end the 16-month crisis in Syria that has left thousands dead. Meanwhile, the Organization of the Islamic Conference (OIC) has called on the UN to use all means to intervene in the conflict.

As has so often been the case in this bloody conflict, it is almost impossible to confirm information regarding the massacre. One reason for this is the fact that security worries have led the UN observer mission to put its deployment on hold. Another is that the Syrian regime refuses to allow representatives of the UN Commission on Human Rights (UNCHR), journalists and officials from international organizations to examine what is happening in the country in an unfettered and independent manner.

The amateur videos that Syrian activists have been uploading onto YouTube only tell one side of the story. But even these have been very revealing in that they suggest that the conflict in the rural regions of central Syria, where people of different faiths live in nearby but separate villages, is evolving into a brutal religious war. What's more, it would appear that the flames of this war are being fanned by the Syrian army, whose actions have only helped provoke religious tensions.

Tremseh is a small village roughly 15 kilometers (9 miles) northwest of Hama. But this isn't the first time it's been in the spotlight. The first videos claiming to have been shot there already found their way onto YouTube on July 5, 2011. They show a procession of demonstrators chanting: "The people want the regime to fall!"

Reading this on a mobile device? Click here to view.

In the months since then, a stream of new protest videos of this kind has been uploaded onto YouTube. Some images show people in a celebratory mood. A few hundred people -- men, women and children -- talk and dance while a man leads others in shouting "Bashar, get lost!" When Syrian dictator Bashar Assad is addressed this way, it's clear whose side the demonstrators are on.

The first images of corpses appeared on Dec. 2, 2011. They show two young men lying on stretchers in a room. One has a gunshot wound to the abdomen, while the other has a large sutured wound on his stomach. The men had reportedly been killed by backers of the Assad regime. A video allegedly shot on the following day shows the flag of the opposition flying over a funeral procession.

Despite all the victims, these demonstrations have continued to be held. One video that was claimed to have been shot in December 2011 shows protests under the caption "We will carry on until the regime falls!" On Feb. 15 and 19, 2012, there were once again images of people reportedly shot to death by a group of 10 regime supporters from nearby.

A little later in the same month, the Syrian army apparently launched its first offensive against Tremseh. Videos show houses riddled with bullet holes and a minaret that had been smashed by artillery fire in what is tantamount to a conscious religious provocation. In the video, an activist yells out: "God is greater than you, Bashar!"

Indeed, this is not the first that that Assad's soldiers have offended Sunni sensibilities. For example, last year, the army intentionally launched an offensive to coincide with the start of Ramadan, the Muslim holy month of fasting. But what's new is that the army -- or what's left of it after all the desertions -- is openly siding with the Alawis, members of the Muslim religious sect that makes up less 10 percent of the Syrian population but has a virtual monopoly on key positions of political and military power. Already in May, there were reports that the army teamed up with local Alawite thugs to commit the massacre in Houla.

Reading this on a mobile device? Click here to view.

The video posted on March 28, 2012, is shocking. It reportedly shows elements of the Syrian army as they are beginning to pull out of Tremseh. In it, soldiers are sitting in white busses, on pick-ups and in cargo trucks full of crates. The hood of one pick-up is adorned with the word "Bashar!" The convoy also includes tow trucks pulling cars. Indeed, it looks more like the soldiers had been on a plundering mission than leaving a battle with insurgents.

At a certain point, the video shows a woman with light-colored hair and a ponytail; at another, it shows a dark-haired woman with a ponytail. In rural regions of Syria, it is unusual for Sunni women to not cover their hair. This leads one to believe that the inhabitants of this nearby village belong to one of Syria's minority religions and are presumably Alawis, like Assad and the majority of the country's security apparatus. Thus, it would appear that conscious religious motives were behind the Syrian soldiers' actions.

This is the background of this alleged massacre, which reportedly saw neighbors killing neighbors. The other side's perspective is unknown. Had inhabitants of Tremseh previously threatened, robbed or killed Alawis from the nearby village? One can't be certain. But, in any case, it appears that the war has now turned into a merciless religious war in the small villages of central Syria. 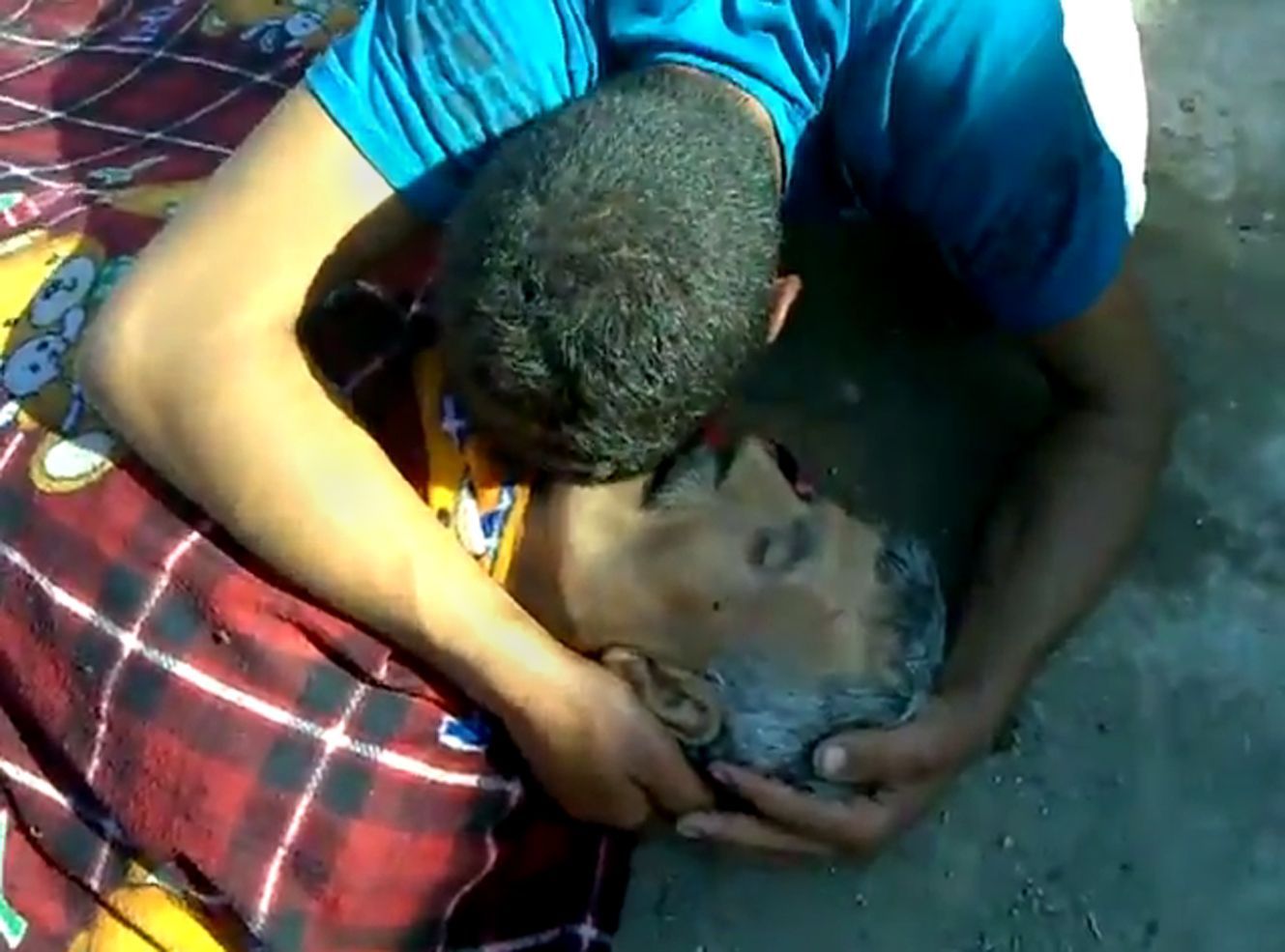 A video image purports to show a man mourning a victim of attacks in Tremseh, Syria.