SPIEGEL ONLINE: A debate is currently raging in Germany over how Berlin should deal with Moscow. Some are demanding tough criticism of Putin, while others are warning that this might burden business relations. Which is the correct approach?

Inozemtsev: Criticism from the outside will have no effect. You can forget Russia as a democracy for the next five to 10 years. Major progress in the modernization of the country cannot be expected. Germany should concentrate on its economic interests.

SPIEGEL ONLINE: So forget hopes for democratization and instead focus on business as usual?

Inozemtsev: Yes. Russia's current political and economic system is stable. Between now and 2018 there isn't likely to be upheaval. The economy will continue to grow until the end of Putin's term in office by 2 to 3 percent annually. And the majority of the population will remain content because they have never lived as normally as they do now. The system is showing no signs of disintegration.

SPIEGEL ONLINE: On what do you base such conclusions?

Inozemtsev: Russia has even done a good job of overcoming the global financial crisis -- it withstood such external shocks. Those who hope that Putin will soon fall through some kind of economic crisis are kidding themselves. The economic system is robust and flexible.

SPIEGEL ONLINE: The Kremlin recently passed new laws on treason and the right to demonstrate, and a number of opposition leaders are threatened with long prison terms. Will this not foment anger against Vladimir Putin?

Inozemtsev: At its core, Russia is a free country. For normal people, the limitations on freedom are minimal -- they can travel and inform themselves as they wish. But it is another factor that will be decisive: Very few Russians come to the idea of organizing in order to collectively solve societal problems. Instead of founding an organization against police repression, most would simply prefer to offer traffic police bribe money. This simple, individual solution exists for every problem. Corruption functions just like a vent. And if the Kremlin now tightens the screws on the opposition, it is signifying precisely this: People, don't try to solve your problems collectively. Otherwise you're going to have problems.

SPIEGEL ONLINE: So you would rule out the possibility of the kind of mass protests that were seen at the end of the Soviet Union?

Inozemtsev: Many hated the Soviet Union -- it restricted, hampered and hobbled people. Those who rebelled were threatened with banishment to Siberia. Those who get sick of things today simply buy a ticket to London, and nobody stops them.

SPIEGEL ONLINE: You were the organizer of the Yaroslavl Global Policy Forum initiated by Dmitry Medvedev. The former Russian president wanted to modernize Russia. Was he at all successful?

Inozemtsev: No. Progress and modernization arise from efforts to become more efficient. That contradicts the entire logic of the Russian economy. In order to produce a dollar of economic output, Russia consumes many times as much energy as Germany requires to do the same. Goods produced in Russia are constantly getting more expensive, but they are not getting better. Take the example of the Kalashnikov (AK-47) machine gun: The product is the same as it was 20 years ago, but it costs 10 times as much today. Or Russian road construction: Expenditures are constantly rising, but not the number of roads that have been built.

Inozemtsev: No one has an interest in efficiency. Just look at Gazprom: The company will never attempt to increase efficiency -- it will simply keep raising prices. A serious modernization effort would require the Russian elite to make a complete 180-degree U-turn.

SPIEGEL ONLINE: Still, Russia has announced that it will develop its own computer operating system, and the head of the company that owns Lada has said in interviews that the company could compete "directly with Mercedes."

Inozemtsev: In some sectors, one has to create the illusion of success in order to get access to state subsidies. That's a major PR bluff. It works because people never make the effort to verify whatever comes of announcements and promises. That is Russia's calamity.

SPIEGEL ONLINE: President Vladimir Putin has said that he wants to create 25 million "modern" jobs during the next 13 years.

Inozemtsev: Putin has a problem. He only views the world through the lens of money. He believes that the amount of money that he distributes for industrial products or education should absolutely represent the results that are achieved. But the money seeps away. The state serves the interests of its corrupt elite. Take a look at St. Petersburg. If Putin had been serious about modernizing the city, then the new stadium for the Zenit football club would have been built long ago. Originally, €200 million had been planned for it, but costs have swelled to €1.1 billion and the arena is far from complete.

SPIEGEL ONLINE: But why shouldn't Putin be able to achieve the kind of modernization seen in China or South Korea?

Inozemtsev: Successful modernization always arises from a lack of any other alternatives. That was the case in South Korea after the war with the north, in China after the devastating Cultural Revolution, but also in Brazil under the military dictatorship. It is also a step away from a terribly sensitive past. Those who want to modernize cannot say that things were better the way they used to be. But in Russia today, there is once again a lot of talk about how good things were during the Soviet Union. 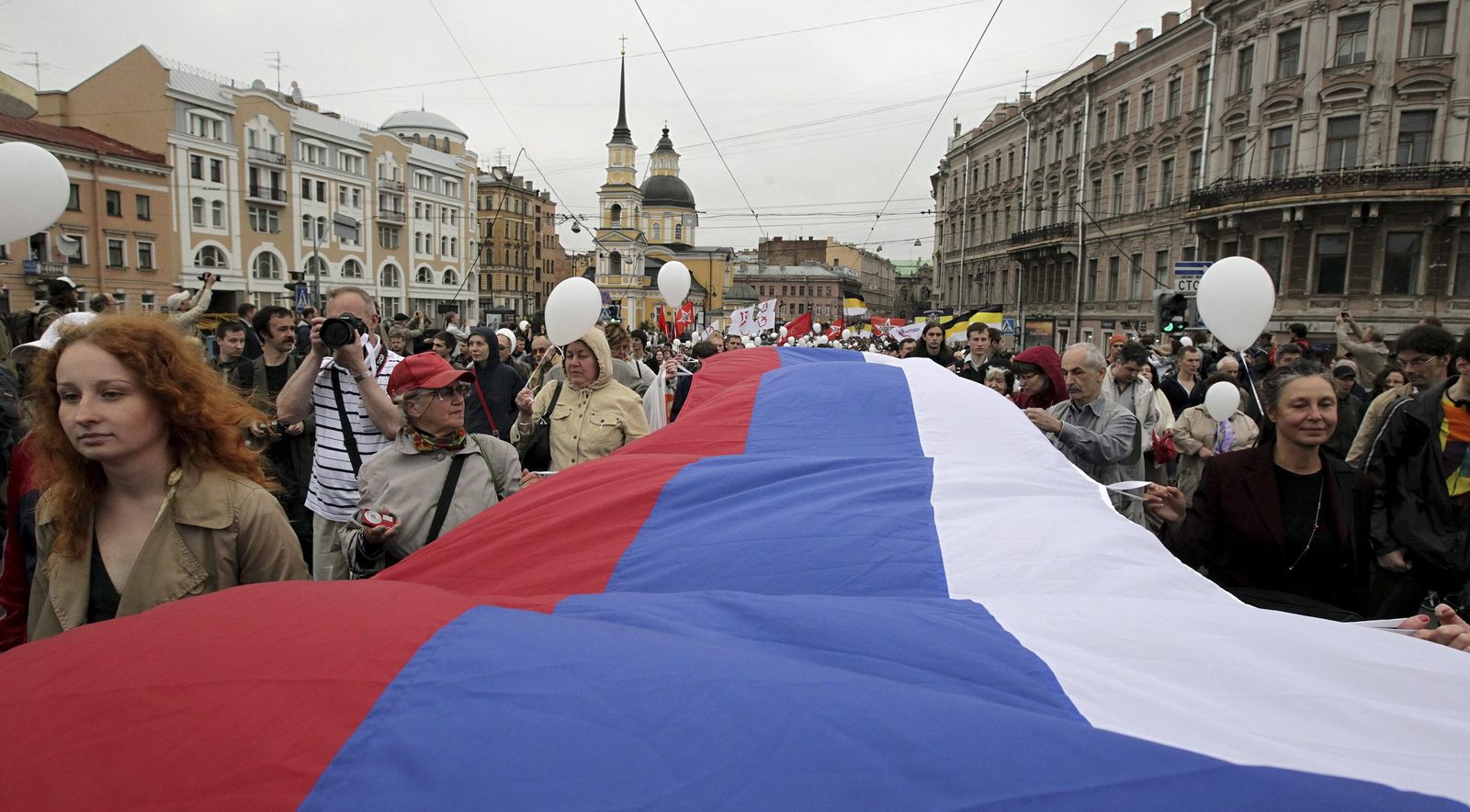 Demonstrators carry a huge Russian flag as they parade during an opposition rally 'For Russia without Putin!' in St. Petersburg in June.