Now Barack Obama is guilty, along with an America that is oil-dependent, ultra-consumerist, superficial and detached from the world. The White House messiah had proclaimed a new direction for a warming planet -- and hasn't fulfilled his vision within a historical second. Ten months into his term, the United States is showing up at the global climate conference in Copenhagen without having passed a climate change bill.

The US is not delivering. US President Barack Obama has -- according to the commentaries, including one on SPIEGEL ONLINE -- "neglected" climate change policies, "betrayed" his claim to be a "citizen of the world," and has been "dishonest with Europe." When it comes to climate change, he is "following in the footsteps of his predecessor."

Bash Obama. That's the new style, the new tone. People have to vent their frustration. Disappointed lovers can be quite bitchy.

The view that US leadership can't be anything but good and pure is one of the most beloved German clichés about the United States. But whenever reality tarnishes the idealized image of the US as an exemplary guiding force in the world, there's a storm of criticism which is about as excessive as the messianic hopes that had been pinned to Obama. Super-human Obama was expected to instantly erase 12 years of climate policy stagnation and immediately catch up with Europe's effort to create a zero-pollution world. And because he couldn't accomplish all that in a few months, he's in trouble now.

On the one side, there's the opposition that blocks anything Obama proposes -- regardless of what it might be. Then there are the unions, always structurally conservative, who would rather save dying jobs than create new ones. Further, there are companies that view the unlimited burning of fossil fuels as a precondition for making profits.

Finally, there are also a number of states -- around 10 -- where all of these interests converge. The industrial makeup of these regions is similar to that of Poland, where people's livelihoods are tied to carbon intensive industries. Should it be any wonder, then, that the favored environmental policies of these states are similar to those of Poland? Is it any surprise that elected Democrats from these regions harbor the same kind of positions one can still hear today in German labor organizations like the IG Metall metalworkers union?

In Germany, People Like to See Themselves as Enlightened

Did anyone expect that it would be easy to burden companies and consumers in the US with a bill totalling billions? In Germany, it's fashionable for people to consider themselves enlightened. They like to boast that they have a trading system for emissions, that air pollution is expensive and unprofitable in the long run. But a few words of caution are warranted. Germany's most important climate protection instrument is based on a European directive that had to be converted into national law. If members of the German parliament had a debate and a decision on the matter without guidelines from Europe, they probably would have felt the same intensity of pressure as their US colleagues.

Thanks to Europe's democracy deficit, Germans can now brag about their progressiveness. But even under these conditions, Germany sometimes runs out of breath. Take, for example, last year when the most recent version of the European Union's climate package was presented. It included a kind of subsidy program for the construction of new coal-fired power plants. Germany's "climate chancellor" no doubt had a role in that.

And even if Obama were to succeed in charming Congress tomorrow, his critics in Germany would still be far from pleased. After all, the draft legislation being considered there doesn't even come close to what those critics would like to see. They would claim that what Congress is currently debating is laughable.

But that depends entirely on the yardstick used to measure it. To catch up with Europe, the US would have to accept the same emissions reductions targets as Europe for the year 2020. Because it is starting later, though, it would also require that those targets be implemented faster. More precisely: Twice as fast. In other words: a chimera. No industrialized country would be up for this Herculean endeavor.

It would be fairer to compare what America and Europe plan to do in the future, once Congress has passed its legislation. Then one could see that both continents are neck-and-neck in terms of climate policy, regardless what yardstick is used: overall costs, costs as a share of gross domestic product, or even the percentage reduction in emissions.

Among the most imaginative allegations against Obama is that the man isn't really interested in climate change, and that's why he is leaving the world in the lurch at Copenhagen. But just as a reminder: Shortly after his election, before he had taken office, Obama pledged that his government would shift America's course on climate change. In his economic stimulus package, $80 billion was directed toward green projects including improving the weatherization of homes and the construction of a modern power grid. Exhaust standards for cars, so-called CAFE standards, were tightened. California's strict standards are allowed to pull the rest of the country along. German luxury carmakers are now forced to use more energy-efficient motors in models sold in American than in those sold in Germany.

Under Obama, the Environmental Protection Agency has been given teeth again. In the event Congress fails to pass a climate bill, the agency is threatening to use regulatory avenues to introduce emissions trading.

If the climate bill fails, Obama and the Democrats plan to follow it up with an energy bill. And they appear to have a clear majority for it. The bill would include tougher emissions standards for power plants and stricter energy efficiency requirements for household appliances. Even without emissions trading, the measures add up to an impressive policy shift. Obama "did more for climate protection in the first eight months of his term than his predecessor did in eight years," wrote experts at the Green Party-aligned Heinrich Böll Foundation, not known for pussyfooting around when it comes to climate policy.

From day one, Obama has led his country back to the center of international climate diplomacy. The architecture of a future climate treaty is suddenly no longer contested between the trans-Atlantic partners. There is no longer any dissent over the scope of climate change and the threat it poses to mankind. There is also consensus on the view that all emitters must do their part to reduce them and that industrialized countries must take the lead and provide support for developing nations.

Climate Change Is at the Core of Obama's Agenda

Obama has even put climate policies at the center of bilateral relations with India and China. In the meantime, he has also introduced an emissions reduction goal that US negotiators will take with them to Copenhagen. By doing so, the president is taking a risk domestically. During climate negotiations in Kyoto in 1997, the US president also made a pledge that the Senate didn't want to back. For his part, Obama is now also relying on draft legislation whose passage isn't certain. He's doing so because he views climate protection as a core of his political agenda.

On Dec. 18, he will travel to Copenhagen to use his international prestige to try to make the conference a success. He will show the leadership the world expects of him. The Europeans have a choice: They can reconcile with Obama and, by doing so, increase the chances that a climate package will be approved by Congress. Or they can chide the US for lacking ambition and thus risk a climate policy setback.

Either way, Obama has done all that a single person can possibly do. He has become the greenest president his country has ever seen. 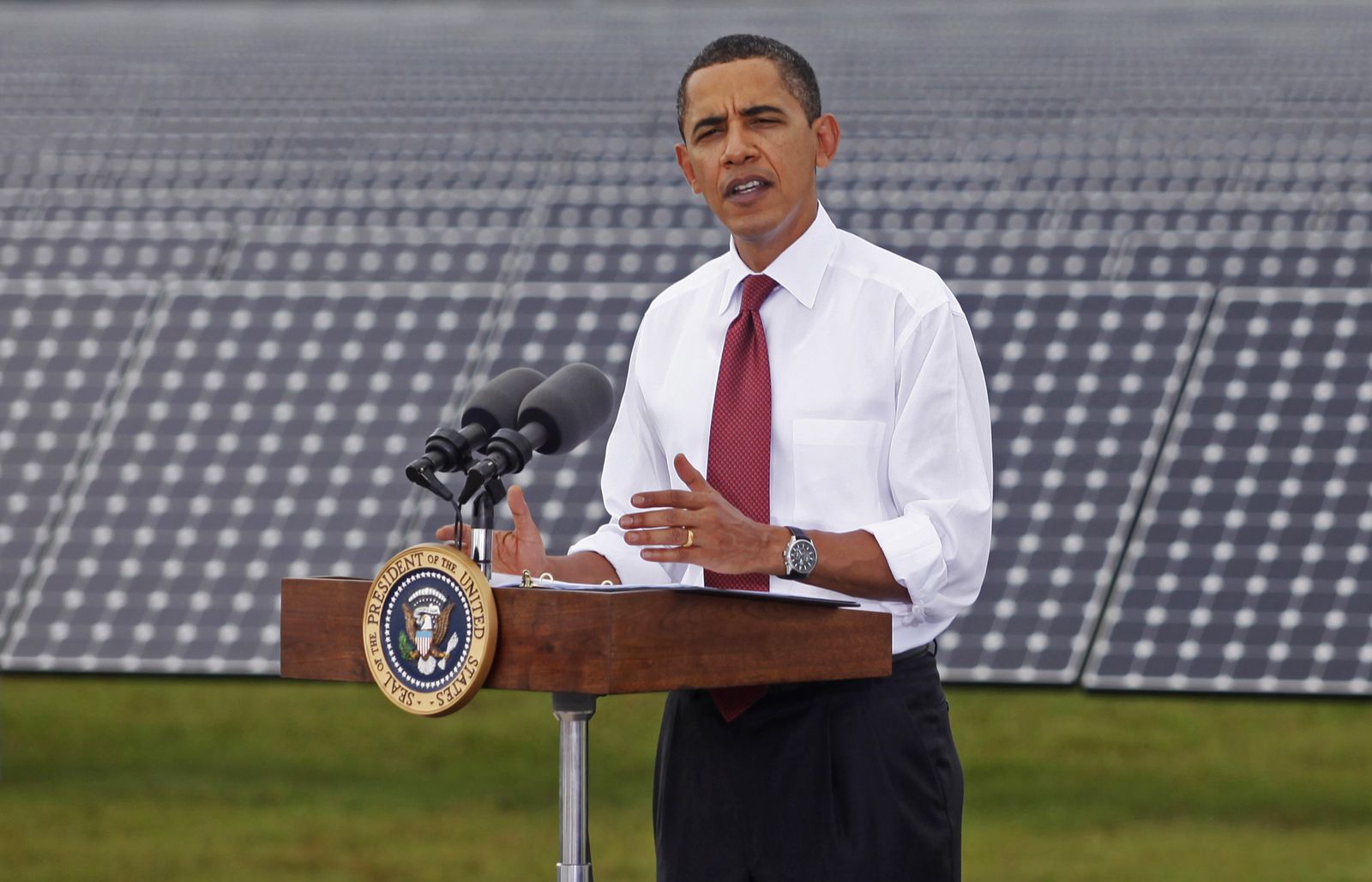 Barack Obama speaks at a solar plant in Arcadia, Florida: The US president has taken a drubbing from critics in Europe recently. Are they wrong?