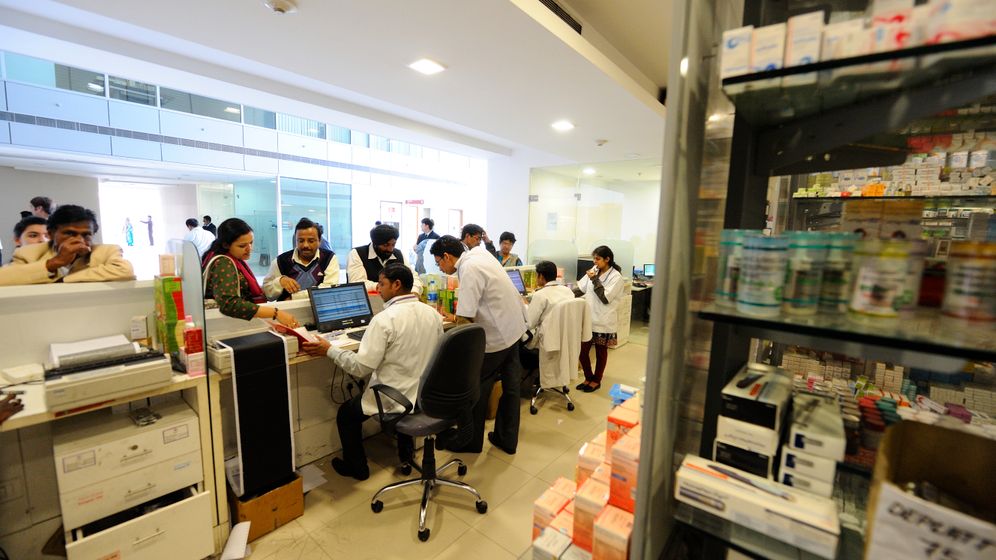 Two uniformed attendants in turbans push open the large wooden door to Courtroom No. 5 at India's Supreme Court, in the heart of New Delhi. Then white-haired Judge Aftab Alam and his equally dignified, gray-haired colleague Ranjana Desai take their seats. Across from them, an army of lawyers in black robes prepares for the next round in the legal dispute between Novartis, the Swiss pharmaceutical giant, and the Indian state -- and, or course, the domestic pharmaceutical competition.

For the last six years, Novartis has been fighting over a patent for its cancer drug Glivec, appearing before Indian authorities and lower courts. The drug has earned billions for Novartis since it was approved in 2001.

Almost 40 countries, including China and Russia, recognize the company's Swiss patents, but India does not. In defending its position, the Indian Patent Office argues that the drug is not a true novelty, but rather a variation of an existing drug. Non-governmental organizations, such as Medecins Sans Frontieres (MSF, also known as Doctors Without Borders), accuse Novartis of trying to extend its monopoly on Glivec for another 20 years by making minor changes to the drug. The 2005 amendment to the Indian Patents Act outlaws the practice known in professional circles as "evergreening."

Cashing in with Copycat Drugs

For the Supreme Court in India's capital, the case is about more than just one drug. And for other multinational pharmaceutical companies, the issue revolves around what they can have patented in India.

On the one hand, they are pursuing the goal of capturing the enormous market on the subcontinent, which is growing as the country of 1.2 billion slowly becomes more affluent. On the other hand, India's own pharmaceutical industry is also taking advantage of its Western competitors' patent disputes to go on the offensive with cheaper copycat drugs, or generics.

MSF is already warning that India's role as what it calls the "pharmacy for the poor" will be in jeopardy if Novartis wins its case before the Supreme Court. Indian companies are known for the production of affordable generic drugs that even those in lower socioeconomic groups can afford. In Africa, for example, Indian generics play in important role in fighting the AIDS epidemic. More than 80 percent of all the AIDS patients treated by humanitarian organizations like MSF get their drugs from factories in India.

On this morning, the attorney for Indian drug maker Cipla is using similar arguments to gain the attention of the judges, who he deferentially addresses as "My Lordship" and "My Ladyship," using the language of India's former colonial rulers. At the same time, the Indians are also self-confidently aware of their role as a country that is catching up to the West in industrial terms.

Other Western pharmaceutical giants are also arguing in court to have their patents recognized in the Indian market. The task is as challenging as it is enormous. As the Indian population ages and becomes more affluent, the middle class, in particular, has a growing need for drugs to treat so-called "lifestyle diseases," such as diabetes and heart ailments.

Good for Poor and Profits

The Indian pharmaceutical market is growing by 10 percent a year, and India ranks among the world's top countries in terms of the volume of drugs sold. The management consulting firm PricewaterhouseCoopers predicts that sales will reach $74 billion (€57 billion) by 2020, or five times the sales figure for 2011.

The economic backbone of the subcontinent is made up of not only call centers and software firms, but also of well over 10,000 drug makers. The Indians are capturing the global market with their generics, as they build bases in Europe and the United States or buy stakes in companies there.

In return, India is doing its utmost to protect domestic drug companies from foreign competitors. Pharmaceutical giants Pfizer and Roche also recently lost patent suits they had filed in India. And, in the spring, the Indian Patent Office forced Bayer, the German pharmaceuticals giant, to give up its patent for the cancer drug Nexavar, thereby paving the way for Natco, an Indian competitor, to produce a generic version.

The Indians invoked the Agreement on Trade-Related Aspects of Intellectual Property Rights (TRIPS), under which countries can issue compulsory licenses for drugs if there is a threat of public health emergency caused by things such as epidemics.

This could be characterized as protecting the domestic pharmaceutical industry -- or as expropriating the competition. In any case, the Indian government is using the trick to massively reduce the prices of drugs like Bayer's Nexavar. Someone using the original drug will pay $5,200 per month, while using the Indian generic would only cost $160.

Even that is expensive for Indians, whose average annual per capita income is only $1,514. What's more, there is often a shortage of doctors and hospitals in rural areas, and even in New Delhi, the health care system is unable to handle the crowds of the poor. For example, there are those who wait in long lines for treatment in front of Safdarjang Hospital, the best hospital in the capital. Many are forced to camp out on the dusty roadside under intense heat.

The 'Robin Hood' of the Pharma Industry

Policymakers are partly to blame for these conditions. The Indian state spends less than 2 percent of GDP on its health care system, or far less than other Asian countries. But the current pharmaceutical dispute has less to do with the dire needs of patients than with patents and profits.

Two men -- Yusuf Hamied, the CEO of Cipla, and Ranjit Shahani, the managing director of Novartis India Ltd. -- illustrate the divisions between the two sides.

Both men are Indian, and they live and work only a few blocks away from each other in Mumbai. Nevertheless, they are bitter adversaries from different worlds.

White-haired Hamied, 76, meets with us on the executive floor of Cipla's headquarters. Employees are celebrating a Hindu festival in the courtyard outside, where they have set up a colorful altar to pray for the safety of the machines and the success of the company. But, more than anything, they are excited about dancing.

The music can be heard in Hamied's office. There are black-and-white photographs of his father, the company founder, as he stands next to Mahatma Gandhi, who toured the company in 1935.

The Hamieds were closely aligned with the Indian struggle for independence from the British, and Hamied feels an obligation to uphold this heritage.

He has just come from Germany. First he was in Dresden, where his best friend, classical conductor Zubin Mehta, gave a concert. Then he visited Berlin, a journey that brought back memories of the city where his parents, an Indian Muslim and a Jewish woman from Lithuania, met. In 1935, when the Nazi regime became too threatening for their taste, they left Berlin and returned to Mumbai, where they founded Cipla and where Yusuf grew up.

Since then, the company has grown into a giant, even among India's generic drug manufacturers, with annual sales of about $1.4 billion and more than half of its drugs being sold abroad. Since Hamied challenged the multinational pharmaceutical companies 11 years ago with his own cocktail of AIDS treatment drugs, which he sold at cost, many of his fellow Indians revere him as a sort of Robin Hood of the industry.

In the early 1970s, it was Hamied who convinced then-Prime Minister Indira Gandhi to break the dominance of the multinational pharmaceutical companies in India. She issued strict regulations for foods and drugs that didn't permit patent protections.

Gandhi's decision marked the beginning of a golden age for companies like Cipla because it amounted to a license to copy Western drugs. The prices of important drugs fell by up to 90 percent. But during the course of India's accession to the World Trade Organization (WTO), in 2005, the country agreed to recognize intellectual property, including drug patents.

Hamied is quick to point out that he is also fundamentally in favor of patents. "After all, I'm a chemist myself," he says. Nevertheless, he is pleased that the 2005 law includes Section 3d, which also plays a role in the legal dispute with Novartis. The passage prohibits "evergreening." For Hamied, patents that are created to maintain existing patent protection by slightly modifying drugs are "frivolous patents."

The Champion of Innovation

Of course, Ranjit Shahani sees things differently, even though he, as a Novartis executive, is clearly playing the more thankless role in his own country. The 65-year-old meets with us in his modest office in a drab concrete building. He began his career with the former British chemical giant ICI before coming to Novartis 15 years ago. Shahani also sees himself as an Indian patriot. He pulls out a brochure depicting smiling people. As part of a program, Novartis provides most Indian patients with Glivec for free.

He is critical of "copycats" like Cipla for ultimately chasing profits for their bosses. He would also say this directly to Hamied, who happens to be a good friend of his. Still, Shahani can't resist maligning his competitor for his luxury penthouse on Regent Street in London and his vineyard in Spain.

Shahani, for his part, says he is worried about India's future. Prime Minister Manmohan Singh's goal of embarking on a "decade of innovation," as he told a group of scientists last year, is an illusion without effective patent protection, says Shahani. Almost with relish, he reports that seven multinational pharmaceutical companies have withdrawn their R&D departments from India in recent years. Since then, members of India's pharmaceutical elite have been conducting their research in Basel or New York.

Shahani also doesn't believe that the 2005 Indian Patents Act guarantees foreign patents in his country. "Even if companies are granted a patent for a drug, it will be infringed," he says. "The only solution is to go to court, but such cases take a long time."

The Hunt for Vulnerable Patents

In the wake of the trials, Indian generic manufacturers, including Natco Pharma, are constantly challenging the multinationals with new products. Natco, with about 2,000 employees, is one of India's smaller companies. But since it received official approval to start producing a generic version of Bayer's Nexavar cancer drug in the spring, Natco has proudly touted itself as the holder of India's first "compulsory license."

The company's drug factory is on the outskirts of Hyderabad, in south-central India. The plant's flat-roofed, utilitarian buildings rise from a rural wasteland of rice fields and stray goats. Inside, however, everything is state-of-the-art. In dust-free rooms, workers wearing masks and special suits sort the tablets coming out of a machine. They earn about 15,000 rupees a month, or roughly €212. Not even the Chinese can compete with wages this low.

The pills are then packaged for export. One is a generic version of the well-known breast cancer drug anastrozole. The logos of various German manufacturers for which Natco works are printed on the packages. Of course, German patients would never suspect that the contents are actually made in India, manager Rami Reddy says with a smile. After all, who would know that the number 164, printed in tiny letters, is the Indian manufacturer's license code?

Natco sees its future in the field of cancer drugs. Its executives in Hyderabad are constantly searching for the drugs of multinationals whose patents are about to expire or have little chance of being recognized in India. Giant markets are waiting in the West, which is why the heads of India's pharmaceutical companies are relatively nonchalant about the Novartis trial before the Supreme Court.

A few weeks ago, Judge Alam encouraged them when he criticized the price of the cancer drug Glivec, which costs 120,000 rupees a month (€1,700). "Medicine prices are already too high in India," he muttered, and then advised the Novartis attorney to "sell it at five rupees!" If it did that, he added, Novartis could drive out all of its competitors with one blow.

The lawyers for the big drug makers were unimpressed.