They placed the photo of the dead man in the entrance of the hut. A lightbulb illuminating his face makes it look like that of a saint. The bereaved widow has her four children stand in front of the photo. They have lost their breadwinner, and now they can only hope that he will continue to somehow feed them even after death. Opponents of nuclear power in India view him as a martyr and are collecting donations for the family.

Sahayam Francis was only 42, and now his picture is displayed everywhere on the straw-roofed houses of Idinthakarai, a fishing village in the state of Tamil Nadu, on the southern tip of the Indian subcontinent. It looks like an idyllic place, where fisherman spread their catches out to dry on the beach and repair their nets while sitting under palm trees. But it's a deceptive paradise.

A few kilometers to the southwest, the new Kudankulam Nuclear Power Plant, built with Russian technology, towers over the haze. In September, the Supreme Court in New Delhi dismissed a lawsuit filed by opponents of nuclear power who were trying to block the loading of fuel at the plant. Now the countdown continues, and the first reactor could be ready for start-up by the end of the year, with the second one to follow shortly thereafter. The reactors are expected to generate a total of 2,000 megawatts of electricity to help satisfy some of the rising economic power's thirst for energy.

On the day of the accident, Sahayam and his neighbors were protesting against the plant. They had formed a human chain in the shallow water, the women wearing colorful saris and the men carrying black flags. Sahayam was standing on a breakwater when a coast guard plane suddenly made a low pass over the crowd. Sahayam's family says that he was so startled that he fell headfirst onto the rocks, dying a short time later.

"They surrounded us like prisoners," complains S. P. Udayakumar, the 53-year-old leader of the nationwide People's Movement Against Nuclear Energy. Udayakumar, who studied political science at American universities, has gathered the villagers in front of the church in Idinthakarai, where he preaches about the evils of nuclear power on a daily basis.

Udayakumar says that millions of people living along the coast could be exposed to radiation if the government continues to pursue its ambitious nuclear program. He spreads out his hand to illustrate the shape of the subcontinent. "Here, here and here," he says. "They want to build nuclear power plants everywhere, and they'll contaminate our ocean and our fish populations."

Dressed in a white robe, Udayakumar looks like a cross between a guru and a guerilla leader. He and several hundred of his fellow activists risk arrest on charges of agitation and other alleged offences.

Were any lessons learned from Fukushima? What about phasing out nuclear power? The Japanese reactor disaster in March 2011 did little more than briefly stun India's government. Now it is pressing forward with its plans to expand nuclear energy, often against fierce resistance.

The new Kudankulam power plant is intended as only one stage in India's program. Between now and 2032, the government plans to expand the country's nuclear capacity from 4,400 to roughly 63,000 megawatts.

By 2050, India even expects to satisfy a quarter of its electricity demands with nuclear energy. Today, about 20 reactors generate roughly 4 percent of India's electricity, but the country plans to double its nuclear energy capacity in the next five years alone. In doing so, the Indians will rely on particularly controversial reactor types. To make matters worse, many doubt that India -- with its bizarre infrastructure and often chaotic organization -- can keep the technology under control.

Still, the nation of 1.2 billion urgently needs energy, as became glaringly evident last summer when large sections of the country went without power for days and more than 600 million people suffered in the heat without electricity. Blackouts are a common occurrence, and the lights go out, air-conditioners stop running and elevators get stuck every day even in the capital city of New Delhi.

Often inefficiently operated coal-fired power plants and chronic corruption are to blame for India's disastrous power supply. In many states, for example, local politicians illegally tap electricity from the grid and then secure votes by supplying

households with free power. In addition, the central and local governments are constantly jostling over how energy is allocated.

Given these circumstances, India's business community, in particular, views nuclear power as a surefire way to stimulate growth. Impatient backers of nuclear energy even want to see controversial reactors placed directly under the control of the military.

A Symbol of Independence

Kudankulam is already practically under a state of martial law. Journalists who travel to the area are followed and sometimes arrested. Fishermen in Idinthakarai claim that police officers and thugs in civilian clothes recently combed the village for Udayakumar and other activists, albeit unsuccessfully. Before the frustrated intruders left, say villagers, they urinated in the church and desecrated a statue of the Virgin Mary. As evidence, one of the nuclear-power opponents holds up the statue's severed head.

Jawaharlal Nehru, the country's legendary first prime minister (1947-1964), promoted nuclear development. "We must develop this atomic energy quite apart from war," he insisted, though he added that India could "use it for other purposes" if compelled. Ever since, it has been viewed as a symbol of independence, making a phase-out inconceivable for planners in New Delhi.

Indian reactors supplied the plutonium for the country's first nuclear test in 1974, a decade after China detonated its first nuclear bomb. In 1998, the entire nation celebrated further denotations, which gave India a permanent place among nuclear powers. Military leaders named their project "Shakti," the Sanskrit word for "strength." Soon afterwards, Pakistan, India's nemesis to the north, detonated its own nuclear bombs.

American, French, Russian and Japanese companies all want to develop the subcontinent as a market for nuclear power plants. Since the Fukushima disaster, they have been eagerly looking toward India -- because they've been having more trouble selling their technologies at home.

India currently needs foreign uranium to power its reactors. In the long term, however, it hopes to free itself from foreign sources by developing what it needs to complete the full nuclear-reprocessing cycle.

To this end, India's planners are clinging to questionable technologies, such as fast breeder reactors operated with plutonium as well as ones that use thorium. Germany, by comparison, abandoned a similar test plant in the late 1980s because it was too expensive and prone to failure.

But how is India, a developing country, supposed to master a technology that even proved too much for a perfectionist, industrialized nation like Japan to keep under control?

Indeed, there are already growing doubts about the safety of Indian nuclear plants. In August, the country's general accounting office released a devastating critique of the domestic nuclear regulatory agency, noting that more than half of inspection reports were submitted late and that a number of inspections were never even performed.

The government intends to set up a new, independent monitoring agency. But nuclear opponents fear that even this agency could devolve into a vicarious agent of the nuclear lobby.

Arundhati Roy, the novelist and political activist, says that the government lacks the know-how needed to safely operate nuclear power plants. "The Indian government has shown itself incapable of even being able to dispose of day to day garbage, let alone industrial effluent or urban sewage," she scoffed in a message of solidarity to opponents of the plant in Kudankulam. "How does it dare to say that it knows how to deal with nuclear waste?"

Though she might sound rhetorical, Roy is merely describing the sad reality of those living near the power plant. In fact, there are even piles of garbage in front of the local police station. Likewise, the Nuclear Power Corporation of India, the state-owned company that operates Kudankulam and other reactors, has yet to present a plan for how to permanently dispose of nuclear waste.

However, India's parliament has passed a compensation law that obligates the operators of nuclear power plants and their suppliers to compensate victims should there be a reactor disaster. This is one reason why foreign companies are currently holding off on signing agreements to deliver new reactors to India.

The ongoing struggle over Kudankulam should also dampen the nuclear lobby's enthusiasm. The original contract for the project was signed in 1988 by former Indian Prime Minister Rajiv Gandhi and then-Soviet leader Mikhail Gorbachev. 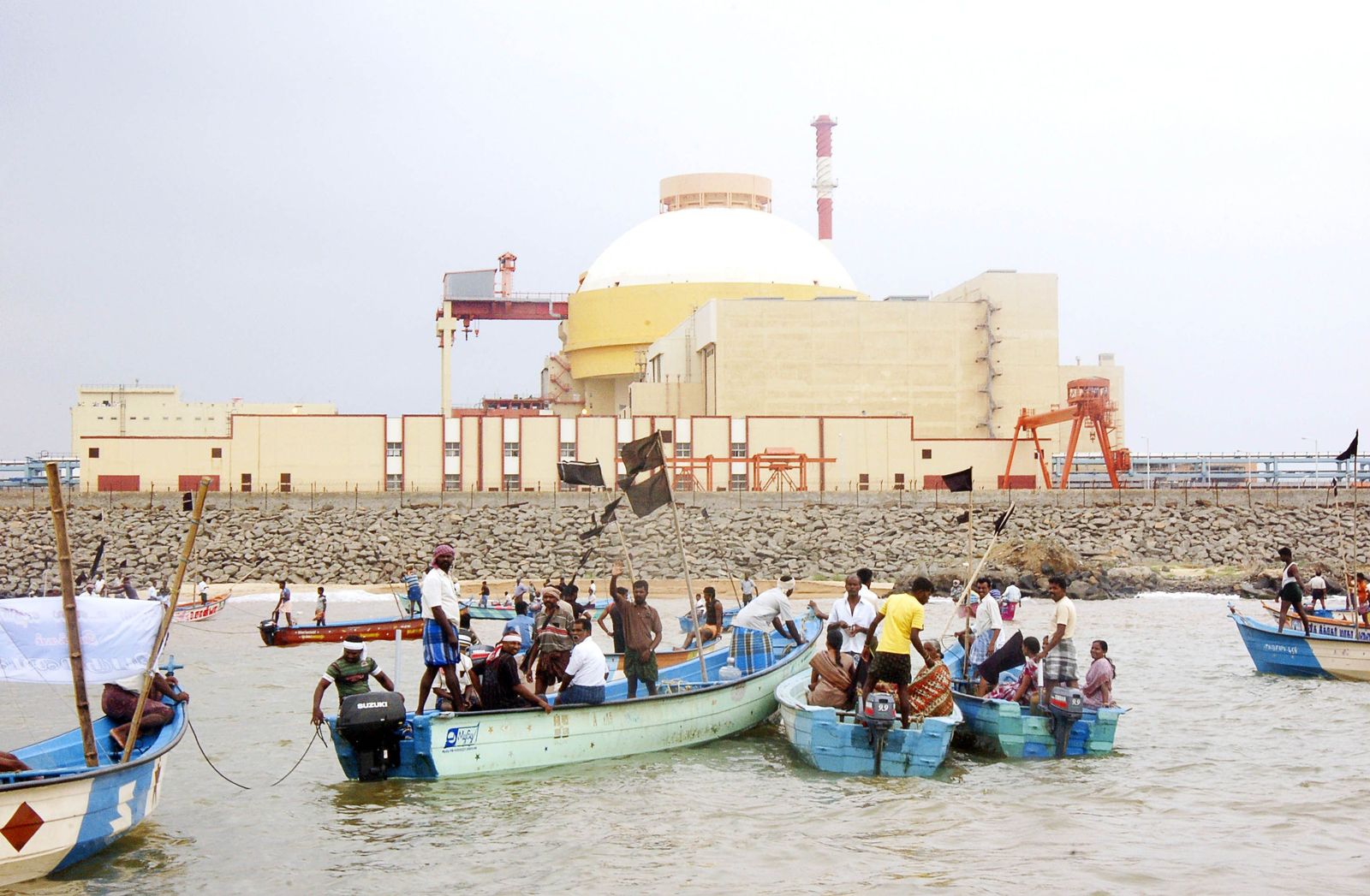