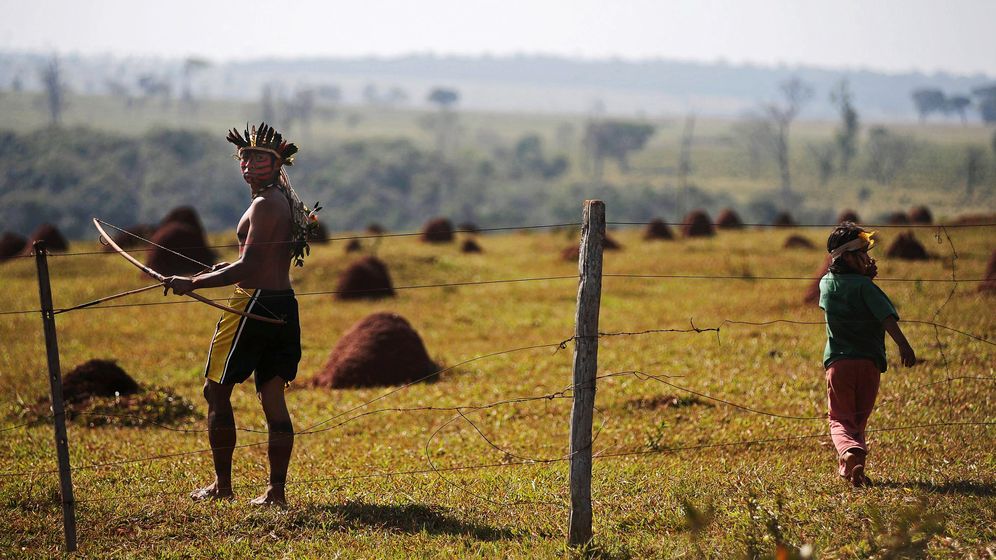 When the helicopter appears above the tops of the mango trees, Alberto, a headman with the Terena tribe, raises his spear into the air, shouts a war cry and calls his men together. About 200 members of the tribe congregate on a meadow. Some shoot arrows at the helicopter, while others swing clubs and cock catapults. Many are wearing headdresses and war paint. "This land belongs to us!" the chief shouts. The helicopter rattles away into the distance.

The police helicopters fly across Fazenda Buriti, a large cattle range in the Brazilian state of Mato Grosso do Sul, two or three times a day. Indigenous people armed with clubs are guarding the entrance of the ranch, which they have occupied for the last three months.

Fazenda Buriti is one of 62 farms in the state that the indigenous people have overrun, part of their revolt against the government from the Amazon region to the southern Pampas area. They are fighting for their land, protecting the borders of their reservations, resisting the construction of hydroelectric power plants in their regions and protesting against the advance of the agricultural industry, which is destroying their homeland.

The occupations are a reaction to Brazil's ruthless treatment of its indigenous peoples. Thirteen years ago, the government promised to turn over the ranch's 145 square kilometers (56 square miles) to indigenous tribes. But the farmer used legal maneuvers to delay the transfer -- until the indigenous people lost patience. With the help of Facebook, they gathered together more than 1,000 members of their tribe from the surrounding region and invaded the farm in the early morning of May 15, wielding homemade explosives, swinging wooden clubs and waving spears. Private security guards fired into the air, but they were vastly outnumbered. Together with the rancher's wife, family and members of the staff, they took refuge in the house. After tough negotiations, the owners were allowed to leave. The police moved in with live ammunition 15 days later. One of the occupiers was shot to death and another one was wounded, but the indigenous people are not giving up.

Since then, the Terena have built a village on the grounds of Fazenda Buriti. They are farming the fields, planting manioc and corn; some are driving around in the farmer's tractors. At night, they sleep in huts made of wood and plastic sheeting. "Our reservations are too small," says Chief Alberto. "If we don't get more land, my people will go hungry."

Looking for a Decent Price

When the police tried to storm the farm, the occupiers burned down the farmer's house. "We have nothing against the farmers," insists the Terena chief. "We want the government to compensate them."

The farmers and the indigenous people agree on this point. "If the government pays a decent price, I'll sell right away," says owner Ricardo Bacha, a former member of the state parliament. He is now negotiating with government officials over compensation.

Rancher Bacha is sitting in the office of the powerful farmers' association in the state capital Campo Grande, an imposing glass-and-steel structure, surrounded by organization officials. He is wearing a plaid shirt and jeans, and his face is tanned. He inherited the farm from his grandfather, who was given the land by the government in 1927.

The land used to belong to Paraguay, until Brazil annexed it in 1870, after a war. At the time, the government drew the new border straight through ethnic communities, and it had the indigenous people rounded up like cattle and locked away on reservations. Then it divided up the land among white settlers.

Once the military dictatorship ended in the mid-1980s, Brazil received a new, democratic constitution. It awarded the indigenous peoples the rights to the regions from which they had been expelled decades earlier. But the land, once covered by jungles, now consists of soybean and sugarcane plantations as well as grazing land for cattle.

The factory farms have expanded their cropland in Mato Grosso do Sul by more than 30 percent in the last four years; the state has some of the most fertile soil in the country. "We won't give up the estates voluntarily," says Bacha who, like most of the farmers, carries a weapon. "I'm not going to face off against 300 wild Indians without a gun." He has also hired a private security service notorious for its brutality.

Capitulating to the Farm Lobby

That some farmers will stop at nothing is well known. Some 564 members of indigenous tribes were murdered in Brazil in the last decade, including 319 in Mato Grosso do Sul alone. In February, three farm guards shot and killed a 15-year-old boy, merely because he wanted to fish on the estate.

The government, meanwhile, has capitulated to the farm lobby. When President Dilma Rousseff visited Mato Grosso do Sul in April, the farmers booed her. Soon afterwards, she completed a radical shift on indigenous policy by freezing the planned reservation expansions. She also plans to amend the approval process.

The National Indian Foundation, FUNAI -- a group run by anthropologists -- is currently in charge of drawing the new borders. But Rousseff now wants to consult with other organizations, including EMBRAPA, an agricultural research institute affiliated with white farmers.

"Rousseff has deprived FUNAI of its power," says former priest Egon Heck, a Brazilian of German descent, of the church aid organization CIMI. The products produced by large landowners contribute substantially to Brazil's export revenues, and ranchers can always find a sympathetic ear with the president. In contrast, she has never met with lawmakers who represent the indigenous peoples. "They have no lobby," says Heck.

There are 305 tribes in Brazil, and they speak 274 different languages. But not all tribes are as combative as the Terena. The Guaraní, for example, the largest indigenous population group in Mato Grosso do Sul, tend to direct their despair against themselves with their headmen reporting a dramatic rise in suicides recently. Some 56 Guaraní committed suicide last year alone. Most were youths.

Since the Guaraní lost their land to farmers, they have had to take on work outside their communities, working as day laborers on sugarcane plantations, for example. "Suicide isn't really part of our culture," says Wilson Matos, an attorney. "Young people are killing themselves because their homeland has been destroyed. When you take away a Guaraní's land, you rob him of his life."

Matos, the son of a Guaraní father and a Terena mother, lived on a reservation until he was 14. Then he became the first member of an indigenous tribe in Mato Grosso do Sul to embark on a career as a lawyer. He ran the region's Indian authority, and now he defends indigenous offenders. He claims that need drives most of them to commit their crimes.

His fellow tribe member Evaldemir Cáceres, for example, lives with his extended family next to a four-lane highway on the outskirts of the provincial city of Dourados. The tribe members have patched together huts out of plastic sheeting and wood and the shantytown is home to 86 people. There is no electricity or running water, the children play in the dirt and most can neither read nor write.

They were promised a large tract of land near Dourados 43 years ago, but the establishment of this new reservation was repeatedly delayed. Instead, they were left with the miserable spot between the road and a brickyard where they now live. They receive a small amount of social welfare from the government. They grow manioc behind the huts, and pay rent to a landowner for the beds. White gunmen on motorcycles circle the shantytown at night, threatening women and children. The goal, say the tribe members, is to intimidate them.

At the end of last year, Cáceres and the other Guaraní headmen wrote in a letter to the government: "Send us poison so we can kill ourselves!"

They are still waiting for an answer. 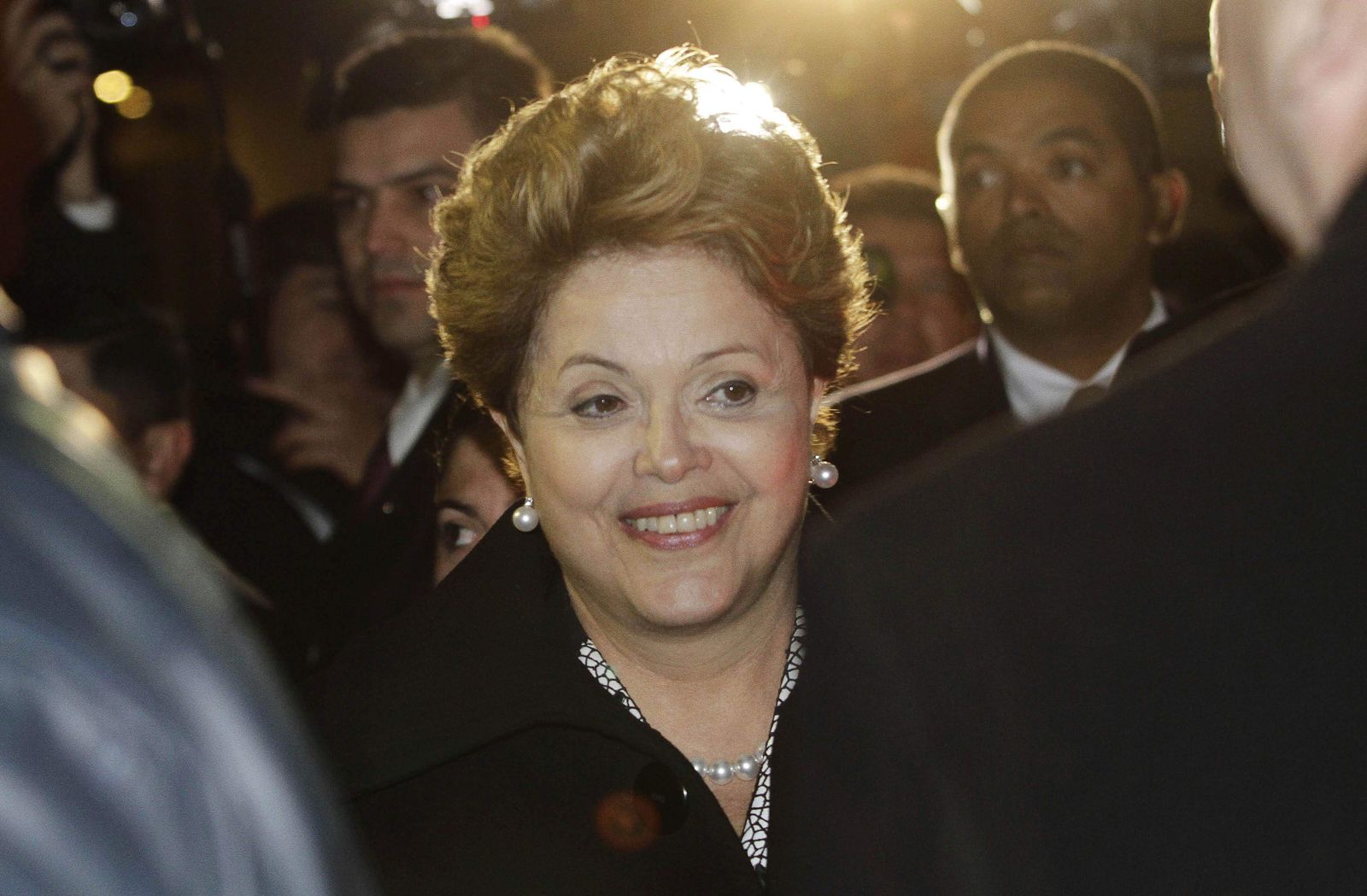 Brazilian President Dilma Rousseff. She completed her about face on indigenous policy this spring.