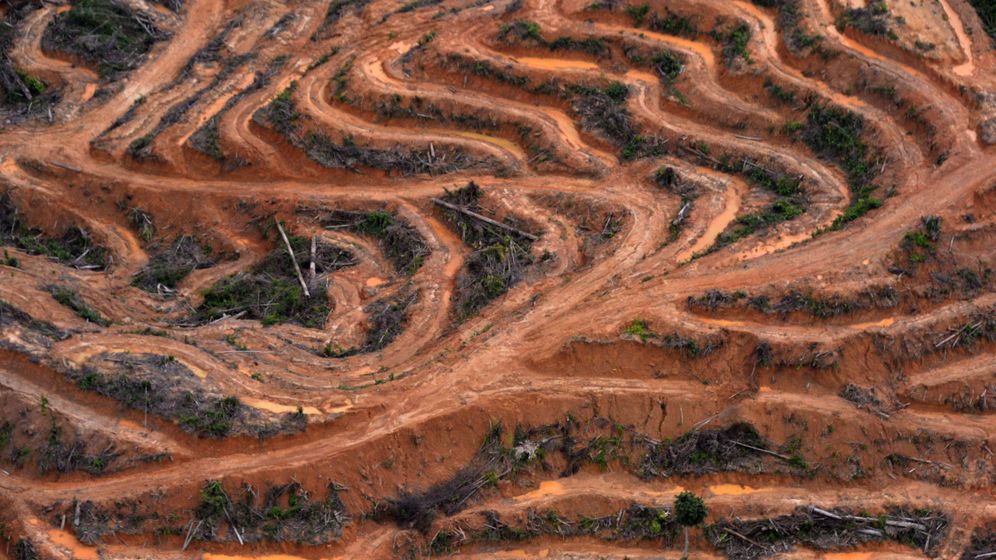 Two months ago, soldiers abducted day laborer Titus, hit him with the butts of their rifles, whipped him and then let him wipe off the blood. It was only later that he found out the reason for his torture. A sign had been placed in his village, Bungku, stating, "This is our land."

Bangku is located at the center of Indonesia's Sumatra island. It's a city full of people that have been pushed off their property and has been a flash point for years in one of the country's bloodiest land conflicts. Palm oil is at the center of the dispute. Almost every second product available in today's supermarkets contains the cheap natural resource, which is often labeled as "vegetable oil," masking its true identity. Palm oil can be found in shampoos, but also in margarine, frozen pizzas, ice cream and lipstick.

There are hundreds of conflicts over land with palm oil companies in Indonesia, but Bungku is considered to be one of the worst. The area's forest, which once provided nourishment to those who lived there, fell victim to the giant palm oil plantations of the firm Asiatic Persada in the mid-1980s. In the following years, the company's bulldozers illegally claimed a further 20,000 hectares (49,000 acres) of rain forest -- an area about half the size of Berlin. Included were areas for which indigenous people's held guaranteed land rights. But they were of little use against the palm oil industry.

On numerous occasions, mercenaries drove out village residents who attempted to return to the "land of our forefathers," as they say. The most recent incident happened only months ago. It's an unequal battle because it essentially pits tribal people against the henchmen of multinational behemoths like Wilmar.

The conflict escalated on March 5, when day laborer Titus was dragged by soldiers from his home to a palm oil mill. Members of his family and tribes demanded his release, whereupon soldiers beat six of them to the point they had to be taken to the hospital. One, Pujiono, the 35-year-old father of three children, didn't survive the torture.

"The World Bank also bears some responsibility for the death toll," says Feri Irawan, an environmental activist based in the nearby city of Jambi who has been observing the conflict for years. Irawan says the World Bank long showered Wilmar with loans, in complete disregard for the company's tangle of land conflicts.

In 2012, a World Bank mediator began looking at the conflict. Company officials say the negotiations were difficult and accuse the nomads of theft of palm fruits. But the mediators' interim report identified numerous property rights violation perpetrated by the former Wilmar subsidiary Asiatic Persada. They are allegations that don't jibe with the environmentally friendly veneer with which Wilmar has been seeking to present itself in recent years through efforts like partnering with nature conservation group WWF on the Roundtable on Sustainable Palm Oil.

Keeping it in the Family

In the end, the company decided to divest itself of the subsidiary. A spokeswoman for Wilmar said the social conflicts had created an "intolerable situation" for the company. Last year, the Ganda Group acquired Asiatic Persada.

Asiatic, though, stayed in the family. Ganda owner Ganda Sitorus is the younger brother of Martua Sitorus, the co-founder of Wilmar International, which is a popular stock for German investors. Both Deutsche Bank and the investment division of international insurance giant Allianz have invested in the palm oil boom. Deutsche Bank, which claims that it is involved in efforts to stop deforestation, not only supports Wilmar through its funds, it also provides financial support to company supplier Bumitama, a firm that has been accused of clear-cutting in Borneo. A bank spokesperson said Deutsche's "current holdings are of limited significance."

Other German companies have also played a role in the conflict. When it reviewed the palm oil operations, employees at German sustainability auditor TÜV Rheinland deliberately played down the clearing of settlements in an earlier report for Wilmar. TÜV auditors now concede they acted incorrectly at the time.

Ganda Sitorus, in any case, himself a former Wilmar employee, has used his own company to create a clearinghouse for troublesome Wilmar subsidiaries that could be a threat to the publicly traded corporation's reputation.

The system appears to be tried and tested. Several years ago, the non-government organization Friends of the Earth documented how Wilmar subsidiaries had been involved in deforestation activities in Borneo. At the time, Wilmar described itself as a "responsible" company. A short time later, Wilmar moved to sell the controversial firms. One of the buyers was Ganda Sitorus.

In the conflict surrounding Asiatic Persada, Ganda Sitorus has shown few, if any, signs of social responsibility. The new owner, the World Bank mediator said, has shown "no willingness" to discuss the issue. Instead, it has "driven residents of several villages out of their homes." In September, the company announced it would cease participation in mediation efforts.

Has Wilmar Cleaned Up Its Act?

At the same time, Wilmar presented itself as a fully transformed company. On Dec. 5, the multinational announced it would only continue to supply palm oil that originates from sources that do not involve deforestation or the displacement of people. It appears pressures from Wilmar's major customers prompted the move. The conflict on Sumatra had already caused a nuissance for food giant Unilever once before. At the end of 2011, village residents driven out by palm oil production protested in front of Unilever's German headquarters in Hamburg. They held up signs reading, "Rama -- Land theft for breakfast," a reference to the company's popular margarine product.

Some, though, have continued asking if it is truly possible that Wilmar is preventing palm oil from dubious plantations from landing in products that we consume each day. Officials at Unilever insist that it is. And Wilmar confirmed that it does not receive supplies from the disputed areas.

Indonesian media, though, have reported that the Ganda Group has been supplying Wilmar for quite some time. Wilmar officials have also confirmed this, but claim that deliveries were suspended in March. The company also maintains it has not purchased anything from Asiatic since the firm's sale, including fruit or palm oil from its mills near Jambi.

Christiane Zander, an official with the group Rainforest Rescue, has doubts that links have really been cut. She knows the area and visited Indonesia in March in order to investigate the intricate supply chain. Zander suspects that oil from Asiatic Persada is still making its way to Wilmar through indirect channels.

She says that people in Bungku told her that trucks with Wilmar logos were painted over following the violent incident in March. She also followed the tracks of tanker trucks that led aways from the Asiatic mills -- and says they appeared the next morning at the port of Jambi in front of a palm oil storage facility called Pelita. "The Wilmar depot was empty," she says, "but there was a line of tank trucks at Pelita. Employees there said that they work together with Wilmar."

A spokeswoman at Wilmar admitted that the depot had in fact been used until January 2014, but they had not been used to transfer oil from Asiatic Persada, by far the largest mill in the area.

The conflict over the plantations has since become an issue for the national government in Jakarta. Last October, the governor of Jambi urged officials to review Asiatic Persada's license because of violations of the law. Copies of the letter were also sent to the Justice Ministry and the national police chief.

Still, it's unlikely that will do much to change the situation. The Sitorus family, which owns the company, has good ties with the government. A former general, a former attorney general and a former police chief sit on the boards of companies owned by the family.

In mid-April, the Jakarta Post reported that a Wilmar subsidiary had felled a mangrove forest on Borneo for new plantations. The question of how that move could be compatible with the firm's new policy of "zero deforestation" was left unanswered by the spokesman.