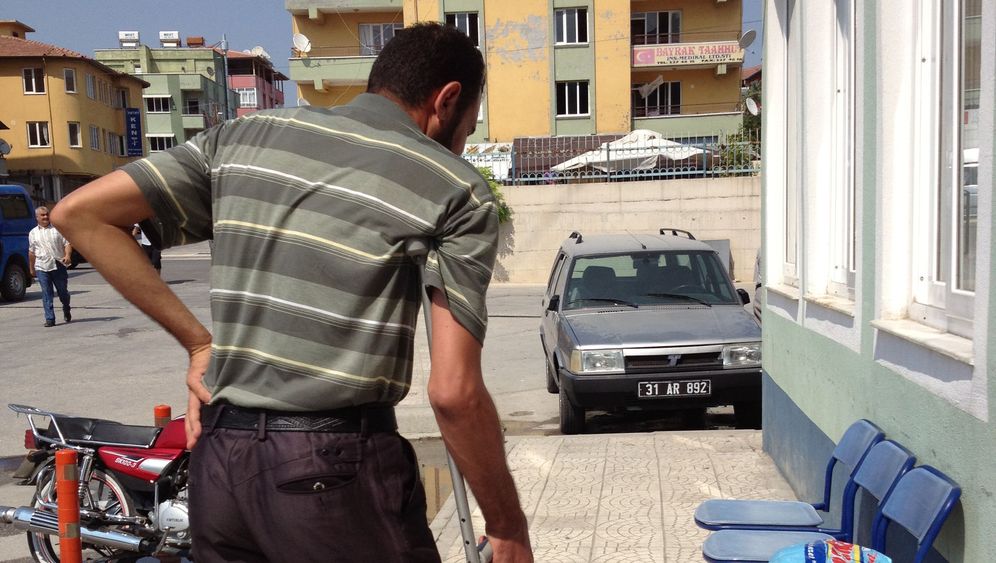 These days, Syrian rebels sometimes seem to know more about the public hospital in the Turkish city of Antakya -- known in ancient times as Antioch -- than the health professionals working there. The Turkish nurses, doctors and ward heads aren't even sure how many Syrians are currently being treated at the hospital. But Yasser does. "We currently have around 50 fighters with the Free Syrian Army being provided with treatment," he says. "Three of them are in the orthopaedic ward; please follow me." He then limps ahead through the emergency room's hallways, which are overflowing with patients.

The only thing that reveals the fact that Yasser is an injured rebel is the thick bandage on his left foot. With his Adidas shirt, baseball cap and sandals, the jovial 30-year-old looks like he could be on vacation. He's also so frail that it would be hard to imagine him carrying an AK-47. But only two months ago, he was using one for the first time to fire against the soldiers of Syrian President Bashar Assad.

"My home was under threat," Yasser says. "So I grabbed my weapon. I had to protect my family." He's originally from Haffa, a small city in the mountainous backcountry along the coast. In June, the city made international headlines when the Syrian army began an offensive on Haffa with artillery and combat helicopters. The army first permitted United Nations observers to enter the city in mid-June. By then, nary a soul could be found in Haffa.

Yasser's wife fled with their 2-year-old daughter a few dozen kilometres north to the Mount Aqra region, where they are still holding out with other refugees. Yasser stayed behind, hiding together with a group of 35 other rebels near the city. They engaged in gun battles several times with Syrian soldiers and militias aligned with the regime. This continued until July 9. That day, Yasser had a bad feeling. "I knew something was going to go wrong that Monday," he says. That afternoon, two bullets struck his foot, shattering his metatarsal bones. That evening, the rebels had to retreat.

A dangerous trip ensued. Injured rebels cannot seek treatment in Syrian hospitals since their wounds would immediately out them as regime opponents. If caught, they are threatened with arrest and possible death. Instead, insurgents have set up an underground network of makeshift clinics, but even those aren't totally safe for the injured. If government troops identify rebel medical facilities, they can quickly be targeted for attack.

Rebels loaded the injured Yasser into a car and drove him to a location near the Turkish border. They carried him for the last kilometer in order to prevent him from being discovered by Syrian border guards. Then they set him down on the other side of the border and called the public hospital at Antakya, which dispatched an ambulance to pick him up.

'I Want To Go Back as Quickly as Possible'

"I am safe in Antakya," Yasser says. "I can nurse my broken foot here." Doctors placed two metal rods in his foot in order to allow the shattered bone to grow back together.

Each night, ambulances leave from Antakya to the Turkish-Syrian border to pick up wounded men. Syrian rebels are treated for free in three hospitals in the city of 200,000 residents. They are provided with accommodation in nearby refugee camps and ferried to the hospitals on shuttle buses. "What the Turkish government is doing for us is good," Yasser says. He wants to bring his family to Turkey to join him. "It may not be a good life in the camp since there's nothing to do," he says. "But it is a safe one."

Almost all of the Syrians awaiting treatment at the hospital in Antakya come from Syria's northern coastal region, where Sunni and Alawite Muslims are clashing. Several refugees accuse the regime-aligned troops and militias of deliberately driving Sunnis out of the region, which is considered the ancestral homeland of the Alawites, a minority Muslim sect of which Assad is also a member.

But few of the wounded from the northern Idlib province are still to be found in Antakya. It appears that the rebels have secured Idlib to the point that they are now able to provide treatment for the injured there. "There is nothing left of the regime in Idlib," one rebel said.

For his part, Yasser doesn't want to stay in Antakya. "I'm just here to recuperate," he says. He still has to stay here for another 10 days, at which point his foot should be more or less working again. "I want to go back as quickly as possible, to fight," he says.